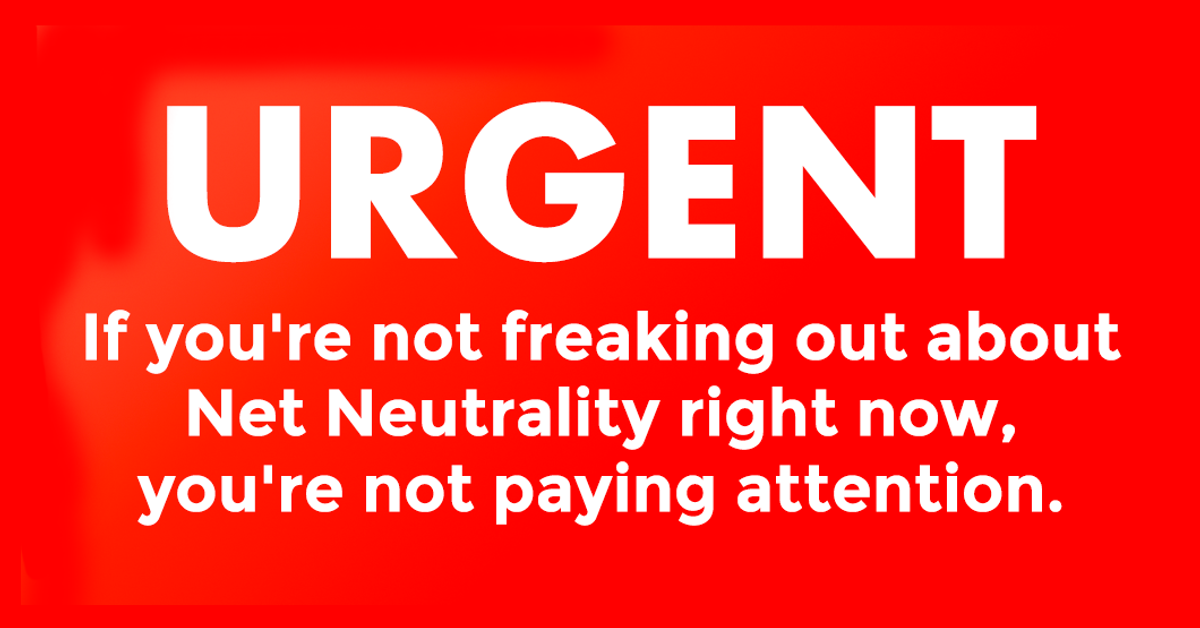 On December 14th, Congress will vote whether or not to repeal net neutrality. In 2015, through the Obama Administration, people of the internet were able to successfully fight for net neutrality rules, but now, that is at stake once again.

On May 15, 2014, the FCC stated that it would consider two options: either allow fast and slow broadband, effectively getting rid of net neutrality, or reclassify broadband as a telecommunication service, preserving net neutrality.

Due to heavy criticism and intense activism against the FCC, the people were victorious. On November 10, 2014, President Obama recommended that the FCC reclassify internet service providers (ISPs) under Title II of the Communications Act of 1936 as a common carrier, which effectively preserved net neutrality.

What is net neutrality?

Net neutrality is the principle that internet service providers (ISPs) should not control what websites consumers go on and what content consumers are able to access. The current net neutrality rules enforce that internet providers treat all data the same and not charge differently depending on factors such as user, content, platform or application. In other words, companies like Verizon and Comcast can't dictate what content you can or cannot access on the internet.

Why does all of this matter?

Well, let's suppose that you decide to go on Twitter or Facebook and all of a sudden, you get an alert saying you have to upgrade your internet plan to access the website. Or, maybe you have a research paper that's due by midnight but every single website you on go requires that you pay to see the information. Better yet, you have a startup business and want put up a website when your internet provider says you have to pay an exorbitant amount of money if you want that website to go live.

Or maybe you are a part of Odyssey and all of a sudden, your voice can't be heard.

The abolition of net neutrality puts the power in the hands of ISPs, so the companies can do what produces the most profit for them. For example, Spectrum has their own video streaming service and its main competitors are Hulu and Netflix. With the abolition of net neutrality, Spectrum could slow down the speed of its competitors to the point of making the service unusable—so, goodbye Stranger Things!

Taking a stance for net neutrality isn't a political agenda. It's a fight to keep our free speech, prevent the manipulation of public perception from ISPs and stop the possibility of augmenting corporate interests.

What can you do?

There are five members on the FCC board who will vote on this issue. Mignon Clyburn and Jessica Rosenworcel are both against the abolition of net neutrality. Ajit Pai, Brendan Carr, and Michael O'Rielly are for the abolition of net neutrality. If you care about your access to the internet, then do something. Write to the latter three commissioners, bombard them with letters, incessantly tweet to them—take action. You could even write to your congress representatives, expressing your sentiments.

Battle for the Net | Save The Internet are great resources that will help set you on the right track and give you the necessary resources to make your voice heard.

The chairman of the FCC, Ajit Pai proposes this repeal under an outrageously dishonest title, “Restoring Internet Freedom Act.” Without a doubt, this act wouldn’t restore any sense of freedom but will result in financial gains for big ISP companies.

Pai wrote an article on the Wall Street Journal expressing his sentiments towards the current net neutrality rules. He argues that the current rules restrict competition—a deeper look into his beliefs show that he is a proponent of the free-market and believes competition to be the driving force in economic growth.

However, there seems to be a dissonance between what he believes and what the “Restoring Internet Freedom Act” will do. Pai states that the new overruling will allow the FCC to “require internet service providers to be transparent so that consumers can buy the plan that’s best for them…The Federal Trade Commission would police ISP, protect consumers and promote competition.”

Pai argues that net neutrality prevents small ISPs from gaining a foot in the industry; however, Ars Technica reported that thirty small ISP companies wrote to Pai, rejecting the notion that net neutrality is threatening their growth. Pai also claims that there was a nine percent drop in yearly capital expenditures from wireless companies, which indicated declining competition as companies were less willing to spend money; however, further research shows that his claims are completely fallacious and he has cherry picked the data to only prove his point.

Former FCC chairman, Tom Wheeler, also expressed his concerns in an interview, “The job of the FCC is to represent the consumer…Tragically, this decision is only for the benefit of the largely monopoly services that deliver the Internet to the consumer.”

The new act would enforce transparency from ISPs, and companies will be held accountable to such rules by the Federal Trade Commission. You know those terms and conditions you agree to without ever reading? Well, basically, this act would make companies inform their consumers if they choose to block or slow down certain websites or simply gave preferable treatment to content, except it's just in the fine print.

How does this contrast to the current situation? Right now, there are clear bans against specifically blocking or slowing down websites and speeding up certain websites that agree to pay ISPs a fee. With the Restoring Internet Freedom Act, consumers would have to rely on public promises of ISPs, and we all know we can't really trust all corporate promises.

And if you still don't think net neutrality still isn't that important, I'll let Homer do the speaking.