My Review of Black Friday
Odyssey

My Review of Black Friday 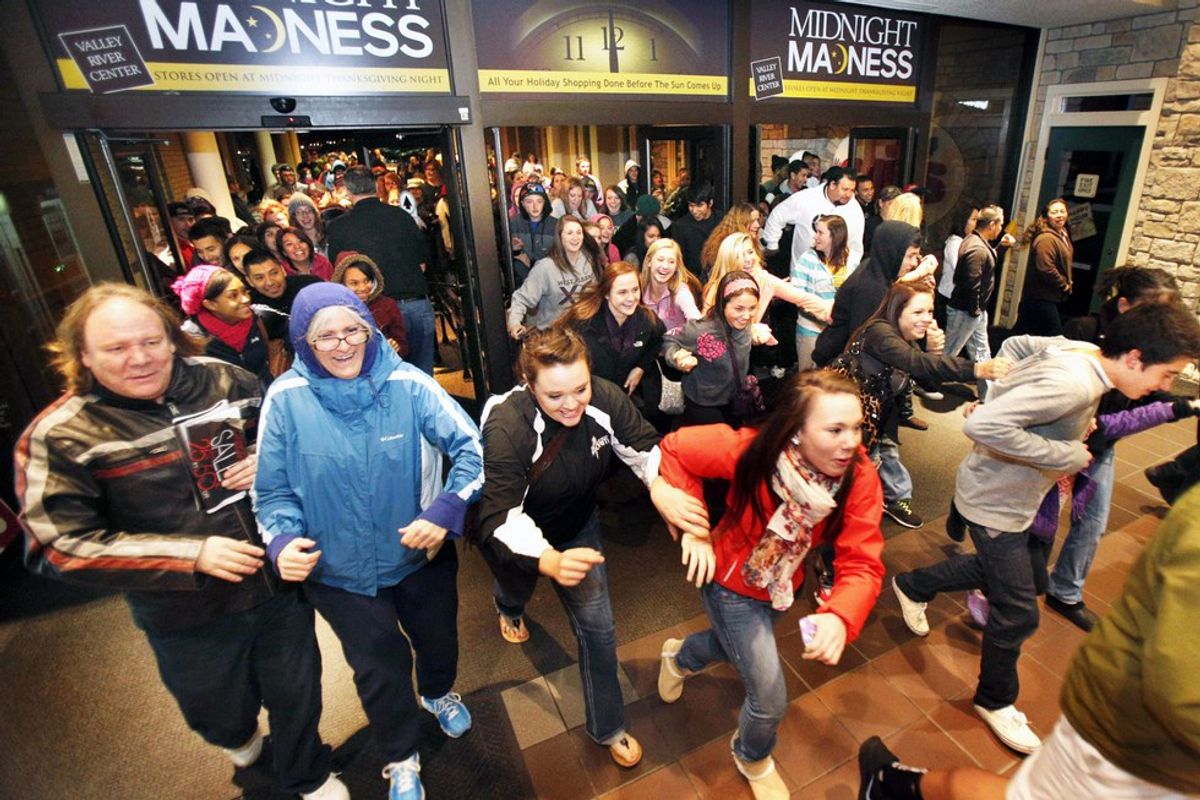 Matt and I decided to celebrate Black Friday, the day when capitalism verges on anarchy, the day when shoppers kill. I wore pajama pants, a John Lennon “Imagine” t-shirt, a Soviet Red Army jacket, and a giant metal knee brace. Matt refused to join the pajamas-in-public revolution, but I stood my ground.

We stopped at Burger King on the way to the mall. We both preferred Wendy’s, but what can you do. “What are your Black Friday deals?” Matt said to the gray drive-thru microphone. A couple seconds delay, and then, “uh… we don’t have any.” Just then I saw their new ‘10 chicken nuggets for $1.49’ advertisement. “Matt,” I said, serious now, “we can get 40 chicken nuggets for six dollars.”

“Yeah but they’re terrible.” He replied, unfazed by this absurd deal that apparently was not relegated to only Black Friday.

“Of course they are, so what? It’s still 40 chicken nuggets for six dollars.” I said, realizing as I said it there was no point in trying to convince him to split 40 bad chicken nuggets with me.

I ended up getting 20 chicken nuggets for $3, and at the last second I remembered to ask for ranch. Nothing like ranch to cover up the blandness of bad to mediocre chicken. Matt said “didn’t you guys have Black Friday deals last year?” and they said they didn’t. “Must’ve been McDonald’s,” I said. We were off to a good start.

Traditionally, after a hearty night of bullying the natives and eating a feast of the ill-begotten food of the land, Americans wake up in the middle of the night to be good, vicious consumers and satisfy the gods in the Walton family. I slept late and Matt was very hungover, so we didn’t make it to the mall until about two in the afternoon.

The stench of Mall, the smell of cleaning chemicals and perfume, the olfactory version of a fluorescent-light-induced headache, overwhelmed the senses and I suddenly remembered, viscerally, that malls are always terrible. We entered through Sears, and there were no scenes of anarchy, there was no chaos to participate in, not even an inkling of a stampede. We missed the action.

When we got into the mall part of the mall, my worst fears were confirmed: this was just a day at the mall. It didn’t look like Black Friday at all. It didn’t look remotely Black, and I couldn’t even tell it was Friday. Only women seemed concerned by my outfit, many staring incredulously.

I needed a new leather jacket and new pads for my shoes, but the atmosphere was so off-putting I couldn’t bring myself to walk into any of the clothing or shoe stores. I had a terrible headache. “We should at least be on acid,” I said to Matt. “At least,” he replied.

We wandered around until we found GameStop so that I could once again not buy a PlayStation 4. Outside of GameStop a police officer walked up to us and handed us a sheet about how to stay safe on Black Friday, including holding your keys in your hand as you walk through a parking lot. “Where are the stampedes?” we asked the cop. “We thought there would be stampedes.”

“There’s nothing crazy going on.”

“Aw man. Were there stampedes earlier?”

Inside GameStop I was suddenly very thirsty. A man asked me about the trip from Russia and then assured me he was joking and then revealed himself to be a plainclothes employee and asked if I needed anything.

“Yeah, do you have any water?”

“No, we sold out. That’s the first thing that goes in GameStop on Black Friday. I’m joking.”

All the best jokes end with the joke teller declaring that it was a joke. A man was giggling. “They should sell water here.”

“No man, water is free,” I told him. “They should serve it here. I would feel much more comfortable perusing videogames if they weren’t sweating me out. I’ll just get it next Black Friday.”

I berated Matt for letting GameStop swindle him in spending $16 on a ratty Pokémon wallet with no price tag but electing not to spend $10 on Ratchet & Clank, a classic videogame which would supply hours of nostalgia-inducing entertainment.

Next we sarcastically walked into Hot Topic. An employee walked up to us and asked us what Nirvana is. Then he started cursing at us, and his co-worker or maybe his boss asked if he was giving us attitude, and he said “they don’t give a shit.” I asked him if he wanted to be in my band, and then I realized that not only was he already in a band but that our bands had played a show together. I fucking hate Long Island.

We ended up in Target, where Matt bought whatever new Harry Potter stageplay bullshit they’re selling, and a Shrek holiday special DVD titled Shrek The Halls that he would later discover is only 22 minutes long.

We exited the mall the only way we knew how, through Sears. Matt asked the guy if they get a lot of people asking if they can put their purchases on the Extreme: Home Makeover account. “I’m sorry, I really don’t know,” he said, depressingly earnestly. “You’ll have to ask a cashier.”