Abandoning the Right Faith for the Wrong Certainty 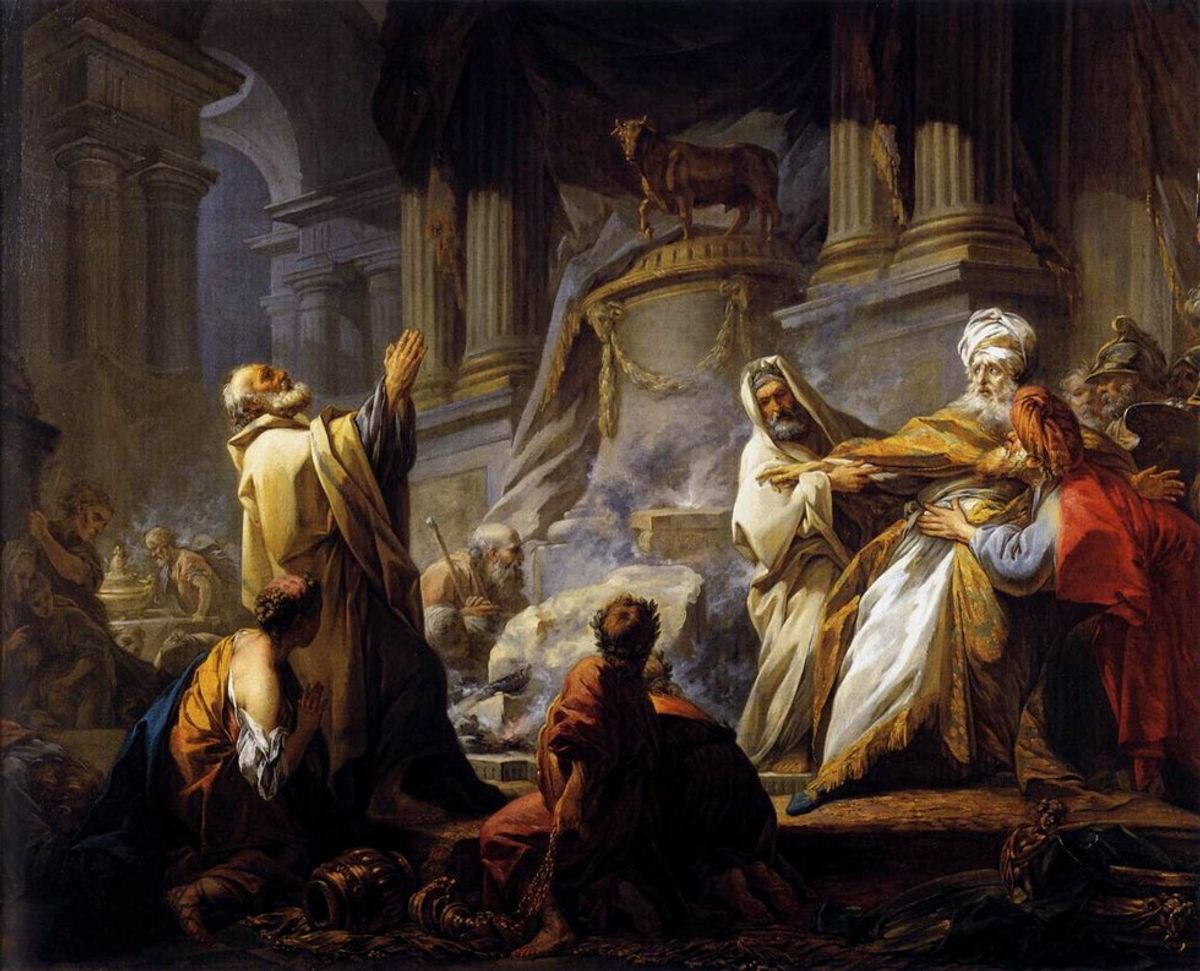 As I was praying to God about what to write about this week, and resorting to the ill-advised yet surprisingly helpful technique of opening a random page of the Bible and reading, I came across the story of Moses as we climbed Mount Sinai and was given the Ten Commandments. I understood the story perfectly; I'd heard it before after all. While Moses was either climbing up or down from Mount Sinai, the Israelites at the bottom became anxious and asked a mysterious man, Aaron, to give them a new god that would go before them. "As for this fellow Moses who brought us out of Egypt, we don't know what has happened to him," they said. Aaron told them to give him the earrings of their wives, sons, and daughters, and with a tool, fashioned a golden calf. Then the Israelites, looking upon this golden idol, declared, "These are your gods, Israel, who brought you up out of Egypt."

The story was clear and yet...I was STUCK. I started to panic; something usually clicked in me about this time when I reach the end of a story, sometimes not even needing to finish before His inspiration spurs my mouth to speak and fingers to type. Surely, the spark would come anytime now...anytime...any...time...NOW. I stared at the pages of God's book and anger swirled in me at the blankness of my mind. What was He trying to say? How exactly was this story supposed to relate to my life? What was I supposed to say about this story if God did indeed want me to expand on it? Finally, I just closed the book and went about my day, occasionally praying for God to give me an update on any progress He'd made on giving me the words for my article. Still no reply. A seldom prayer: "Anytime God," I told Him.

More waiting...waiting...waiting. Another prayer: "You just gonna leave me hanging?" More anger...waiting...anger...more waiting. The last prayer: "Okay, fine. I guess I don't have an article." I watched the clock tick past midnight. It was Saturday, and I in bitter contempt, watched my perfect record of submissions go up in smoke. Then, as I was sitting on the couch the next day, watching "The Golden Girls," the words came to me: My golden calf. It's me! It took me days of contemplation and regrettably a late deadline for me to come to a real-life application, proving just how deeply and significantly this story affects my life and my relationship with God, as I suspect He already knew. How long do we wait for God before we say, "God, you're taking too long. I'm moving on?"

Thinking of "The Golden Calf" in retrospect changed everything. God has just released the Israelites from slavery. He has directed His wrath against the oppressors of His people. He has made rivers run with blood, hurled fire from the heavens, sent biting insects and locusts and wild animals across the land, struck boils and disease. He has ravaged livestock and spread darkness over the land of Egypt. He claimed the firstborn. He shielded them from the angel of death! He has parted the Red Sea, and now, He has promised them a beautiful and fertile land of milk and honey. After having the privilege to witness God's justice and command, to have any skeptical explanation wither in the face of His awesomeness, the Israelites make an idol because Moses is taking too long coming down from a mountain?! It was infuriating...or it had been before the connection came in that unsuspecting moment. Then it was just sad.

I am on a journey of my own; I am coming from my own land of slavery to sin to God's promise land of salvation, and that day, I was forced to wait. Whatever was supposed to happen, I didn't know; I was at the bottom of the mountain with no far view. All I had were the promises God made to me and the troubles and hardships he had gotten me out of to sustain me. I'd learned that in times of doubt, reading the Bible would more often than not give me the answer I needed, and I needed an answer desperately. I also knew the Bible could be a challenging; meditation and reflection go a long way in understanding a scripture. Instant inspiration doesn't always come, but the one time in a while that I came across a piece of doctrine that didn't click, did I pray to God for patience? No. Did I pray to God for understanding? No. Did I pray for guidance in case I'd misunderstood? No. I prayed to God to hurry up, and when He didn't, I turned away.

I was left on my own to uphold my faith and trust in God's deliverance for a few days and I faltered, no better than the Israelites who desired "a god to go before them" than waiting for Moses to descend a mountain. My golden calf isn't made of gold. It's not even a calf. It is a human girl named Ashley, and I turn to her every time I falter in my faith, choosing to trust in her potential failure than God's uncertain success. I have a big day of confession ahead of me, but in light of a well-spent word count, I'll say the most important: Thank you God, and please forgive me.