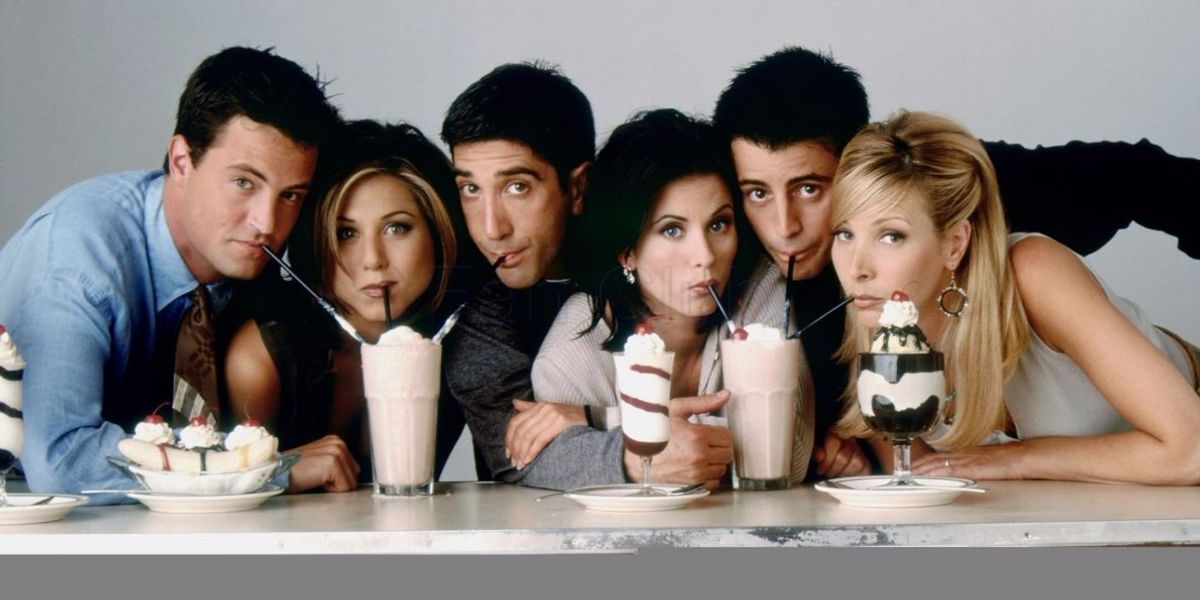 Friends is a tv show that I will always love. I always watched reruns when it was on and fell in love with the characters and humor of the show. One day a few summers ago, my mom came home with a box of each friends season on DVD from a yard sale, and I binge watched the entire 10 seasons throughout the year. I still watch reruns or pick my favorite episodes on Netflix whenever I need a good laugh or something to watch. These are my personal top moments of FRIENDS (in no particular order) - the funniest ones, the cutest ones, and the iconic ones.

1. Ross and his tan that goes really wrong

This is one of the scenes that always cracks me up. My dad and I watched it together once and we were both find it hysterical. Not to mention that we get to hear some of Chandler's classic sarcasm at its finest. S(Season 10, Episode 3, The One With Ross's Tan)

I took French for six years, so Joey's epic fail at speaking the language (despite his confidence) brings back some interesting memories of my class with my friends. And Phoebe's frustration makes it even better. (Season 10, Episode 13, The One Where Joey Speaks French)

First of all, any of the flashbacks to the friend's high school or college years are great. But the episode is especially one of my favorites! (Season 2, Episode 13, The One With The Prom Video)

4. Joey and his game show fail

Everyone loves Joey's cluelessness! (Season 10, Episode 11, The One Where the Stripper Cries)

5. When Rachel, Phoebe and Ross find out about Chandler and Monica's relationship

(Season 5, Episode 13, The One Where Everyone Finds Out)

Ross explains that he used this gesture instead of his middle finger so his parents would not know he was flipping Monica off, which is carried through a lot of the episodes. (Season 4, Episode 5, The One With Joey's New Girl Friend)

7. Ross and Monica showing off their moves

Ross and Monica try to get to the front of the New Year's Rocking Eve show as background dancers with a dance routine they created together in their childhood...sibling goals! (Season 6, Episode 10, The One With the Routine)

Ross's "Jurassic Parka" joke and reenactment makes me laugh every time! This episode overall has a lot of great scenes. (Season 3, Episode 14, The One With Phoebe's Ex-Partner")

Rachel teaches Ben some pranks to put on Ross, but when she goes to explain why he needs to stop, she accidentally teaches Ben some inappropriate language that Ross does not appreciate. Little baby Cole Spouse is so cute! (Season 7, Episode 16, The One with the Truth About London)

The hair. The competition. Love it. (Season 9, Episode 23, The One in Barbados Part One)

Ross can only get Emma to sing with a very interesting song choice. (Season 9, Episode 7, The One With Ross's Inappropriate Song)

Makes my heart melt. (Season 2, Episode 7, The One Where Ross Finds Out)

13. Ross and his keyboard

(Season 4, Episode 7, The One Where Chandler Crosses the Line)

Oh Joey...his love for food is always priority. (Season 8, Episode 9, The One With the Rumor)

When Ross can't seem to talk smooth to his new girl friend, Joey gives him some pointers... and helps role play. Awkward...(Season 1, Episode 16, The One With the Stoned Guy)

Do I need to say anything more? (Season 6, Episode 17, The One With Unagi)

I love this bromance moment between Joey and Chandler (Season 2, Episode 19, The One Where Eddie Won't Go)

Ross explains Hannukah to Ben. And then when he can't find a Santa outfit, he improvises. (Season 7, Episode 10, The One With The Holiday Armadillo)

(Season 6, Episode 9, The One Where Ross Gets High)

20. Chandler professes his love to Monica

There are so many great moments in Friends that it was almost impossible to put together my favorites. Which scenes are your favorite?