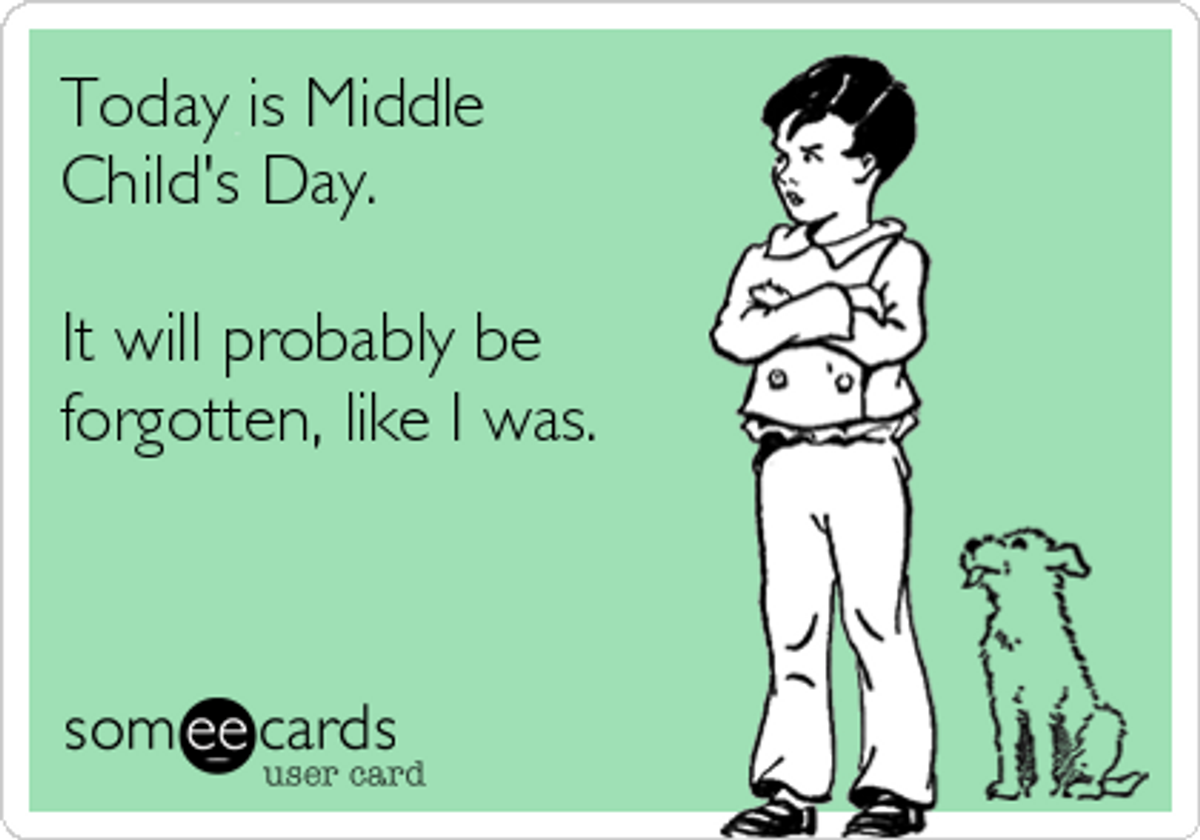 Wikipedia defines middle child syndrome as “the feeling of exclusion by middle children (those with one younger and one older sibling). This effect occurs because the first child is more prone to receive privileges and responsibilities (by virtue of being the oldest), while the youngest in the family is generally considered the 'baby.' The second (or middle child) no longer has their status as the baby and leaves them with no 'clear role' in the family, or a feeling of being 'left out.' Despite being used to explain a child's behavior, middle child syndrome is not actually a 'clinical disorder.'"

I apologize, but for the first time in my life, I am going to have to disagree with Wikipedia. As a middle child, with an older sister and a younger brother, I can promise you that middle child syndrome is very serious and very real. There are many skeptics (older siblings, younger siblings, mothers, fathers, and basically anyone who is not a middle child) who believe that all middle children fabricate this syndrome to look for attention and to receive pity. Though the attention thing might have some truth to it, I have had middle child syndrome since the day my brother was born.

As a middle child, you not only get compared to one sibling, but to both. This one has to be the absolute worst. I like to consider myself pretty accomplished, but I do not think I will ever live up to my older sister, or worse, my younger brother. If I get three A's and two B's, my older sister gets four A's and one B, and my little brother gets all A's. If I get a personal record in track, my siblings get better personal records. If I become president of the United States, no doubt, one or both of them will figure out a way to become president of the universe. My older sister doesn't get compared to my little brother because they are too many years apart, but as the middle child, I get the lucky gig of being compared to both (note sarcasm).

Let's also not forget the fact that while your younger sibling gets to be the cute one and your older sibling gets to be the mature one, you are not given a confident boosting adjective, and are forever deemed "that child." With all of this being said, middle child syndrome can be cured. All we need is a little TLC (and for our little brother to maybe fall down a well).

Emma Hyatt
3473
The Truth About My Parents' Divorce