The Met Gala Reeks Of Unchecked Narcissism And Classicism And, Well, It Sucks 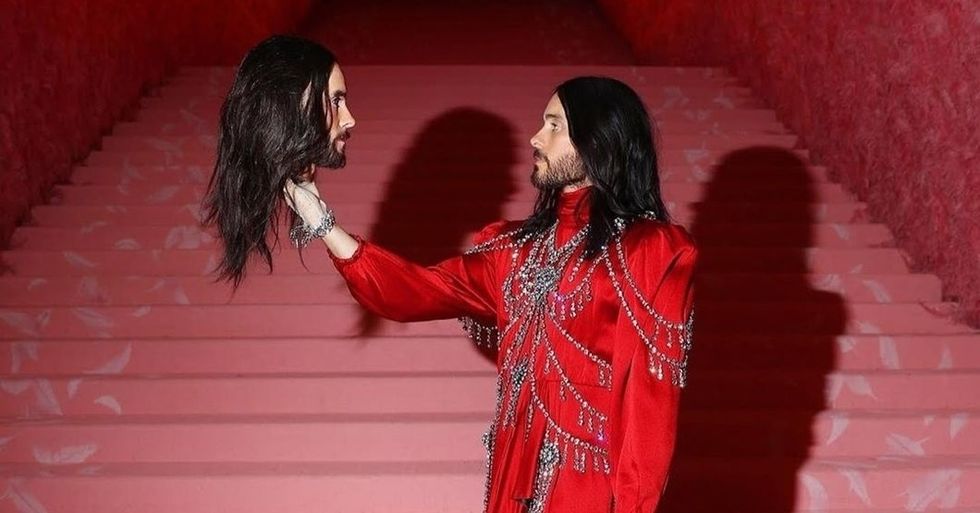 Can we all just be honest with each other for a moment: In order to find the Met Gala appealing you have to lie to yourself. There has to be a level of self-imposed denial; how else could the gross display of income inequality not worry you.

Admittedly, I think the Met Gala is dumb-boring. Why is the goal of a night to look at famous people? It's like the worst part of your Instagram explore feed all in a room. I think that this night speaks to something kind of dark in our culture. We use the luxurious lifestyles of the rich as a form of escapism to an alarming degree. The whole night is a celebrity back-patting machine that props itself up as a fundraiser after the event but it actually perceived by people as something different.

This meme is the second best thing to ever come from the Met Gala. www.youtube.com

There's a lot I dislike about the Gala. The exclusivity of the event is touted as a reason for the event's importance. Sure, of course, anywhere James Charles is indicative of a creative and intellectual hotbed. *sighs*

Inevitably the exclusivity of the event makes it a hot commodity on social media (it's basic social media economics). Which in turn makes the center of attention not the fundraising (the original mission statement of the event dating back to 1948) but how famous someone is before the event, during, and after. There are whole articles dedicated to watching celebrity follower counts post-Gala.

TMZ reports that "the Met Gala raised a record-breaking $15 million for charity." Charity is speaking somewhat loosely. In actuality, the Gala raises funds for the Metropolitan Museum of Art's Costume Institute, and is the primary source of income for the institute.

Every year a bunch of celebrities go to the Met Gala dressed as wind chimes or whatever and we all tweet "INCREDIBL… https://t.co/nL2TwACFsT
— Dan Sheehan (@Dan Sheehan)1557182626.0

While that is a remarkable achievement it's literally a drop in the bucket of the billions of dollars that was in attendance. If these people are such titans of charity they shouldn't have to go to the most exclusive party in town to give money to a cause they (clearly) support. I'm not saying I blame anyone for going I'm simply saying their egos deserve no credit or kudos for attending a party that could be a chapter in The Great Gatsby.

Tables reportedly cost anywhere from 200 to 300 thousand dollars with individual tickets costing 35 thousand, reports the New York Times. Though I'm not entirely sure how exactly the money is raised or who exactly is allowed to buy tickets. That all has to be approved by gatekeeper and Vogue Editor-In-Chief Anna Wintour. I imagine next years Gala hauls in close to 20 million dollars, the theme will be even more extravagant, and the event will get exponentially more engagement online.

In the interest of not being too hypocritical, I will openly say I love the Academy Awards. This proves I can enjoy a rich people prom just like anyone else, but at least the Oscars pretends it's celebrating the art of cinema. At least there's a chance a non-millionaire could win an Oscar. There are reasons other than "hey look at these gorgeous rich people" if you'd like to watch the Oscars. I'm not saying the Academy Awards (or any major award show) doesn't end up being a famous person zoo, I'm saying it' easier to lie to yourself. There is no grand narrative of the Met Gala. It's peak consumption of raw popularity.

Thanks to Twitter and Instagram the Met Gala — excuse me, the Metropolitan Museum of Art Costume Institute benefit — is in effect the Crown Jewel of our tabloid culture. The extravaganza is the culmination of reality TV stardom, the pop music machine, and the new age social influencers, and so much more. I think it speaks to something deep in the American psyche.

Trying to balance work, sleep, and a social life.

There are obviously reasons to appreciate the Met Gala — Billy Porter is almost all of them. For fashion connoisseurs, I imagine it's like what watching the NBA Finals is for me. I imagine the archives the event, and what it said about American society, is something historians will ponder hundreds of years from now. The night is pure spectacle. And there are people who attend the Gala that I respect and admire beyond my own comprehension (like Lizzo, Frank Ocean, Kanye West, Travis Scott, and Janelle Monae to name a few), but I can't lie to myself about this. There is no joy to be found for me, and I won't advocate for others to feel exactly the same as me. Honestly, I'm merely imploring others to at least recognize the Met Gala is like the Grammy's with no trophies. It's just a wealthy illusion. It's the carrot dangled in front of us that maybe one day we'll get the invite to the cool party.