Best Worst Thing That Ever Could Have Happened

Best Worst Thing That Ever Could Have Happened

My experience seeing Lonny Price's new documentary about the making of Merrily We Roll Along. 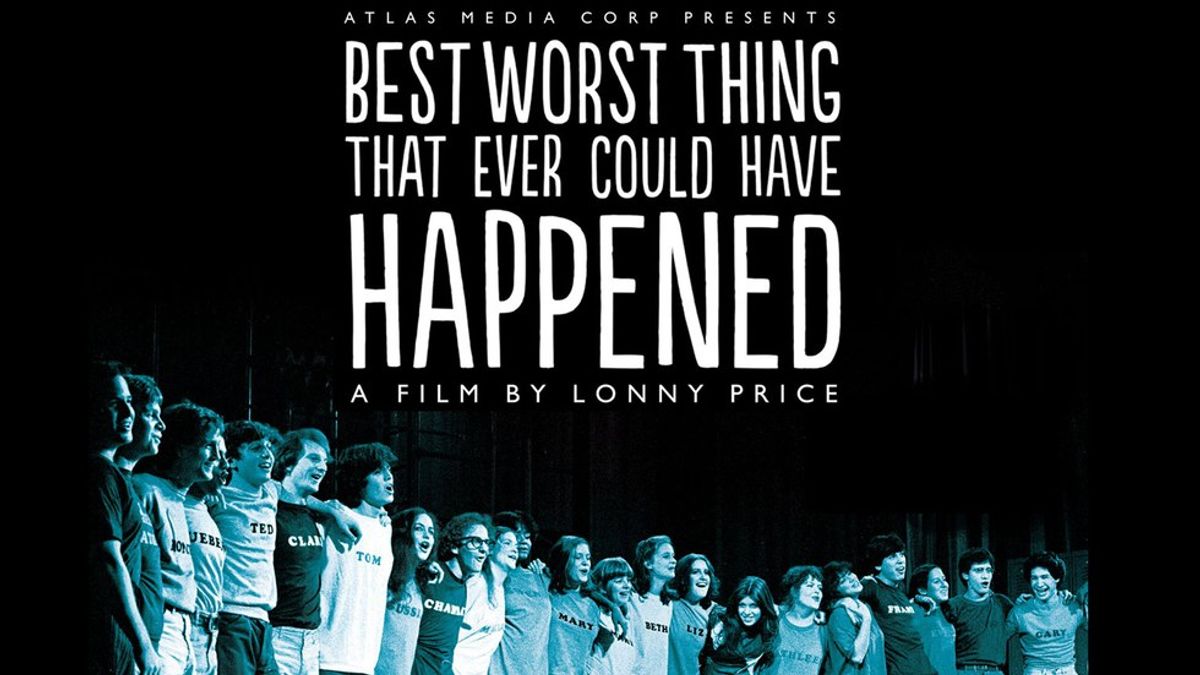 Last week, my friend and I finished class and jumped on a bus just in time to make the screening of "Best Worst Thing That Ever Could Have Happened," a new documentary focusing on the making of Sondheim's musical "Merrily We Roll Along," at IFC Center in New York City.

To provide some background, "Merrily We Roll Along" deals with the lives and artistic careers of three friends (a composer, a lyricist and a writer). It is told in reverse order, starting in 1976 and ending in 1957. The characters age backwards from old, successful and jaded to young and idealistic. Though "Merrily" has since gained popularity in the theatre community, its original production was an enormous flop. That's the story the documentary tells.

In the first moments of "Best Worst Thing That Ever Could Have Happened", director and original cast member Lonny Price uncovers a television interview of himself at the time of the Broadway production of "Merrily We Roll Along," in his early twenties. Grinning, his younger self tells the interviewer that when he was cast, he was so excited that he would wait for the light to turn green before crossing the street because he feared he would die before beginning rehearsals, even on empty streets. The now 57-year-old Price watches his younger self and cries. This juxtaposition perfectly sums up a dominant theme of "Merrily We Roll Along" as well as "Best Worst Thing" itself: facing reality and the death of one's youthful dreams.

First, the movie details the making process of Merrily We Roll Along, documenting the feverish excitement of all involved: Stephen Sondheim and Hal Prince, the composer and producer, and especially the young, unknown cast members, whose interviews put everything in context. The hectic open audition process, major changes made to the show during rehearsals and previews, and the last-minute replacement of the lead are all covered in its first section. Despite these setbacks, cast members had remained optimistic about the show's reception.

They shouldn't have. "Merrily We Roll Along" closed after just 16 performances. All the young cast members were crushed, and though many continued working in film and theater, their disappointment has influenced them to this day. In the second half of the movie, we catch up with all these cast members and learn about what their lives became. Then, finally, they reunite at the theater where they performed together all those years ago.

Interspersed throughout are snippets of music from "Merrily We Roll Along," some almost diegetic and others simply serving as underscoring. Indeed, there are quite a few parallels between the two pieces. A major theme in both "Best Worst Thing That Ever Could Have Happened" and "Merrily We Roll Along" itself is youth, particularly the hope that goes along with it and is destroyed in adulthood. I suppose one could draw depressing conclusions from the film, but I didn't. In the words of Stephen Sondheim in "Merrily We Roll Along," "time goes by and dreams go dry but you can't give up on your dreams." I just turned twenty myself, and I'm savoring the feeling that my whole life is in front of me (knock on wood). "Best Worst Thing That Ever Could Have Happened" provided me with a wake-up call, the realization that my million and a half career possibilities won't always be possibilities. I'm now much more determined to enjoy being young. The timelines of "Merrily" and "Best Worst Thing" are also interesting to note. Both are told in context of the present, but "Best Worst Thing" follows a typical documentary format, telling the story from beginning to end while those watching are aware of the ending because of the interspersed insights of original cast members. "Merrily We Roll Along," on the other hand, infamously goes backwards. Nevertheless, they are similar in that neither story structure is a simple arc.

I'd highly recommend this documentary to anyone, but particularly to artists. It's poignant, funny, simultaneously heartwarming and heartbreaking. As BK Mag pointed out, it's "a documentary about a failed musical about failure." But with that failure comes not only valuable lessons, but irreplaceable memories. If you ask me, that's the meaning behind the title. A failure, a flop, or a heartbreak doesn't erase or negate the fun you had on the journey. "Best Worst Thing"'s message, in the end, is actually quite uplifting.

And what plays during the end credits? Naturally, the overture of "Merrily We Roll Along."