Similarities and differences in "Thor" 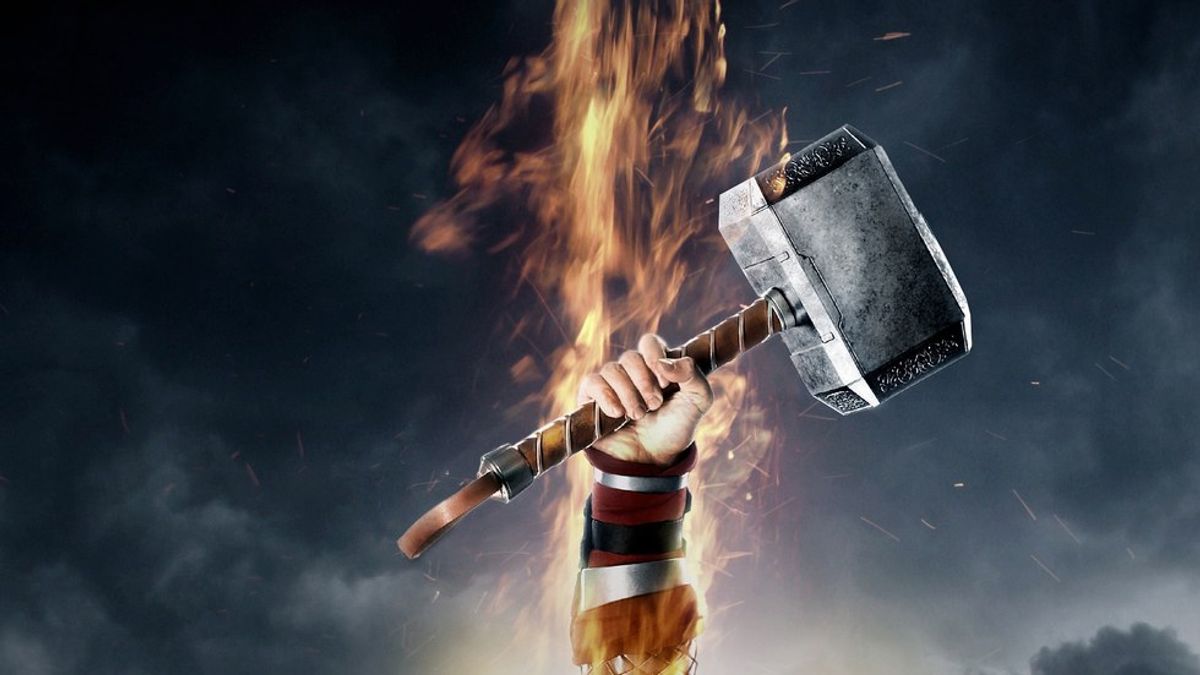 I'm a big fan of the Marvel Cinematic Universe. As in, I'm at every movie on opening day, oft times in costume. I rewatch the older movies before a new one comes out. I binge watch through their shows as soon as they hit Netflix (ohmydearsweetgoodness, Daredevil!!).

I'm also a huge mythology nerd, particularly Norse mythology. Because of this, I was quite interested (and at times amused) to see the differences and similarities between Marvel's Thor and his mythological counterpart. Here are a few of the ones which particularly struck me:

Thor himself is pretty similar in both Marvel and Norse mythology. He's hot tempered, at times arrogant, but a generally good guy who wants to protect his home. The biggest differences? In the myths, Thor is a redhead...and he's not the brightest lightning bolt in the sky. Marvel's Thor is considerably more intelligent than his mythical origin, probably much to the Avengers' relief.

Mjolnir, the hammer of Thor – or Mew-mew, if it's easier for you to pronounce. In both the myths and the movies it allows Thor to command the lightning and the storm. However, the mythical version doesn't let Thor fly if he twirls it super fast. It's also so heavy that no one can lift it on their own strength – no matter how worthy they might be. Thor himself needs a magical set of bracers and a belt, which multiply his strength and allow him to wield Mjolnir. That thing is heavy!

The biggest difference between the movies and the myths lies in the character of Loki. In both he is a trickster. There's a line in Thor of which I am particularly fond, in which one of Thor's friends refers to Loki's silver tongue, for which he is often credited in the myths.

However...Loki is not the brother of Thor.

In Norse mythology, Loki isn't technically related to anyone on the pantheon. He eventually swears a blood oath with Odin, king of the gods, effectively becoming a blood brother of the deity. He has no relation with Thor, and the two are in fact often at one another's throats. In contrast, the Marvel movies have Thor and Loki as brothers, and Loki is the adopted son of Odin. It's the biggest variation from its source material that Marvel takes, and it never fails to make me snicker.

Let me begin by saying that I am a huge fan of Idris Elba. I think that he is a phenomenal actor (and I SO want him to play James Bond!). That having been said, I find it quite amusing that they picked him to play Heimdall. In the myths, the Watcher is described as being white. Now, before anyone gets their knickers in a knot and shouts "Racist!", allow me to clarify. When I say white, I mean white. Whiter than marshmallows, whiter than pearls. There is no actor white enough to play a mythologically accurate Heimdall without serious special effects. I mean, in the myths Heimdall has teeth made of solid gold. They shine when he smiles. I kid you not. Marvel's take on Heimdall is missing the golden smile, but replaces it with gleaming, gold eyes.

Despite this difference, Marvel's Heimdall is brilliantly portrayed as a watcher and a defender of Asgard. Well played, Marvel.

Ah, Sif. She's a fantastic, kick-butt warrior and friend to Thor in the movies. In the myths...not so much.

Mythological Sif is the wife of Thor. She's the goddess of grain and the harvest, and she's a pretty passive figure – definitely not a fighter. One of my favorite myths actually involves Loki shaving her head, and Thor then forcing him to replace it with a wig woven of pure gold. Even though she's central to the story, Sif sits on the sidelines through most of it as the men bicker.

I much prefer Marvel's take on the character.

Most people probably aren't familiar with this name. It should tell you just how big of a mythology nerd I am – I know the name of Odin's horse.

Sleipnir is seen only briefly in the first Thor movie, but I squee'd with glee when he arrived on-screen. This is because, in the myths, Sleipnir is an 8-legged horse. Marvel payed attention to this, and the horse Odin is riding when he shows up to save Thor's group from the frost giants has 8 legs. No attention is drawn to the fact (I didn't notice until my second watch-through), but oh my goodness, I love this attention to detail.

Of course, Sleipnir's parentage is likely (hopefully) different in the Marvel universe than it is in the Norse myths, where his mother was Loki, shapeshifted into a mare to try and get out of some trouble. Seriously. Don't ask.

I'll continue to geek out over random animals from Norse mythology by telling you about the ravens. In the Norse myths Odin has two birds who fly all over the world every day. They are his eyes, collecting information for the king of the gods and bringing it back to him.

In the first Avengers, in the scene where Thor has just abducted Loki from the S.H.I.E.L.D. ship, the two stand on a rock face and talk. As the camera pans back two ravens fly in front of it, cawing.

Once again, Marvel made my day.

King of the gods, and father of Thor (and, in Marvel's universe, Loki). Odin is pretty similar in both his Marvel and his mythological personas. The biggest difference I spotted was his eye injury. Sir Anthony Hopkins rocks the golden eyepatch, and a flashback in the first Thor shows that he lost the eye in a fight with the frost giants. In contrast, in the myths Odin sacrifices his own eye to gain magical knowledge. Either way - yarrr, matey. Eyepatches be not just for pirates!

There's a lot more similarities and differences. The Bifrost really is a rainbow bridge in the myths. While I don't recall ever reading about a Bilgesnipe, which Thor describes to Coulson in the first Avengers, there could be a mythological equivalent. Most interestingly to me is the title of the upcoming Thor movie: Ragnarok. In the myths Ragnarok translates to "doom of the gods". It is an event which has long been foretold, and which ends with most of the deities dead. Given that, I am very curious to see what Marvel does with the movie.

If you're interested in Norse mythology, I highly recommend looking into it further! The stories are gorgeous, and it makes watching the Marvel movies a lot more enjoyable (at least to me). I've got a series of posts about it on my blog; there's also a book called "Gods and Heroes from Viking Mythology" which serves as a great introduction.

Emmaline B
The Narrative
93096
https://unsplash.com/photos/O0T1SIgHAfM