Living with the Dead

Living with the Dead

On an afternoon in Père Lachaise cemetery. 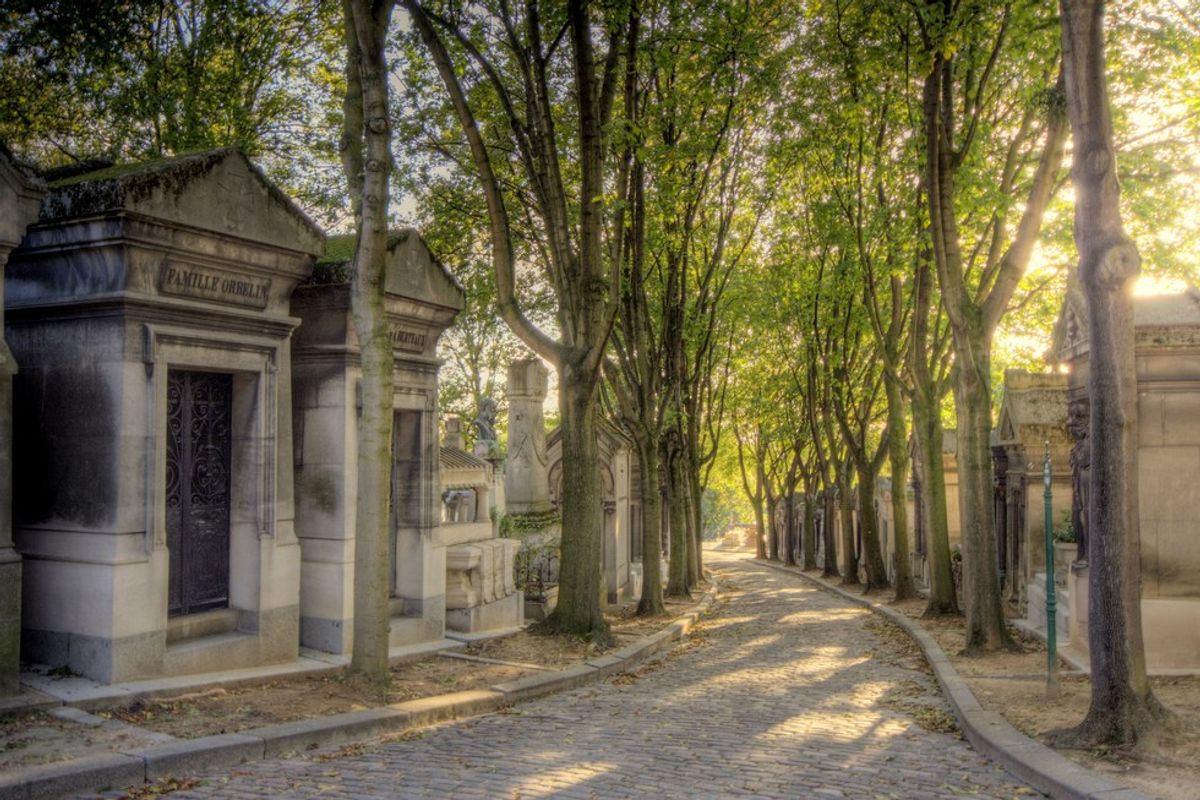 "Well, it looks like this isn't going to happen today," I grumbled behind the stiff color of my winter coat.

The line for admission into the catacombs of Paris snaked nearly a block long around a fenced-in park. For fifteen minutes, my dad and I patiently waited, exchanging empty conversation and watching our frozen breath fade into the gray sky above us. With no forward progress in sight, we bailed. The bones beneath our feet would have to wait for another day.

"You know," I said as we walked to a train station across the street, "we could keep this theme going and visit Père Lachaise cemetery if you wanted."

"Wouldn't you want to go when it's a little nicer out?" he asked.

"Are you kidding? This is the best weather to visit a cemetery. Perfectly dreary!"

He shrugged his shoulders and withdrew his phone from the pocket of his black wool coat.

One agonizingly slow train ride later, we stepped into a café outside the cemetery walls for a late lunch. The entire meal was laughably cliché; cheap glasses of vin blanc du maison, an elderly plump waiter who delighted in regaling us with the few English words in his possession, and rain quietly falling outside. We spoke of the dead, most of them writers and artists, we wished to visit between bites of chèvre en croûte and tarte au fromage.

After the last drops of sugary espresso were downed and the check was paid, we passed through Père Lachaise's iron gates in search of our first target; the grave of French poet Guillaume Apollinaire.

I eventually discovered that what remained of one of my favorite poets was his name carved into a rough stone pillar and a final poem on a slab at our feet. Several bouquets of dying flowers served as vestiges of previous tributes.

"Let's keep moving," I said after several minutes of contemplation.

Somewhere between stops on our bizarre pilgrimage, the reality of our curiosity snuck up on us.

"Life is weird," my dad said suddenly as we emerged from a forest of gravestones and mausoleums onto one of the cemetery's main thoroughfares.

"Calm down there, philosopher," I said with a laugh.

"Well, it's true," he retorted, "We spend all this time building monuments to those we've lost, but what happens when that last person who cares about them dies? All of this is for naught."

For every well-tended tomb were several others choked with moss, riddled with cracks, and adorned with text too faded to read. Even the thousands of visible names we passed meant little to me. How could I know them by only the stony monuments that remained?

I wondered if my acknowledgement, a single glance, a fleeting thought, was enough.

After we completed our list, my dad and I trudged in the direction of the nearest gate, eager to return to the city of the living. A particularly over-decorated grave caught my eye on our way out. She had been young.

"She was a victim of the 2015 terrorist attacks," he explained.

I looked at the dates. We were the same age.

"That's terrible," I said, and started to walk away until I noticed that my dad still lingered.