Alicia Garza, the co-founder of Black Lives Matter, spoke at the University of Richmond last week. 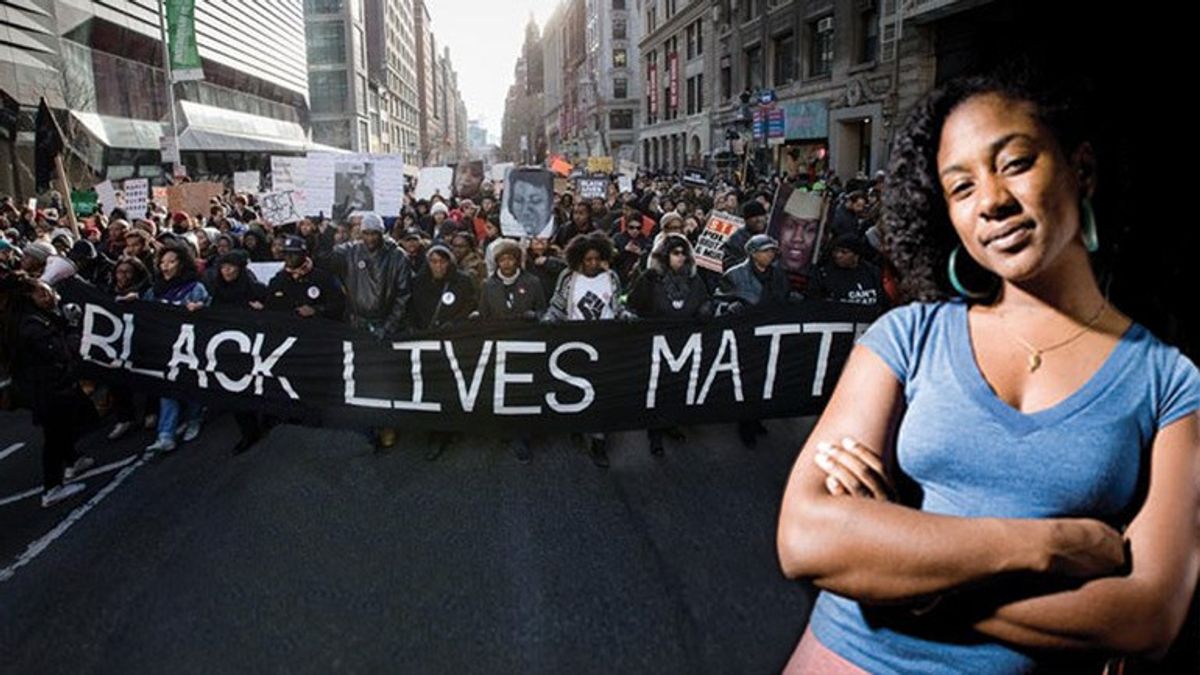 Alicia Garza, co-founder of the Black Lives Matter movement, spoke on Tuesday at the University of Richmond. I was very interested to hear what she would say because of the climate of this campus. A few weeks ago, the opinion article, "#DearWhitePeople stop hiding your racial indifference," was published on The Collegian, and I feel as though it accurately portrays some of the racial inequalities on campus. It's an interesting look into how an an anonymous app allows for students to talk about their thoughts surrounding similar issues about this movement.

Because let's be real: a lot of people on this campus have never been in this sort of situation of living in fear for their lives simply because of the color of their skin. This isn't to say that people on campus haven't faced oppression or that they don't understand the issue (though I do think that's a prevalent issue), but they've never faced the circumstances Garza was talking about. And I'll be honest, neither have I. I face white privilege every day, but I'm trying to understand it more clearly on a societal level. But based on some of the interactions I've had at Richmond, I think it can be said that there are many who don't even try to understand the privilege they have and are quick to make assumptions about movements protecting basic human rights.

I was interested as to what Garza would say because of the environment she was entering. Would she acknowledge that she was at a school stereotyped as 'rich white kids'? Would students who were required to go to the event protest and argue, similarly to how they did when we had a peaceful protest on campus in the fall regarding the Black Lives Matter movement? Would Garza talk about her personal experience or try to push the movement onto those who weren't already a part of it?

I came in as an advocate for the Black Lives Matter movement and left even more a fan. Garza held herself as soft-spoken, passionate, but not loud, not preachy, and the ultimate message she promoted was one of love. How could you argue with love?

Her words expressed a sense of peace and love for all and acknowledged the classic arguments she had heard through her time as a part of this movement.

She spoke about how hashtags don't start movements, people do.

"There's no way I could've started this by myself. You know why? Because black people have been struggling since 1619," she said.

She said the project began as a "love letter" to black people. A simple recognition that an adult had killed a child and got away with it. She spoke calmly and simply.

"The project was a way to say 'Black folks, we're good.'

"We're not problems to be fixed or eliminated.

"It doesn't matter if you sag your pants or wear them around your waist, you are still worthy," she said.

"Of life. Of deserving to live and not live in fear of being killed based on the color of your skin.

"Somehow we've gotten to a place where we shoot first and ask questions later," she said in reference to that we search for reasons why Trayvon Martin died instead of why a man killed him for no apparent reason and faced no penalties.

I sat in the audience, smiling not because any of this was good. It was sad beyond belief, but I hoped that something would hit a nerve with those in the audience that came in skeptical of the movement and wanting to doubt her. I smiled because hopefully, this would be the first step in an open dialogue at the University of Richmond.

Because so often, the space for an open dialogue is what's needed, which was actually the purpose for the origins of Black Lives Matter.

"All lives do, in fact, matter," Garza said, "We fight like hell to make sure they matter in practice.

"We just spoke from our hearts. From our experiences with black death.

"We wanted to create space to tell our own stories on our own terms.

"You can't tweet your way to power-- it's a consolidation of individual efforts where we grappled with our real contradictions as people."

The acknowledgment that the redundant argument "all lives matter" was powerful and real. It was applicable to our campus.

"Right now, some lives matter more than others," Garza said.

While some feel that the movement is accusatory, Garza emphasized that "White supremacy isn't to be inflammatory. It is to name the disease that is killing every single one of us, just in different ways."

I sat in amazement at her eloquence as she spoke about love for all. She spoke about the need for equal pay not just for women, who make 78 cents on the dollar to men, but for black women who make 64 cents. And Latinos make 58 cents, and it's even fewer for indigenous women or trans women. Arguments that surround the Black Lives Matter movement consist of illogical thoughts that it's only for black people or that it's full of violence or that it's putting the lives of black people ahead of others.

To which I'd like to reiterate Garza's words, "We are not separating people. ... Not a movement for black people, it's for all of us to get right."

Black Lives Matter is about love and equality for all. It's about acknowledging that white privilege exists and that black people face problems none of us will ever be able to understand on a personal level, but fighting to make sure we're not a part of the problem, but contributing to the awareness of this privilege and to the solution. It's about stepping outside of your comfort zone and understanding the societal system that exists in our favor. It's about not feeling as though you're being accused, but that you're a part of something that was taught to you since you were young and changing from it. It's understanding that we are part of a disease that favors white people and working to change it.

We are all ignorant to some of these issues, but instead of arguing against our ignorance, let's try to solve some of the ignorance.

It's about working to be a part of this "love letter."