Why Hamilton's Lin-Manuel Miranda Is My Hero
Odyssey
CurrentlySwoonLifestyleHealth & WellnessStudent LifeContent InspirationEntertainmentPolitics and ActivismSportsAdulting
About usAdvertiseTermsPrivacyDMCAContact us
® 2023 ODYSSEY
Welcome back
Sign in to comment to your favorite stories, participate in your community and interact with your friends
or
LOG IN WITH FACEBOOK
No account? Create one
Start writing a post
Entertainment

Why Hamilton's Lin-Manuel Miranda Is My Hero

From theater to reality. 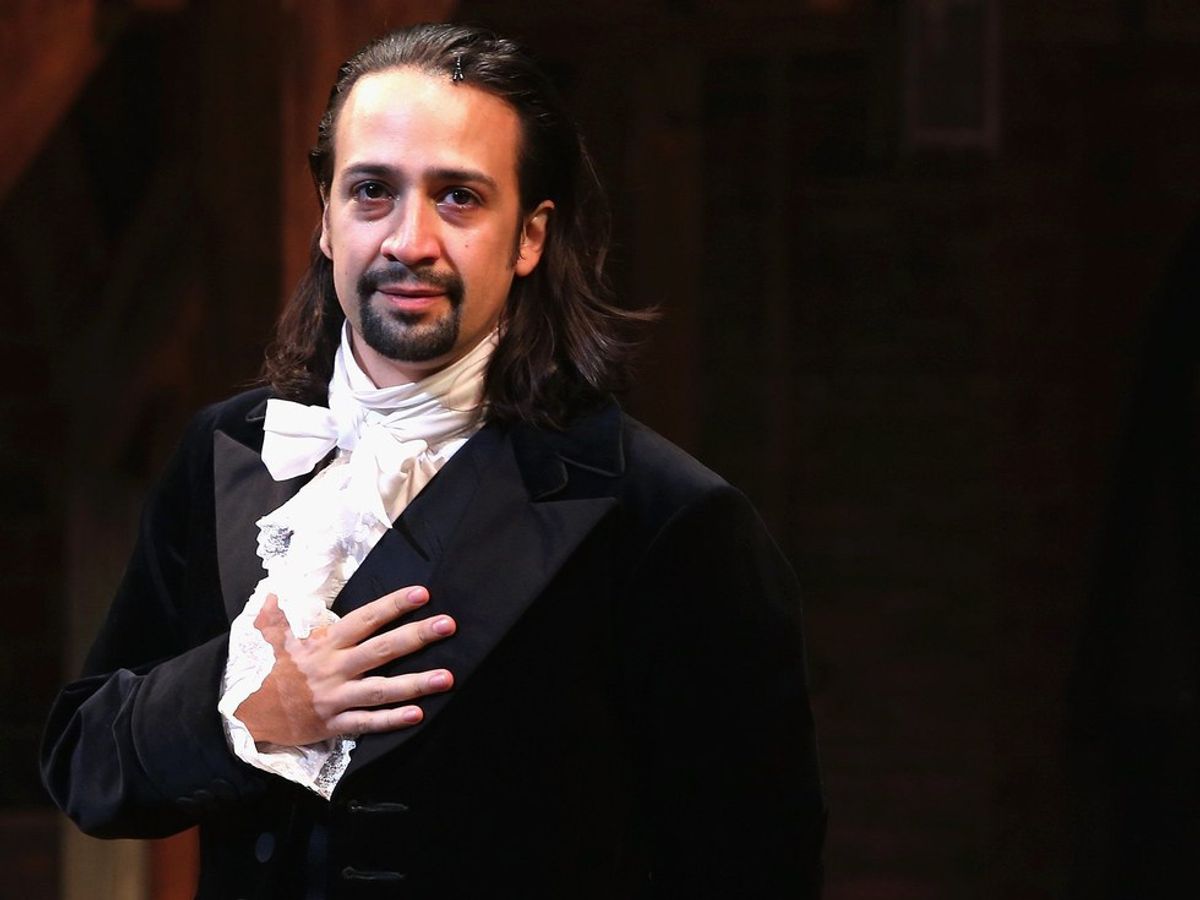 All the buzz about "Hamilton the Musical" has the world's eyes on Lin-Manuel Miranda, the mastermind who decided to write a musical while on vacation, reading Ron Chernow's biography of Alexander Hamilton. Hamilton inspired him, and now Hamilton is inspiring all of us.

But before "Hamilton" hit Broadway, Lin-Manuel Miranda was already making his mark in the world, advocating for the things he cares about, and performing for audiences of theater-lovers. He is one of my heroes because of his dedication to the arts, advocacy for justice in theater and in the world, and his literary brilliance.

Lin-Manuel talks about his first theater performance, when he was 12 and playing Conrad Birdie in his school production of "Bye Bye Birdie". That is what started it all-and he continued to do theater, and write music. Out of college, he was an English teacher, then went back to theater for good. He has even helped the Rockefeller Foundation bring kids from lots of different schools to the theater to see a musical. Along his journey, he realized that his dream musical didn't quite exist. As a Latino, the huge roles that he wanted to play were not suited towards his voice or dancing abilities. That's one of the reasons he decided to write his own roles. That's when "In the Heights" was born.

I was first introduced to "In the Heights" senior year of high school when it was chosen as my marching band show. A selection of music from the show was arranged for a band; the music was so much fun. While working on the show, I listened to the full soundtrack and immersed myself in the show. It's so much fun; the show is based on the Washington Heights of New York City, where store owner Usnavi, originally played by Lin-Manuel, talks about the Dominican Republic and his hopes of going home. It's full of Latin music that makes you want to get up and dance, rap that morphed into something that perfectly fits into theater, and a combination of Spanish and English that shows off the culture of Latino neighborhoods. He talked about "In the Heights" being a musical for the Latino/Latina community that didn't force them to play gang members or mobs; instead of drugs and crime, the story is filled with inspirational stories about people just trying to make their way and follow their dreams. Lin-Manuel is one of my heroes because he goes after what he wants, and believes in himself. When there wasn't a role in a musical that fit his voice and style perfectly, he made one.

What was born next is what everyone seems to be talking about. On a vacation, reading a biography about an Immigrant taking a collection to go America and rise up in stature, Lin-Manuel had a thought: "this sounds like a hip-hop story." Thus, "Hamilton" was born. It's nearly impossible to get tickets today. Every song and every lyric feels so well thought out and precise. "Hamilton" has not only made history, but it has made history come alive. A story about a Founding Father is no longer centuries behind us; it is made to fit into today's world. The hip-hop style of a lot of the music makes it contemporary. Lin-Manuel's idea is genius. I find myself saying "This is my favorite song!" every time the song changes while I'm listening to the soundtrack. It's hard to pick a favorite song because each one is so well done. The soundtrack has been stuck in my head for weeks, and I still tear up at several points in the musical. Theater done this well makes you feel something when you listen to it; I can't wait until I get a chance to see it myself. Lin-Manuel knows that theater has this power to connect with an audience and make them think; this is why the show ends with "Who Lives, Who Dies, Who Tells Your Story." Every time I finish the soundtrack, I'm left thinking about my own story and legacy.

Aside from how well-done the musical is, "Hamilton" has made a statement about casting and equality that has made an impact on directors in the film and theater industries. While the Founding Fathers, and most of the historical figures in the musical were white, the cast is extremely diverse and has leads like Alexander Hamilton and George Washington played by African American and Latino people. Lin-Manuel has even been quoted to say he would love to see a woman play Hamilton someday. The diversity in his cast reflects the diversity in America today, and shows that a successful show (or movie, for that matter) doesn't have to have a white lead to take off. Hamilton stole the show at the Tony awards, and is probably going to be playing for sold out shows for years. Throughout all of this success and publicity, Lin-Manuel remains humble and grateful. When he talks about the show, he praises the people he works with and becomes humbled by the praises he receives. He is an example of how one should react when they meet fame; his attitude is admirable.

By now, I've watched several interviews of Lin-Manuel, and the way he talks about what he believes in never ceases to amaze me. He is so humble and down-to-earth. He speaks about causes that he cares about, and does what he can to help other people further their causes. He sat down with the Rockefeller Foundation, when they gave a great to New York City schools to go see "Hamilton". He sat down with Emma Watson in her He for She campaign week to talk about the importance of arts as well as women's roles in history. He said something about how men's lives were recorded more often in history, so a lot of what we know about women in our history aren't confirmed, especially as early as the Revolutionary War. When writing Eliza and Angelica's parts in the musical, Lin-Manuel has to do a lot of research and make decisions only based on letters that they wrote. I haven't had the pleasure of meeting Lin-Manuel, but from what I've gathered from his interviews and twitter posts, he's the kind of person that I look up to; I only hope that I may be as passionate and humble in my own career.

In one particular interview, Lin-Manuel was asked to list the top five days of his life. While struggling to make a list, he said, "Every day has the potential to be the best day of your life." That kind of optimistic attitude is another reason why I admire him. When talking about writing some of the music for the show, he told the story of how "That Would Be Enough" from "Hamilton" came out of nowhere, and turned into a love song to his wife. He talked about how excited he is to be co-writing songs for Disney's next princess, "Moana". The most humbling thing he talked about was the spotlight and megaphone you get when you become famous. He acknowledges that he has the ability to speak out about things that all of his fans will read. The power of that amazes him and makes him think about how he can best use that megaphone he has been handed. His thoughtfulness is yet another reason why I look up to Lin-Manuel Miranda.

After the Pulse Shooting in Orlando, Lin-Manuel wrote a sonnet to read when accepting his Tony Award, about love and acceptance. Out of his desire to help, he teamed up with Jennifer Lopez to write "Love Make the World Go Round," and proceeds are going to the Somos Orlando Fund. In his rap, Lin-Manuel said:

"What we got is love even when the sinners hate us; We can not let 'em diminish or intimidate us; We sing out, we got the rhythm and the truth on our side; We cut through the divide and we do it with pride."

He speaks up against hate, and preaches love. He has spoken out about the Puerto Rican Debt Crisis, and the Black Lives Matter movement. Instead of overusing his megaphone, Lin-Manuel has chosen to talk about the causes he cares about most when he can make a difference. Awareness and advocacy have gone hand-in-hand with his career in theater. Lin-Manuel Miranda is my hero because he is so passionate about what he does, what he believes in, and what he wants in his life. I am humbled by his talent and kindness. Lin-Manuel Miranda is my hero, para siempre.