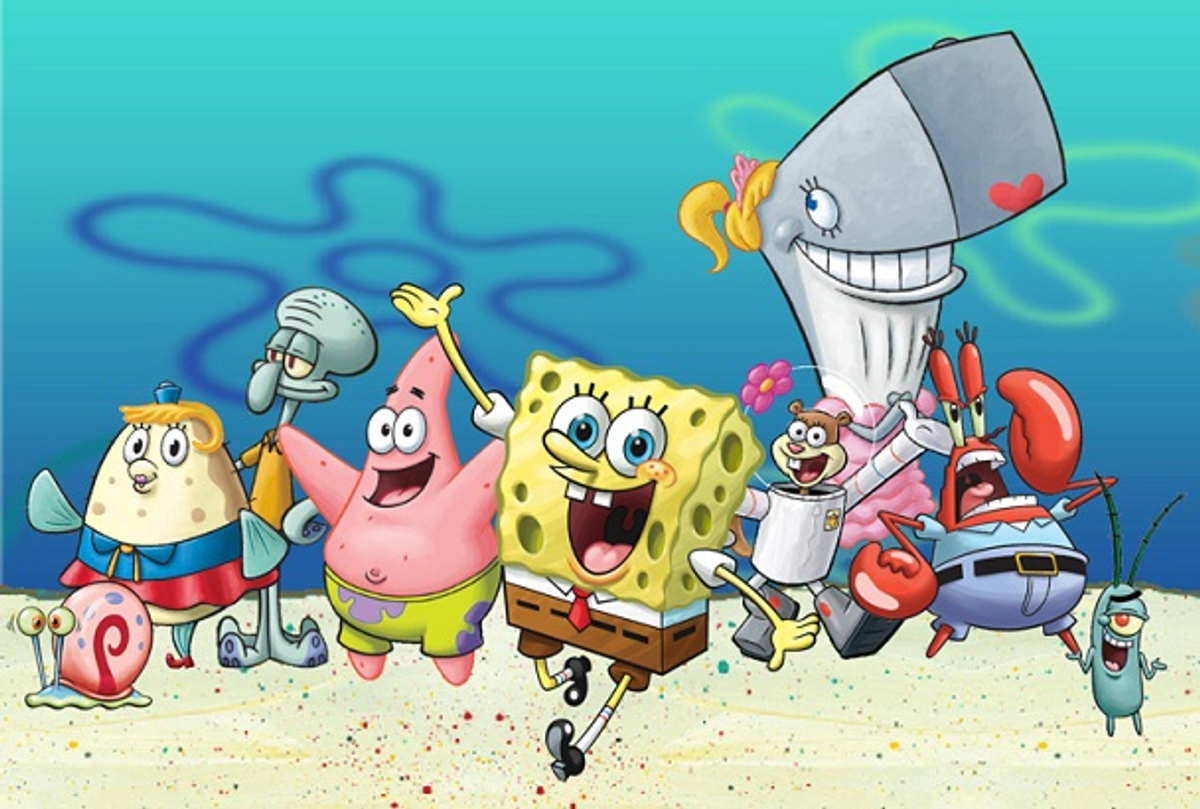 Nineties kids know it best. We grew up on "Drake and Josh," "The FairlyOdd Parents," and "SpongeBob SquarePants." And many of us still find ourselves watching these shows today. When we watch them today, we see all of the things we didn't see back when we were kids. We see another side of the humor, the more adult innuendos and even some of the best lessons about life. Don't believe me? Just see for yourself.

SpongeBob: Squidward, we don't need television. Not as long as we have our—(makes a rainbow with his hands)—imagination.

Squidward: Wow, I never thought of it that way. That's really something. Can I have your TV?


SpongeBob: With—(makes a rainbow with his hands)—imagination, I can be anything I want! A pirate! Argh! A football player! Hutt!

2. Believe in mind over matter (even if it fails us sometimes).

3. Optimism is key, even when facing brick walls.

SpongeBob: Yeah, this is great, just the three of us. You, me, ...and this brick wall that you built between us.

SpongeBob: We have facial hair

Patrick: I changed my underwear

5. But don't get too caught up in growing up that you forget to enjoy being a kid.

SpongeBob: Soo long... [closes the door but then opens it with sad eyes. His sideburns fall off of his head. He starts throwing a big tantrum] I DON'T WANNA GROW UP! I WANT COOKIES! AND "MILKIE"! I WANT A SWEATER WITH LOVE IN THE STITCHES! I WANNA WEAR "DIADIES"! I WANNA RIDE IN MY WAGON! I WANNA CUDDLE-WUDDLE WITH MISTER STUFFYKINS!

Unless you want to end up like SpongeBob, ripping his pants at Goo Lagoon, you might want to check the tag just to make sure you're buying the right size.

7. Understand that not everyone has the same interests as you.

Pearl: [Pearl is in the ordering window to hand SpongeBob an order] SpongeBob, order up!

SpongeBob: Two... sa-lads. Never heard of it. I got to stay hip. I don't want to end up like silly old Squidward. But what in the name of Davy Jones' locker is a sa-lad?

8. You should never make fun of someone for their fears.

Some people's fears don't make sense to everyone else, but that doesn't mean that they're not real.

Bubble Bass: ...Still no pickles! [SpongeBob notices] See? [sticks out his tongue with all the chewed up food on it. Everyone is getting sick at the sight of it and are disgusted] You failed again, SpongeBob "Loser"Pants!

Mr. Krabs: And there's the pickles from last time, too!

10. Don't take advantage of those that care about you.

Just because they're willing to give you the world, doesn't mean that you should demand it.

11. Don't jump to conclusions, situations aren't always as they seem.

Patrick: I'm sorry, SpongeBob. But Gary's with me now. You had your chance and you failed. You have to stop living in the past. Face it SpongeBob, you're only hurting yourself. [he takes off his shorts and puts them in the machine; Gary crawls in after them] It's what Gary wants, and what Gary wants is me! Right, Gary? [the two notice Gary is in the machine, nudging in Patrick's shorts] He only liked me for my shorts!

SpongeBob: No, Patrick. He wanted the cookie in your pocket!

Doodling is great and an amazing stress reliever. Just make sure that you're still paying attention to the world around you or you may look up and see your own DoodleBob wreaking havoc.

13. Everything is good in moderation.

Whether it's relaxation or a little bit of junk food, moderation never really hurt anyone. But the key to moderation is balance, something Squidward clearly didn't understand.

14. Sometimes we have to let go of the things we love most

Even SpongeBob had to learn this lesson when it came to saying goodbye to Mystery.

Mr. Krabs: ♪If I could talk to money, how great my life would be. We'd tell each other secrets, all their friends would visit me. I'd bathe in filthy riches, which is clean enough for me. Oh, if you could tell me what you want, how happy we would be. We'd surely be the best of friends, we'd never disagree. There wouldn't be a downside, not one that I could see. If I could talk to money, come along, sing with me.♪

15. Public nudity is generally frowned upon.

For every weakness someone has, they have countless strengths to match it. The Golden Rule: Treat others the way you want to be treated.

17. It's always the thought that counts.

It doesn't have to be anything fancy, as long as love is put into it, it's one of the best things anyone could ask for... even if it is just a box.

Come on, we've all considered making this a thing once or twice.

19. Don't blame people for what they can't control.

SpongeBob did not give Patrick "the ugly" and frankly, things happen. Don't get angry or blame people for something that's out of their hands.

20. You should always have something to believe in—even if it is the magic conch.

Squidward: You've got to be kidding! That is just a stupid toy! How can that possibly help us?

SpongeBob: [gasps] Squidward, we must never question the wisdom of the Magic Conch. The club always takes its advice before we do anything

Patrick: The shell knows all!

21. Always look at the bigger picture.

There's definitely more than 10 mattresses there, but they've got the idea.

22. You don't always have to be the first to speak up.

You don't have to be the first or the fastest. Take your time, gather your thoughts and speak up when you're ready.

23. Hard work pays off, but don't fry your brain in the process.

SpongeBob: My name? [zoom inside of SpongeBob's brain again where all the SpongeBob's are searching for a name]

Smaller SpongeBob No. 4: Come on, baby, what's the name?!? [The computer bursts into flames. Panicked shouting is heard from other smaller SpongeBobs as they are running around while papers are flying]

Smaller SpongeBob No. 5: WE THREW OUT HIS NAME!

SpongeBob and Patrick may not have had the absolute best idea of fun that night but they knew when it was time to kick back, relax and have some fun (this is from the episode where they end up going on a panty raid with Mr. Krabs and they end up raiding the house of Mama Krabs... yikes!)

25. Always be prepared in case of a Sea Bear attack.