Whether you grew up with Totoro, Chihiro, or Howl, the Ghibli films you love made you the person you are today. 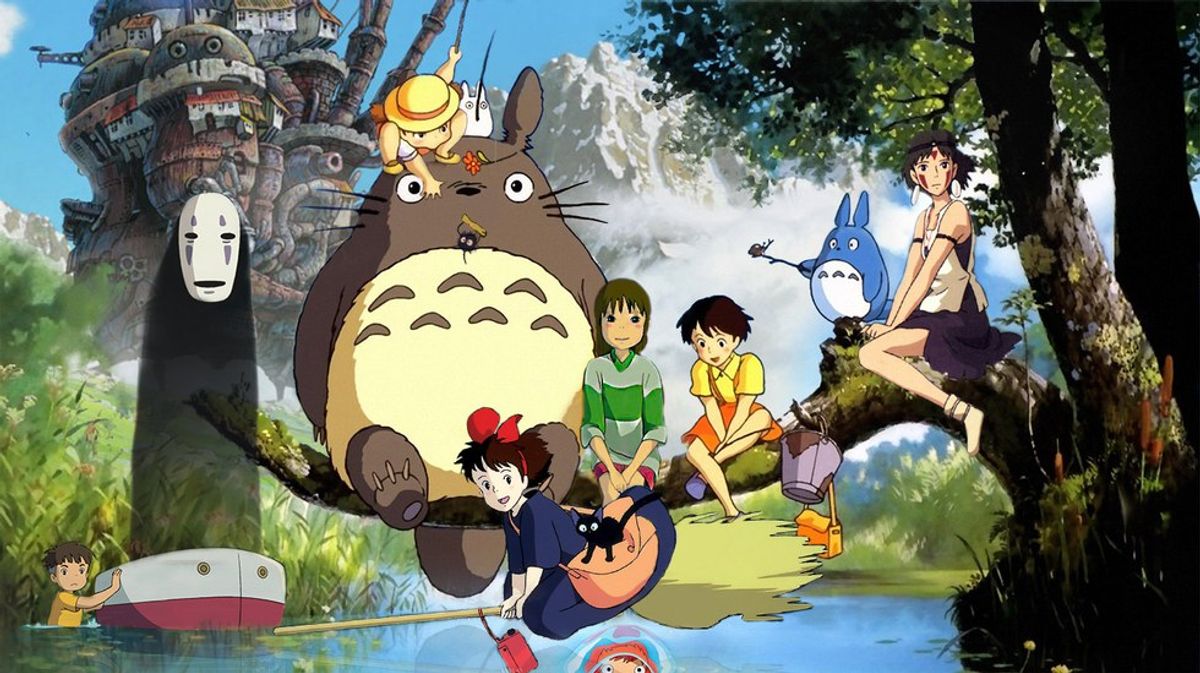 Studio Ghibli movies are known for their distinctive, anime-esque style, paired with iconic fantasy story lines and an emotional score that, all combined, evoke feelings of nostalgia. Sometimes for the childhood you once knew, or even places and people you've never known. Because of the effective use of visual, auditory, and mental storytelling, Studio Ghibli films have been a favorite of many a child, teen, and young adult. Whether you grew up with "My Neighbor Totoro" or are just binge-watching the entire canon, read on to reminisce on five lessons we all learned from these incredible films.

WARNING: Contains spoilers of "Spirited Away" and "Howl's Moving Castle".

1. Cooking and cleaning can be fun!

Studio Ghibli movies are known for their oddly-satisfying cleaning and cooking scenes, "Howl's Moving Castle" in particular. Many have often said that they come out of watching a Studio Ghibli movie wanting to clean their whole house, cook a delicious meal, or complete an unfinished project. The way these films artfully portray everyday tasks encourages us to work hard even at dusting, because if we work like the characters in the movie our lives can too become works of art.

2. A human relationship is more than just romance.

Hayao Miyazaki, a lead Studio Ghibli creator, is famed for his unique depiction of male-female relationships. It is rare that a male and female in the Ghibli franchise follow the formula of meeting, having sexual tension, flirting, fighting, and eventually kissing at the end. Instead, the relationship between the male and female lead develops through their achievement of the main objective. As both characters fight to protect each other and achieve their goals, they create a deep personal bond that differs from many movie romances.

For young people, especially children, watching these movies, this creates a very substantial and realistic depiction of what a loving relationship really is. While chemistry is important, deep love doesn't develop out of nowhere. It develops from knowing the other person, having a common goal, and wanting that other person to succeed and be protected.

3. We all feel overwhelmed sometimes, but we must keep going.

Chihiro in "Spirited Away" got one of the worst deals of any Ghibli protagonist. While others got to experience fun, magical lands, Chihiro was taken to the Spirit World against her will, stripped of her name and parents, and forced to work in a bathhouse to survive. For any eleven-year-old, the experience would be overwhelming or even traumatic, and the film realistically depicts Chihiro's despair at the new situation.

However, the film also depicts how Chihiro comes to terms with the fact that she must adjust to the new, unfamiliar situation in order to save her parents. Yes, she feels lonely and lost. But she also knows that she must do something in order to change her situation and escape the Spirit World. Chihiro's maturation from a child afraid and resentful of the smallest change to a teenager who is able to take even the scariest challenges in stride shows us that even though we may feel overwhelmed, that feeling is temporary, and will lead to a positive transformation if we choose to act. That is a lesson we can learn from at any age.

4. We have a lasting impact on nature, and we must be conscientious of it.

"Princess Mononoke" famously depicts a war between humanity and nature. The villagers continue to cut down trees in order to gain territory for mining and the creation of weaponry. These trees are vital to the survival of the forest and forest spirits, and the destruction of the forest compels the animals to go to war with the humans to defend the forest.

While not as mystical and with less talking animals, the same war in "Princess Mononoke" is occurring in real life. Climate change and deforestation are political topics that are often pushed aside in favor of national security and civil rights, but the respect we pay to nature is just as important as the respect we pay to each other. The harm we do to nature has tangible effects in the form of mudslides, rising oceans, and oil spills. "Princess Mononoke" taught us that the war humanity wages with nature is a losing one, and it's high time we put those teachings into real-world action to save nature and ourselves.

5. Hardship, while difficult, can improve your outlook on life in the end.

In "Howl's Moving Castle", Sophie begins the story thinking she's ugly and unimportant, foregoing nights out with the local girls to make hats alone. Once she is cursed by the Witch of the Waste, she is transformed into an old woman and her problems go from a negative self-image to trying to fight the forces of evil and break her spell. Through lots of hard work as a cleaning lady, making new magical friends, and falling in love, Sophie goes through a lot, but doesn't dwell over her appearance quite as much as before. In the end, when she is transformed back, she realizes how beautiful she really is, inside and out. Such a story is reassuring to anyone going through hard times that the end is never quite as dismal as it may seem, and may even be more positive than the beginning.

There you have it: Five Ghibli lessons that have motivated us, made us aware of global issues, and strengthened us in the face of adversity. The studio Ghibli films have had a huge impact on me as a person. While they greatly influenced my affinity for storytelling and my love of animation, they have also taught me how to grow up. I hope they continue to cultivate a generation of optimistic, determined individuals who live their lives full of Ghibli magic.