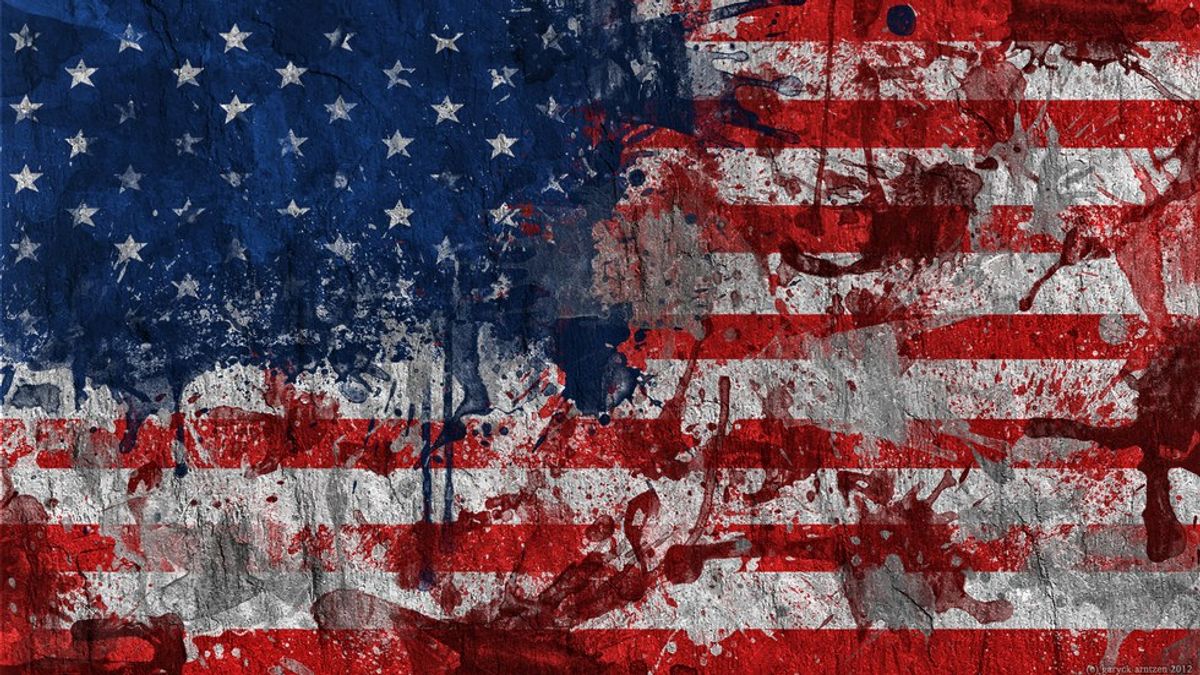 Waking up today, the sun still rose. The apocalypse hadn’t come, the world order hadn’t collapsed, the planet was still turning. Yet it felt like it was spinning in a rather peculiar way on its axis. In one way, it was turning far too quickly. A day I was not prepared for had come, a day I’d never expected, and it seemed as if time was approaching with unnatural haste, forcing upon me the weight of the previous night’s events. And at the same time, it felt as if our globe’s revolution was somehow going backwards. All I could think of was a year gone by, a year of slander and satire and sanctimonious preaching, of hatred and xenophobia, of anger and fear, of shouts cried out and ears too high to listen to them. This election year all came crashing down to this oddly spinning Earth, one reality sitting in the pit of my stomach.

Donald Trump is the president-elect of the United States.

There are millions of Americans who cannot believe what has happened. We cannot fathom putting our faith in this man. We cannot understand his appeal. We cannot comprehend how those who support him don’t see that he is but a glittering statue upon a crumbling clay pedestal, a skyscraper with no foundation. His ideas are nothing but fallacy and fantasy, this is clear from any examination whatsoever. His cry of making America great is the cruelest joke of all. Nothing he stands for will make America great. Nothing he has promised to do will make America great.

And yet, he will be president. As I write this, Hillary Clinton in fact stands poised to win the popular vote, but Donald Trump will handily defeat her in the electoral college, making his cries of a rigged election almost ironic, if it weren’t so heartbreaking. He will be president. And though it is hard now, the one thing that gives me solace is the lessons we can learn, the lessons that we must try to learn, from this election's results.

The first must be learned by my side, the progressives of the United States. It is a lesson in loss. Through the past two elections, around half the country felt the way we do today. The only elections I can recall vividly are the elections of Barack Obama, memories steeped in hope and victory. For people my age, this is our first experience with utter political tragedy. Every election season, this is the fate of half the country. For now, it is our turn. We must contend with this emotion, with that haze over our minds whispering that the nightmares that we never for a second entertained are now the truth of America. This pain, it is our turn to bear it.

The second is that there is a large segment of the United States that many of us on my side, the progressives, simply did not know. There will be a Republican senate, a Republican house, and a populist alt-right president. There is a part of America deeply disenchanted and frustrated with the direction our country has taken in the past eight years. Barack Obama said there were no red states or blue states, only this country, only the United States. And now we know, it is absolutely affirmed, this was wrong. America is a nation deeply divided. We may not be red and blue states; this is a country in the throes of dealignment and realignment, so partisan affiliation seems cheap. But today, there are those cheering and those weeping, and the chasm between the two is wide and deep, and in these early hours following this election, seemingly endless.

The third is that our political system is broken. Donald Trump winning the presidency should not have been the rude awakening to make America realize this. But today, over 50 million citizens declared with their ballot that they were angry. That things weren’t working. That as the forces of globalization and interconnected world were supposedly bringing the world forward, they were being left behind. That the politicians weren’t hearing them, that their problems weren’t being understood. For them, the system was broken. And for those who voted for Clinton, not because of a loyalty to her and her policies but simply to oppose Trump, for them the system is broken too. Because America cannot put up feasible third-party candidates, because last night the country was forced to choose between two of the least popular candidates of all time.

And the fourth is this, the fourth is the most important. This campaign season was defined by divisiveness and animosity. There was no search for common ground, no civility, no chance that this night would end without half of us feeling immense pain. This election ripped at the fabric of our country again and again, tearing with greedy hands, shredding our common identity to scrounge the votes to win. And now we are here, some joyous, some terrified, all Americans. This country is still one country, it is still our country, and we share it. Undoubtedly, there are different visions of this country. The man who will swear to uphold the Constitution in January has expressed a future for America and a set of values for America that are utterly and totally different from mine. But he will be my president. For those on my side, for those in pain, the great lesson from this moment should be that somehow, enough Americans felt abandoned enough to entrust Donald Trump with the leadership of the free world. Not all these people are deplorable. Many of them are good people. But these people gave power to a man who is not good, who is not decent, who is not moral. People like me must realize that this election is a sign, a signal that things need to change. Fundamental, basic elements of this country need to be repaired. We need to find a way to work with those who disagree with us, we must work to build a bridge across the chasm that divides America today. A strong one, a sturdy one, one we can stand on.

This is the responsibility of winners and losers alike. If anything, I hope after this election that the people of the United States do not vilify one another, do not attack one another or hate one another. This seems almost impossible in this moment, and it just might be. But remember that this is what America signed up for when democracy became the law of the land. And ours is a messy democracy, one where it appears that the candidate who received the popular vote will not win the election. But this is our democracy. It is clear that something has to be altered, that something has to give. But for now, I am tired, my head is full of nonsense, and I want to shake off the dirt I feel caked in after such a gruesome election. There is no pride in me for my country today. Only the future will tell if I will feel that pride again.