A Late Review Of "Time's Arrow" on "BoJack Horseman"
Odyssey
CurrentlySwoonLifestyleHealth & WellnessStudent LifeContent InspirationEntertainmentPolitics and ActivismSportsAdulting
About usAdvertiseTermsPrivacyDMCAContact us
® 2023 ODYSSEY
Welcome back
Sign in to comment to your favorite stories, participate in your community and interact with your friends
or
LOG IN WITH FACEBOOK
No account? Create one
Start writing a post
Entertainment

A Late Review Of "Time's Arrow" on "BoJack Horseman"

And why it's more relatable than you think. 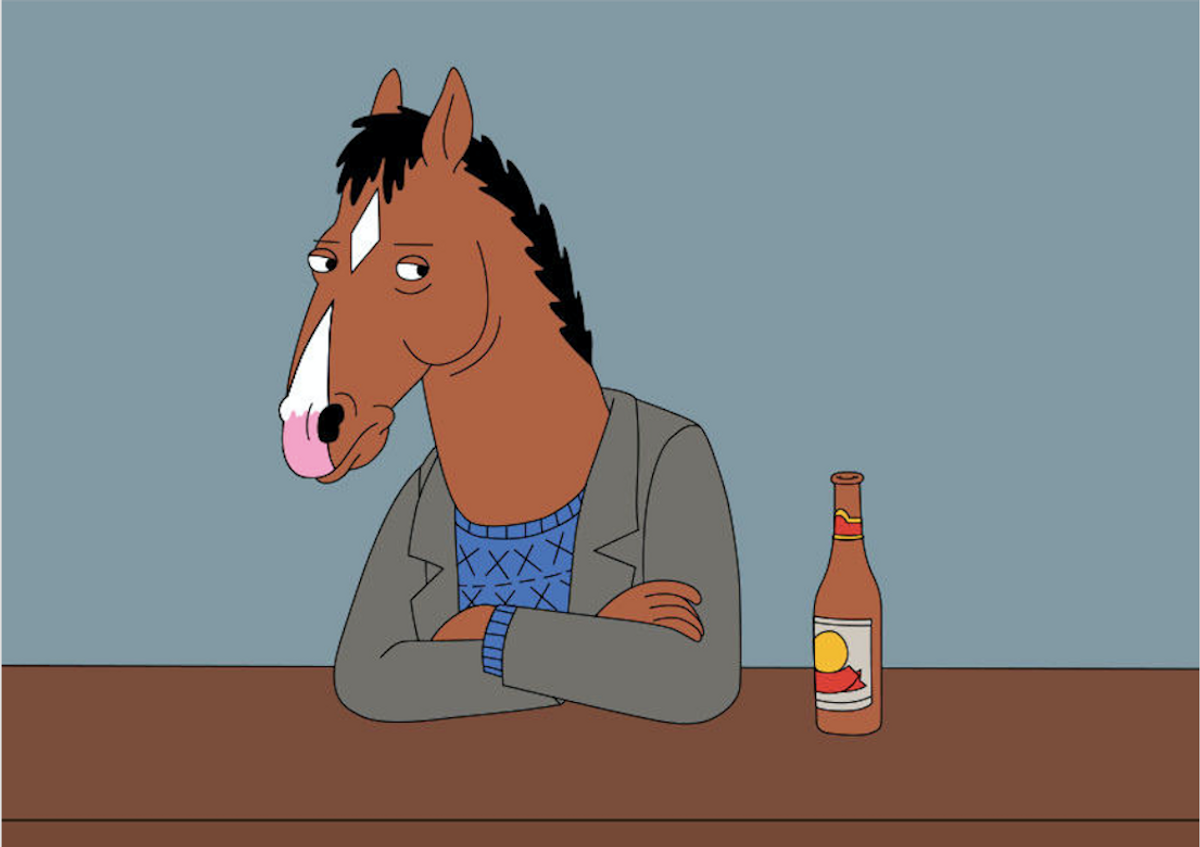 A cartoon half-horse named Beatrice appears on your computer screen. She calls her son BoJack, who is also a half-horse, Henrietta, a name that so obviously is not his. This farce goes on for seven half-hour episodes of the Netflix Original show, culminating in episode 11 of “BoJack Horseman,” called “Time’s Arrow,” where the two of them are driving on the highway in a yellow convertible, until the frame pans to Henrietta in the driver’s seat and a younger Beatrice beside her. Are you confused as to why there’s a cartoon horse talking to a person with a scribble for a face? Well, the scribble is an illustration of Beatrice’s deteriorating memory, a visual representation of her dementia. The episode creates such an immersive experience that it tail whips you into a Haagen-Dazs-fueled emo hour you will want to repeatedly indulge in. It’s the feeling of your life slowly derailing as you unsuccessfully balance the ‘important’ things in life. But then you think “I’ll watch this pathetic horse deal with his dementia-riddled mother, at least I’m not him!” Or, if you too have a mother with dementia, you’ll think “Hey, this horse is just like me, it makes me feel better knowing that I’m not alone!” It’s not watching how dementia had reconstructed the brain of a half-horse that leaves your head with that prickly sensation you get before crying. It’s the episode’s terrifying ability to make you see your own grandmother in the space Beatrice occupied in the episode.

Part of what makes “Time’s Arrow” so deliciously painful is the ability to make connections to personal life experiences throughout the entirety of the episode. In “Time’s Arrow,” we find out why Beatrice is a terrible mother to BoJack: her upbringing. She lived in a household with a father so traditionally deranged he had her mother lobotomized (and then later said he shouldn't have “even bothered” because she was useless to him). The reasons for why she had such a crappy upbringing are so human, you forget that from the shoulders up she’s a horse. A father that was constantly after her weight and knocking her intelligence, a bout of scarlet fever, going against her father’s wishes by running off with the “bad boy” horse instead of the wealthy one, an unplanned pregnancy, and a husband that cheats on her with Henrietta the maid. Tell me none of these sound familiar. It is hard not to draw at least some connection to your own life when watching, because a thought about a time when you were bullied about your weight, or when your friend was cheated on will involuntarily stick its head around the corner to say hi before you could think it away. These aggressively human plot points are enough to make you question why you’re relating to a cartoon horse, but it’s the most unhuman aspect of the show-the animation- that helps you cross the line between finding it relatable and finding it to be a cartoon version of your life.

All of the characters in Beatrice’s flashbacks either have no face, or in the case of Henrietta, her old maid, reckless scribbles that move around like white noise. This scribble is unsettling because instead of seeing a face, we’re teetering on the edge of the uncanny valley (the belief that things that look very close to human without actually being human are very disturbing to people).

The detail the producers put into capturing this confusing illness creates an animated version of horse-inception. Beatrice’s family portraits shift from past portraits to present, the backgrounds are in a double vision split, and the frame glitches when her memories are playing out on screen. All of these details are important because they are the visual representation of an illness we cannot physically see, and they show us Beatrice’s memories through her perspective. The memories of those with dementia are fuzzy and glitched. In a sense, the show gives us all dementia because we know as much as Beatrice does. The shadow of Beatrice’s lobotomized mother flashes over her silhouette, a scar on her head, is a clear nod to her having a damaged brain, just like her mother. A memory of her father telling her younger self he has to burn all of her things because “Your sickness has infected everything. It all must be destroyed for your own good,” is used to refer to the loss of most of her memories. The line knocks the back of your knees, jerking you forward. In that moment, you become aware that all of the memories created throughout life are destroyed by dementia. Beatrice is just like her mother now, a horse with a faulty brain. It’s nauseating because in the end, it’s inevitable we’ll become our parents and experience the same deterioration.

I’ve said this is one of the best episodes in the series, but it’s really one of the worst, because you can’t just watch it and then carry on with your day. It’s perfect for a night where you’re looking to indulge on some self-induced depression. A little over five years ago, my grandmother was diagnosed with dementia. If I had no knowledge of the series prior and watched this episode all of the way through with my eyes closed, I would have thought they were telling my grandmother’s story. Calling my mother by her sister’s name, the faces without names, the most prominent memories in her life being the only ones she recalls. It’s hard to understand all of these things that happen real-time in dementia patients, but a cartoon was able to sum it up in 30 minutes. It’s a moment of “Oh my God, they understand,” and it’s a moment of “What the hell did they just do to me,” because they just used horses to produce serious content about dementia, and now you’re crying for your grandma Judy and for yourself because you’re vulnerably aware that one day you’ll be just like her, and seriously, dementia looks like a personal hellhole your mind locks you into.