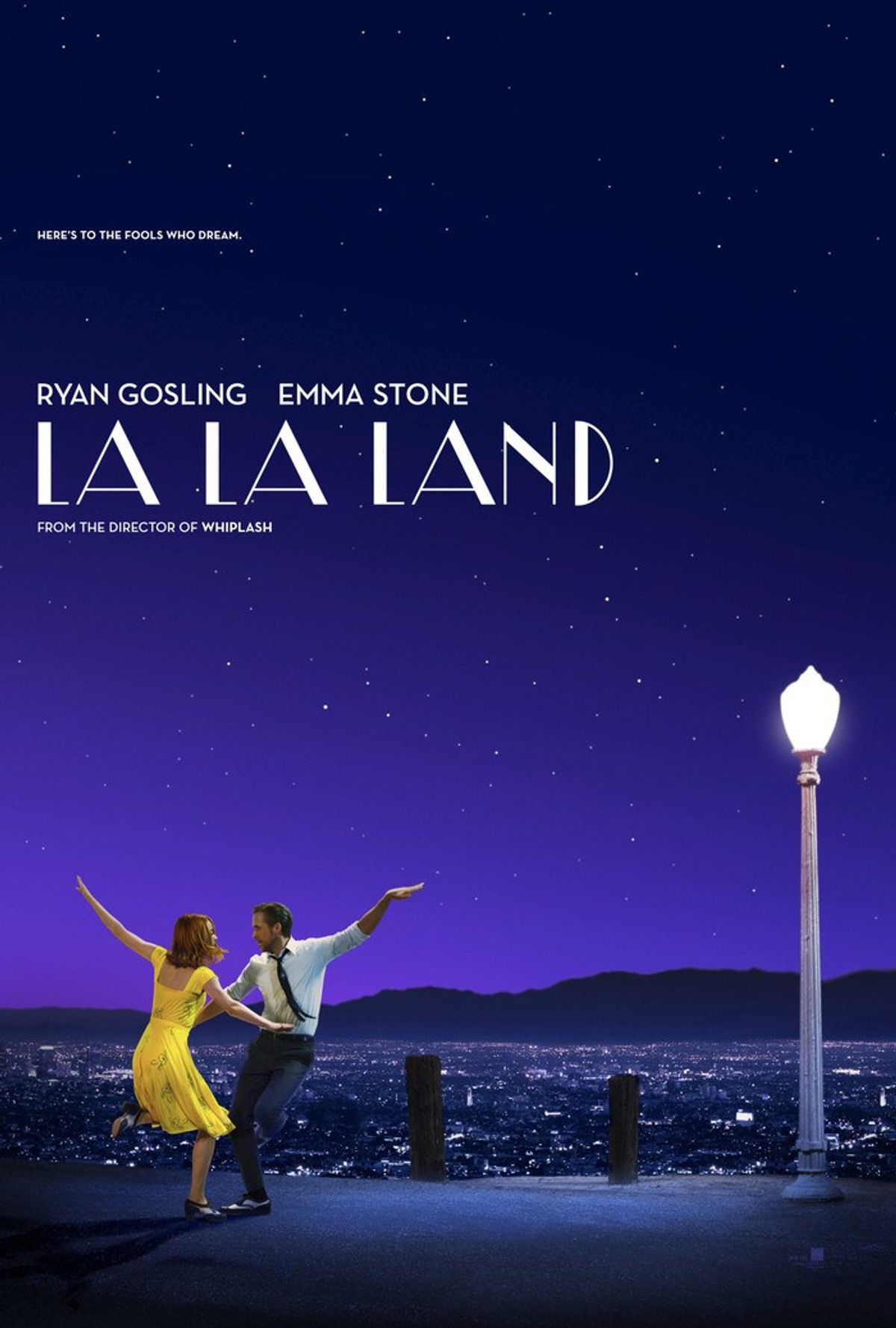 I won’t lie: I was skeptical to see this film at first. Although I admire Chazelle’s Whiplash, a film like La La Land that generates too much hype and award love may result in my interest of seeing the film go away. Alas, people kept on pushing me into seeing it in theaters, so I went last Saturday. The lights dimmed and out comes big, colorful words saying: PRESENTED IN CINEMASCOPE. The camera pans across a highway showing many people in their cars stuck in traffic, presumably on their way to work. What I did not expect was to see a masterful opening of a musical number. Believe me when I tell you that this is a film in which every frame bursts with passion and dedication.

Damien Chazelle’s La La Land is a nostalgic, elegant film that holds you under its hypnotic spell and doesn’t let go. It is much more than a beautifully choreographed and filmed musical, but it is also a celebration of a genre of film that over the years has arguably diminished in popularity. Let me explain this more accurately: its central homage is to the grand musicals of the 1950’s and 1960’s that were filmed in large film stock (such as 70mm) to make the images appear bigger, like West Side Story, My Fair Lady, and Porgy and Bess. Also, they include montages of wonderful musical numbers where the actors can show their dancing talent (although no one can match film legends Fred Astaire and Ginger Rogers in this area). La La Land contains all these elements, bringing forth a classical style of film that serves to touch are very emotions and genuinely feel for these characters. And, of course, marvel at all the singing and dancing.

The film stars Ryan Gosling (in peak form) as Sebastian Wilder, and Emma Stone (giving her best performance to date) as Mia Dolan, living in Los Angeles as the film opens during the winter. He is an aspiring jazz pianist, working at a nightclub playing songs grudgingly while longing to start his dream of starting a jazz club. She is an aspiring actress, working at a coffee shop as a barista while dreaming of making it big as an actress. Mia goes to many auditions, where she is repeatedly interrupted and rejected without remorse. Sebastian is fired for playing free jazz at work, since his boss (J.K. Simmons) is a jazz hater and prefers Christmas jingles. It seems life has hit them in the head with an anvil, and at that exact moment is where they meet. Little by little, with each unexpected encounter between the two, they begin to form a relationship of sorts that eventually blossoms into love.

Other than the thrilling musical number at the beginning (one which I should study to see how it was filmed), many scenes include song and dance performances crafted by master filmmakers. The “A Lovely Night” number shows Mia and Sebastian bonding at the top of Hollywood Hills as they explore their curiosities for each other. Their next date occurs at the movie theater for a showing of 1955’s Rebel Without a Cause, and then towards the Griffith Observatory (the same one used in the 1955 film). In a scene graced by magic, the two lovers begin to float and literally dance off into the stars (a shot which recalls the ending of 1959’s animated film Sleeping Beauty). And the film goes on, showing a great scene after another.

Gosling and Stone excel in showing people dominated by their emotions and the past. Both are surprisingly good at singing, especially Gosling as he sings and struts to “City of Stars” (which is rumored to be frontrunner for the Best Original Song Oscar) with ease and grace. However, this film is Emma Stone’s shining moment as an actress. Winning the Best Actress award at the 2016’s Venice Film Festival, Stone is a marvel in showing the internal struggles of Mia through dialogue and lyrics alike. Just watch her sing in “Audition (The Fools Who Dream)”, a knockout sequence that will have the whole theater in tears.

(Spoilers in this paragraph. Skip if you have not seen the film!) Finally, I should mention the final musical number. Running at around 8 minutes, the sequence shows what would have happened if Mia and Sebastian’s plans of being together had turned out. A tribute to the famous 20-minute sequence in An American in Paris, the montage turns out to be a dream by the two ex-lovers. Even though the film ends on a happy note, we understand the tough sacrifices each made for the sake of their own happiness and dream occupations.

To conclude, La La Land is what I would describe as a true original. I urge people to catch this film in theaters to truly take in the experience of this sunny bright musical achievement. One reason why I truly enjoyed this film is because it shows with clarity that through hard work and sacrifices is how one truly gains happiness. And it sure gave me stronger motivations to work hard for my own dream of making it big in the film business. How can a film that shows this clearly to me not deserve my respect?