It’s meta stuff, and it reeks of Tina Fey. 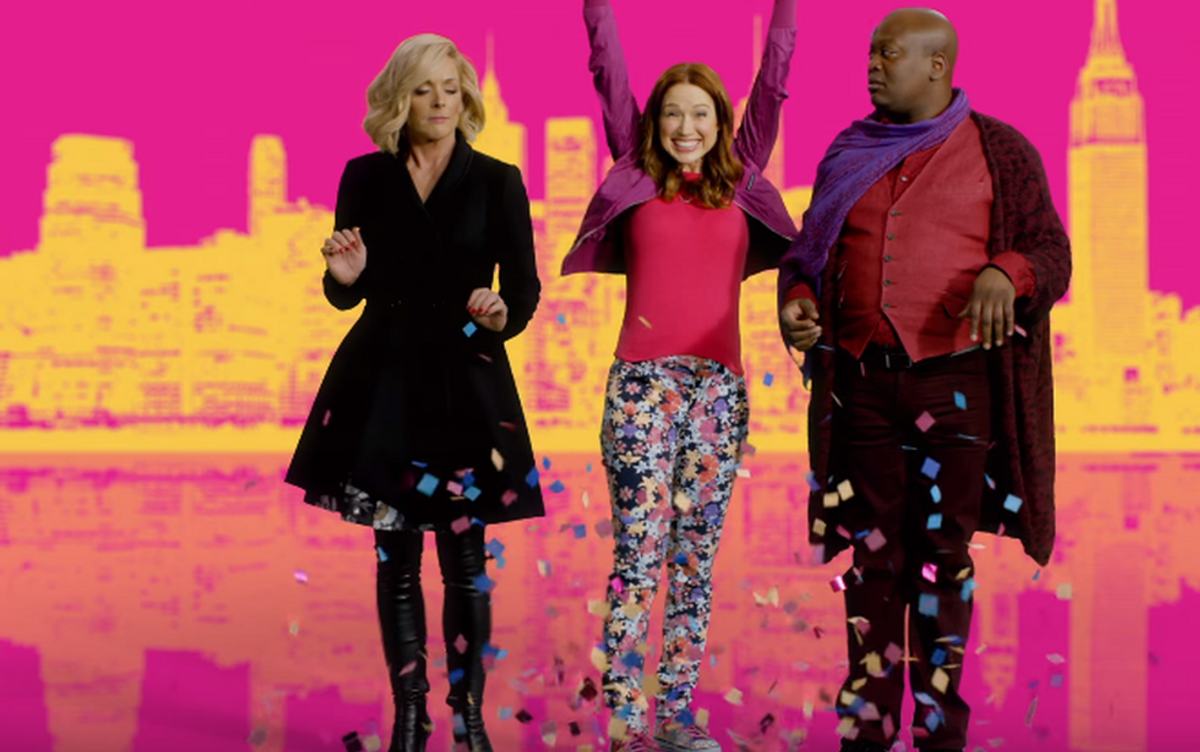 Kimmy Schmidt is back with more jokes than ever. Released on Netflix last Friday, season two of Tina Fey's Netflix original comedy "Unbreakable Kimmy Schmidt" continues the story of a young woman named Kimmy trying to make her way in New York City after being trapped in an underground bunker with three other women for 15 years. The show centers around Kimmy, her roommate Titus, their landlord Lillian, and Jacquline White Voorhees, Kimmy's boss.

The most notable thing about season two is that the joke density is so much higher than season one. Kimmy’s backstory is already solidified and the viewer is invested, so instead of harping on the reason why Kimmy doesn't know how to be a real human, they can just jump right in with everyone else's jokes too.

Here are some of the comedic gold mines.

1. Everyone knows about the Kardashians.

Not all that different from our own world, everyone in season two of Kimmy’s world is really confused about why and how they know so much about the Kardashians. This running joke is seen in a lot of episodes, and it starts with Dong (Kimmy’s Vietnamese love interest) explaining that he’s improved his English by watching the family’s reality show. The joke is a pretty telling social commentary on the state of journalism, criticizing the fact that even if people don’t want to “keep up” with the Kardashians, they still know about them. As Kimmy says, we see it on “the regular news.”

Mike Carlsen joins the "UKS" cast as a gay construction worker who isn’t "out" out at work,” as he tells Titus. When explaining how he keeps up his macho masculine persona around his fellow construction men, he says he does all the “normal” things: going to strip clubs, catcalling, and painting “a hot chick” on the back of his truck. And bam! Cue an airbrushed Tilda Swinton on the back of Mikey’s pickup. It’s perfectly timed and definitely my favorite joke of the entire season.

New York socialite Jacqueline White (formerly Voorhees) has a lot more on her plate this season. Played by Jane Krakowski, she has to deal with cutting many of her life’s luxuries after getting only $12 million from her divorce at the end of season one. She also has to learn how to do a lot of things on her own, including cooking, as we see in these gifs that succinctly sum up the college experience for many.

Anytime any of the main characters on this show use a computer, it’s hysterical. In Episode 3, Kimmy’s roommate Titus goes to the library to search for a place where he can buy a costume for his one-man show and realizes people are talking about it on the Internet. He exclaims his excitement but is quickly silenced by a strict librarian. His response to being hushed? To take a “face journey” through the comments section. We then watch Titus’ over exaggerated facial expressions as he reacts to the negative comments on his highly controversial show. The librarian shushes him again, and we then see a sign prohibiting “face journeys” in the library as well.

I didn’t actually catch both of these until going online after I finished binge-watching the season, but they’re subtle and amazing. If you saw season one, you know Jon Hamm plays the Reverend who kidnapped Kimmy and the other three "Mole Women" and held the underground for 15 years. Jon Hamm also played Don Draper on "Mad Men" for seven seasons.

In episode four, Kimmy gets a call from fellow Mole Woman, Cyndee.

She’s speaking of the Reverend, and the line is a subtle but intentional nod to Jon Hamm’s role as Don Draper.

Later in the episode, Kimmy says tells other Mole Woman Gretchen that the Reverend claimed he came up with the “Buy The World a Coke” commercial, poking fun at the Mad Men series finale featuring the famous “Hilltop” Coca Cola ad. It’s meta stuff, and it reeks of Tina Fey.

This is a joke that a lot of people probably didn’t catch, but I was personally rolling. Back in 2013, Tina Fey and Amy Poehler hosted the Golden Globes and made a knock at Taylor Swift’s love life, like basically every other comedian in the game at that time. Taylor’s response to Vanity Fair included the Madeleine Albright quote: “There’s a special place in hell for women who don’t help other women.” Fey and Poehler were pretty gracious in their responses, and Fey even joked about the situation again at the following year’s Globes.

In episode nine, Kimmy and Titus have a roommate quarrel and Titus dishes out the same quote. To those up to date on their pop culture feuds, the line is an obvious dig at the entire Globes situation.

Again, it’s all very meta, and it's all very Tina.

There are so many more hysterical jokes, and you can watch them in all 13 episodes, now on Netflix! While the show has its share of flaws and criticisms, there's still plenty to love. It's an upbeat, refreshingly optimistic show about believing in yourself, accepting all your weird quirks, and believing that tomorrow will be better than today.