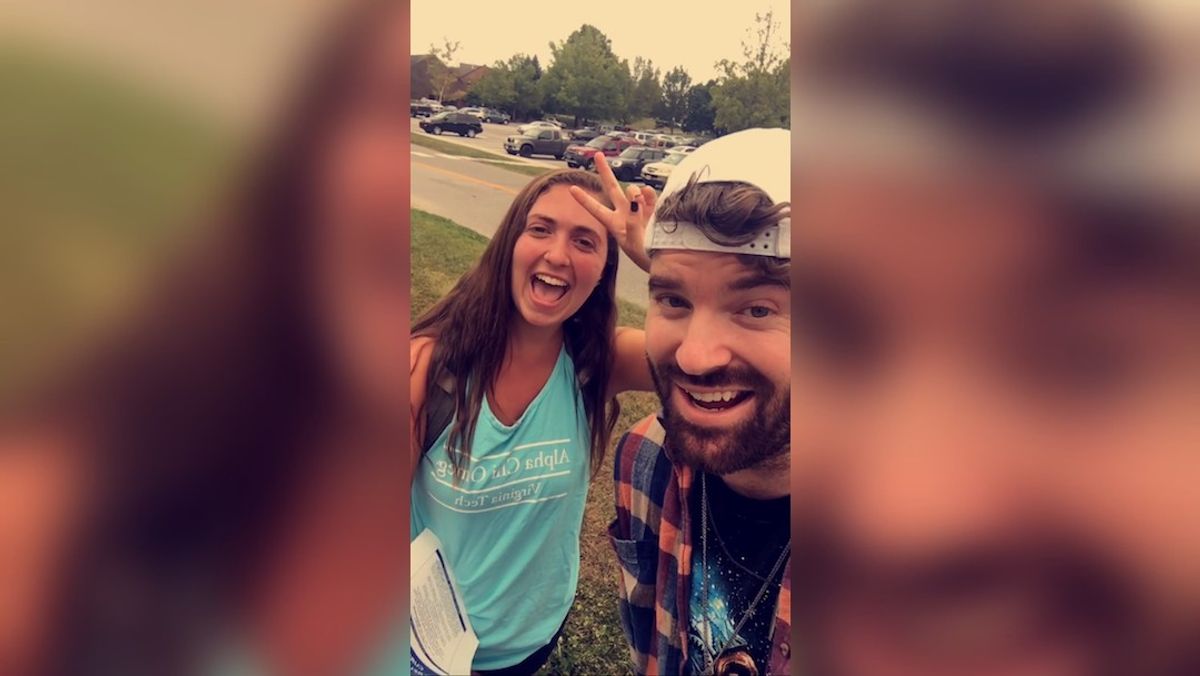 I figure a huge perk of me being a creator on Odyssey is that I can do PR for myself. This is definitely not in the contract but it is absolutely what I am about to do.

A few weeks ago I was enduring in a sweaty walk home. I live on what most folks would call "Greek row" but it is more like "Greek circle" and instead of nice houses, it is filled with brick-like suburban homes that are a STRETCH to call a sorority/fraternity house.

Anyways, I was walking and listening to Red Hot Chili Peppers (lots of teen angst for a 20-year-old) when I see a MAN waving at me from in front of one of the houses. I am all about being friendly but this guy was like WAVING so I naturally didn't think he was waving to me so I looked behind me to see if there was another boner like myself walking home in this heat and there wasn't.

My next question is "why are you here." I say it in a nice way because I am still trying to get the rose by the end of the night, and I promise him that I am here for the right reasons.

I kind of blacked out when I was talking to him so from what I gather/what I have told everyone is that he was traveling with his band from South Carolina to Chicago and got mad hungry and stopped at VT. He put up a story on Instagram and someone from Virginia Tech responded asking him to come to "Greek row" because she and her sisters wanted to meet him.

Well sorry, bitch, but I am the lucky duckling because your phone apparently died.

So here I am with James Taylor in Greek row. Talking about his experience on "The Bachelorette" and what it was like for him to be dumped on television. He said it was a huge confidence boost.

After a lovely conversation I had to leave because I have a family to support, but instead of being a wimp I asked for his number. If I could have this much confidence in asking random dudes for their number I would probably be married by now.

My sorority, Alpha Chi Omega, has our annual philanthropy October 23-25 called Mock Rock. Our philanthropy is for domestic violence awareness and the money/donations we receive goes to the Women's Resource Center in the New River Valley. On the third day of our philanthropy, we have a lip sync competition where organizations each choreograph their own dance and perform it. It is lit, not to be cocky. We love to have fun judges because it makes the event even more exciting.

The other week my friends were asking if I knew any celebz that could judge the lip sync portion. I was like, naw, man. They were like "don't you know that James Taylor guy" and I was like you right as hell. I do. AND I have his number.

There I was. Texting him. He quickly responded with a yes of course I'd love to as if I had only asked him to swipe for me at a dining hall.

All in all, James Taylor will be coming to judge Mock Rock October 25th so get your heart strings ready because they WILL be tugged on. SHOW STARTS AT 7, $5 ADMISSION AT BURRUSS.

Disclaimer: Please no one dump him. He has suffered enough.

Me sweaty on my walk home. Definitely weird for him to meet a celebrity but he was mad chill about it.