Soomi Kim and Suzi Takahashi revive the voice of Kathy Change in their devised docudrama at HERE Arts Center. 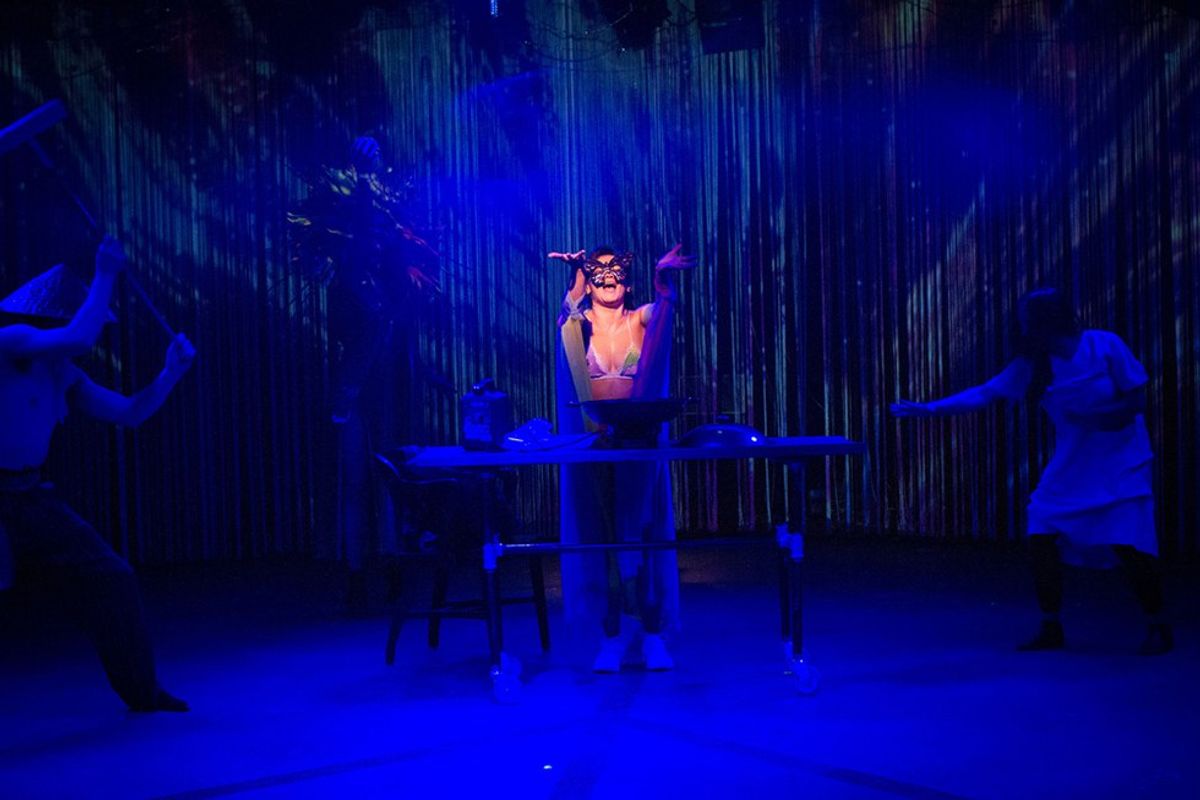 In a 1996 address to students at the University of Pennsylvania, Kathy Change wrote: “I want to free my spirit so that it can jump inside of you.” In their devised play “Chang(e),” artistic collaborators Soomi Kim and Suzi Takahashi attempt to bring back Kathy’s voice in order to explore her idea of truth and what that may inspire today. Born Kathleen Chang, the late radical activist and performance artist fearlessly advocated for world peace and against the government. She situated herself on the campus of the University of Pennsylvania for years, calling out to students whom she believed to be the next generation of leaders to initiate revolution.

The audience entered the world of Kathy Change through blue streamers. From the ceiling of the small blackbox theatre hung an eclectic collection of lights, strings, disco balls, and paper lanterns. The stage, just slightly below the risers that surrounded it, was marked by an enormous black peace sign. Using elements of music, dance, film in combination with traditional elements of documentary theater such as interviews with and writings of Change, a cast of seven actors guided an audience through her life and her mind in a piece that was part docudrama and part dream reality.

The show did not attempt to create a biography of Change. The majority of the play’s characters were fictionalized, and the “real events” slipped into imagined dream sequences. It was an appropriate method with which to portray Kathy’s life, given that her own goals stemmed from real world problems but looked toward utopian solutions.

The show's greatest successes were the questions that it generated. Though no single event stands out as the conflict, Kathy’s struggle is her fight to be heard. We see Kathy being passed by in the rain, mocked by students, shunned by other artists, and rejected by publications. The fact of her audience’s neglect leading up to her 1996 self-immolation raises questions of the aims and achievements of radical activists. If no one is listening, what are they accomplishing and how do they persist?

It’s all too easy to dismiss the words of radicals, to call them crazy, to ignore their cries. Perhaps it’s true that their ideas aren’t practical, perhaps they are at times hard to understand. But if radical approaches are not the answer, neither are passive alternatives. Is there a single point on the spectrum, an exact formula, or a correct way to be an activist?

As the rising generation, we all like to call ourselves activists, searching for our places in various movements somewhere between hashtags and peaceful protests. We know that we want change and are quick to identify problems and condemn them. Sometimes we even propose solutions, but this is the hard part. Listening to Soomi Kim recite Kathy’s speeches on stage, I could feel her passion and understand her frustrations with the world. But the thought kept running through my mind: What exactly is it that she wants? It’s harder to picture the future than look at the present, it’s difficult to mark progress when the goal is out of sight.

“Chang(e)” concluded its run at HERE Arts Center on Nov. 22nd, having revived the voice of an artist and provoked the audience to reconsider their relationships to reform.