The Importance of Acknowledging Mental Illness 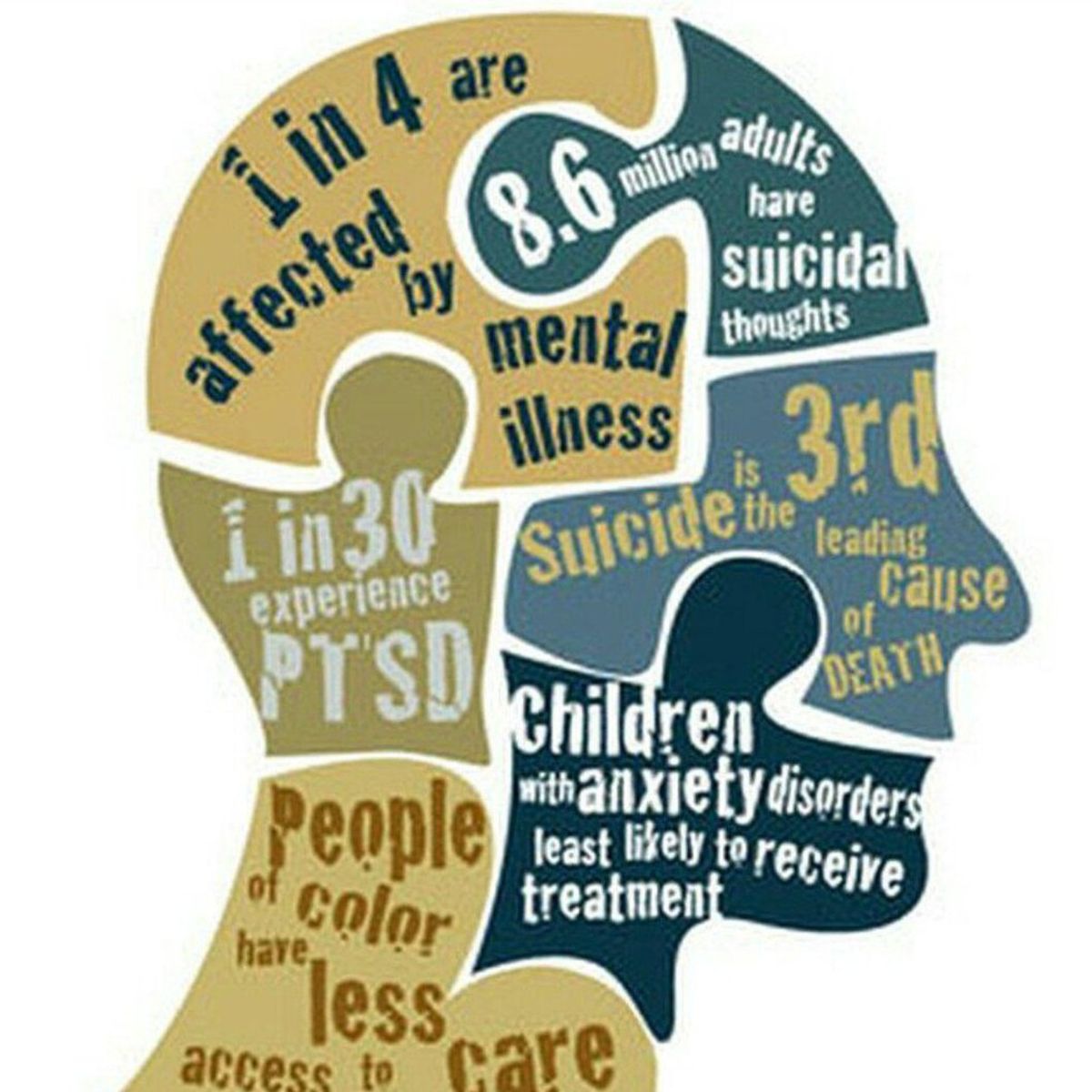 Something that has caused me so much grief in my life is the fact that no one around me talks openly about mental illness. I’ve known for a while that many people in my family, on both sides, suffer from depression and anxiety, but I’ve known in the way that someone whispers about infidelity or gambling away a life’s savings. There’s always a secretive, negative connotation involved that destroys the hope of ever helping the person, simply because people around them do not fully understand that mental health is valid.

Mental illness is a taboo subject

According to the Anxiety and Depression Association of America or the ADAA, only one third of about 40 million Americans suffering from anxiety disorders actually get help. I think a lot of this has to do with the fact that it’s a clandestine, stigmatized issue. It’s very hard to work up the courage to ask for help, and with no support system or with the people around you invalidating your experience, it becomes an nearly impossible task. The ADAA says that new research has shown that mental illness runs in families like diabetes or allergies, which makes sense to me because my family is an anxiety ridden bunch. Biology aside, doesn’t it make sense that children raised around very anxious people would develop anxiety disorders as well?

Let's talk about it

What I want to stress (no pun intended) is the importance of having an open dialogue about mental illness in order to build a support system. Everyone in my family would be better off if we actually talked about our issues instead of pretending they don’t exist. My siblings and I have taken the initiative and talk to each other about our mental health, comparing and contrasting the ways our anxiety manifests. When my brother started having excruciating chest pains, he was taken to the doctor and it was all but dismissed as “growing pains.”

My cousin started to have a similar experience, tightening of his chest, shortness of breath, and a feeling of overall panic and fear. Once these episodes were identified as anxiety attacks for both my brother and cousin, they weren’t taken as seriously as they should have been. They weren’t given any tools to manage their anxiety and it was just swept under the rug along with all the other various mental illnesses rampant in my family. For the longest time I had no idea that my aunt had been medicated in the past for depression nor that the reason my grandma appears to have no desire to wake up in the morning is because of her depression that everyone acknowledges, but no one wanted to help her with. My uncle never leaves the house and the family loves to shit talk him for his “antisocial” behavior, but yet again, no one takes his depression seriously.

This is unacceptable. If we ever plan to move forward, we need to talk about these things and address the problem head on. Society as a whole likes to pretend mental illness is not actually a thing, and my family is a microcosm of these same sentiments. If people were more open to talk about mental illness and take it seriously, it could lead to early intervention and treatment. A support system could be created and the person or people who have mental health issues would feel less alone and more willing to talk about their problems and get help. It is so incredibly hard to take the step of seeking professional help, we tend to feel so alienated, alone, and afraid. With people around us sharing compassion and love, it would definitely be easier to take the next step.

One illuminating moment for me was talking to a family member who actually acknowledged his own mental health issues, and the issues of the rest of the family. He witnessed the events of 9/11 and has since dealt with PTSD and anxiety, and talking to him about my own anxiety was eye opening. First of all, I’m a very emotional person, and I own my emotions having no problem talking about anything and everything, much to the dismay of members of my family who simply bottle everything up and let the wounds fester. So finally being able to address the mental issues I’ve witnessed my whole life in myself and my family was honestly like a weight being lifted off my shoulders.

Talking about it made it real, talking about it with someone who knows what I’m going through made me feel supported, understood, and less alone. My heart breaks for my family because I know they are suffering alone, not fully understanding what they are going through, and at the same time not being understood or taken seriously by society. My uncle was shocked when I told him that all of my siblings and I suffer from anxiety because he had no idea, and I told him that our family absolutely needs to talk about these things in order to ensure a better future.

Recently, I was in Rite-Aid looking at magazines and a book caught my eye; a self help book about anxious parents raising anxious children. There’s not much we can do in terms of the biological aspect of mental illness, but we can change the environments in which we raise children. We can show our children that we have an open dialogue about emotions and mental health. We can show them that their feelings are important and valid and that they matter, and only then can we begin to change the way people view mental illness.

Again, I cannot emphasize enough, WE NEED TO TALK ABOUT IT. Sure, talking might not solve everything and it’s best to seek professional help, but having someone there to listen to you and attempt to understand what you’re going through is extremely helpful and could make a world of difference. Talking to my uncle gave me hope because someone actually listened to me and took me seriously, and I want the rest of my family members to feel this too. I want all of you out there who are shut out by your family or not taken seriously to talk to someone, anyone, about what you’re going through. That way in the future we are not scared into silence, allowing cycles of mental illness to transcend generations and affect future lives. We won’t be anxious parents raising anxious kids, we will equip them with the tools necessary to combat their anxiety.