This Is What America With Trump As President Is Going To Look Like
Odyssey
CurrentlySwoonLifestyleHealth & WellnessStudent LifeContent InspirationEntertainmentPolitics and ActivismSportsAdulting
About usAdvertiseTermsPrivacyDMCAContact us
® 2023 ODYSSEY
Welcome back
Sign in to comment to your favorite stories, participate in your community and interact with your friends
or
LOG IN WITH FACEBOOK
No account? Create one
Start writing a post
Politics and Activism

As a country, we have shown our true colors by completely ignoring the cries for help from innocent people all over the world and even in our own backyard. 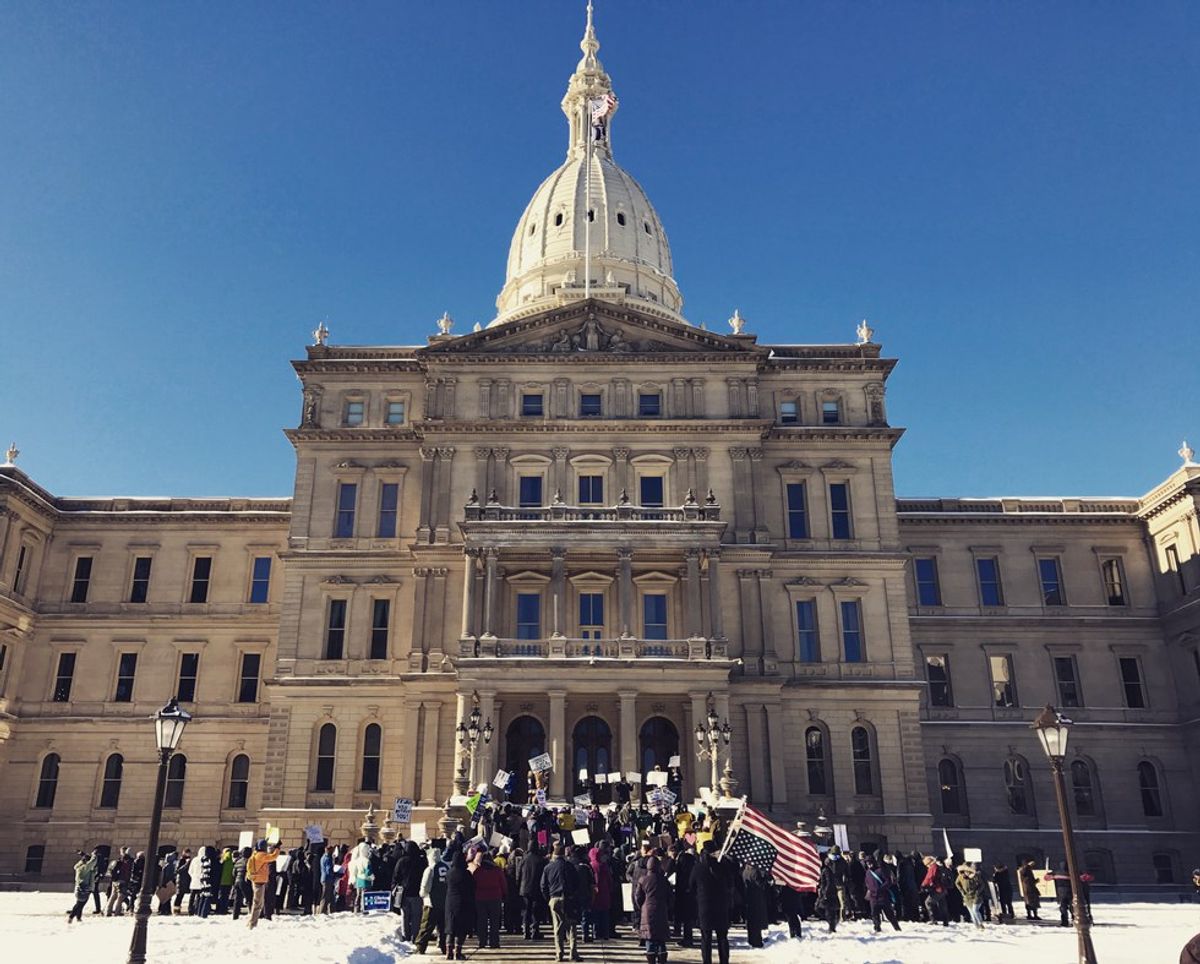 Over the weekend of December 17, 2016, more than 10,000 people across the country gathered in their state capitals to ask their members of the Electoral college vote against Donald Trump.

In Lansing, Michigan, specifically, protesters gathered in front of the capitol building starting at 11 a.m. Numbers varied throughout the day, but between a few dozen and 100 people were present at any given time. Many topics were addressed, such as various human rights issues and the education system. Speakers representing various organizations and causes discussed these issues and their importance in depth while also explaining many people's concerns with the lack of representation of these in our government right now.

What many people don't understand, though, is that these protests were not an act of hate. The people who came together to voice their opinions in Michigan on December 19 were there to show their support and love.

We gathered to discuss how a severe lack of representation of important aspects of life and entire groups of people will negatively impact our country as a whole under Trump's leadership. The most concerning issues, in my opinion, are the blatant hate toward people of the LGBTQ community and people of varying races and religions, the obvious lack of support for women's rights, and the unnecessary reworking of the education system.

After witnessing the Supreme Court recently ruling in June 2015 that said all people can marry whom they love, it's disheartening and frankly disgusting that we as a nation have now taken such a giant leap backward by allowing someone like Donald Trump to become our next president. Our people rejoiced and celebrated when it became known that everyone in our homeland could finally enjoy this right to love and marriage equally. Other countries congratulated us, too.

"I believe in the progress we've made over the last eight years and the Obama administration and I believe that if we live in a Trump administration, even for four years, he could undo potentially undo so much of that progress and I don't want to live in a country where it's unacceptable to be who you are and do what you want to do," said Hannah Tardiff, a political science major at Alma College, when interviewed for this article. "The pursuit of happiness is, I think, a fundamental human right at this point."

As a country, we have shown our true colors by completely ignoring the cries for help from innocent people all over the world and even in our own backyard. Racism and discrimination are very much alive and as strong as ever, and it's a horrible thing to see. The events happening in Syria are enough proof that we just don't care about things unless they directly affect us or they're affecting a generally "white" country like the terrorist attacks in Paris, France.

Think of the women all across our country that are going to be impacted by this election. Aside from the cases about birth control, Planned Parenthood, how women seeking an abortion should be punished, and other aspects of women's healthcare and general rights, Donald Trump has openly and unapologetically harassed and belittled women throughout his entire life. Just the instances during his presidential campaign should have been revolting enough for any civilized and decent human, but apparently they weren't. This man has constantly spoken critically about women's appearances, objectified every woman he has come across, and promoted sexual assault.

"I don't support a president that hates everything that this country was built on," said Megan Finkbeiner, another political science major from Alma College, when interviewed for this article. "He's sexist, he's racist, he's anti-gay and it's not okay for our country to support this... This is our future and this is why we have to get out, we have to be here, because we can't support this type of behavior [from] our president-elect especially, out of our country. It's irresponsible and, quite frankly, disgusting."

And if putting women's rights and their lives in danger isn't quite enough of a reason to speak up, maybe it'll help if we talk about the children. Betsy DeVos, who Trump selected as his Secretary of Education, has singlehandedly ruined the Detroit school system. By bringing in charter schools, the independently-run schools now have the right to deny any child enrollment. Test scores in charter schools like the ones near Grand River and Livernois in Michigan have plummeted and "have been among the lowest in the state" for the past 20 years. What does that mean? It means that those children aren't receiving an adequate education. And that means that we're raising uneducated and misinformed citizens who will eventually be the voice of our country. If older generations are unhappy with millennials now, I can't imagine what will happen in another 10 or 20 years when the results of all of this will be revealed and unavoidable.

We all need to realize that now is not the time to roll over and allow these things to continue happening. Now is the time to show that we are not okay with what's going on and how we're being represented.

Speak out. Share posts on social media. Write letters to your state senators and representatives. Join organizations. Donate to causes you support.

Here are quick links that can help you get started now:

Senate Democrats: Betsy DeVos is not qualified to be secretary of education

Nicole Marie Nigro
Individual Creator
8667
c1.staticflickr.com
Where to start...... Let me start with the cliche that life throws us curveballs and what we do with it is what counts.