a little crazy, a lot of fun 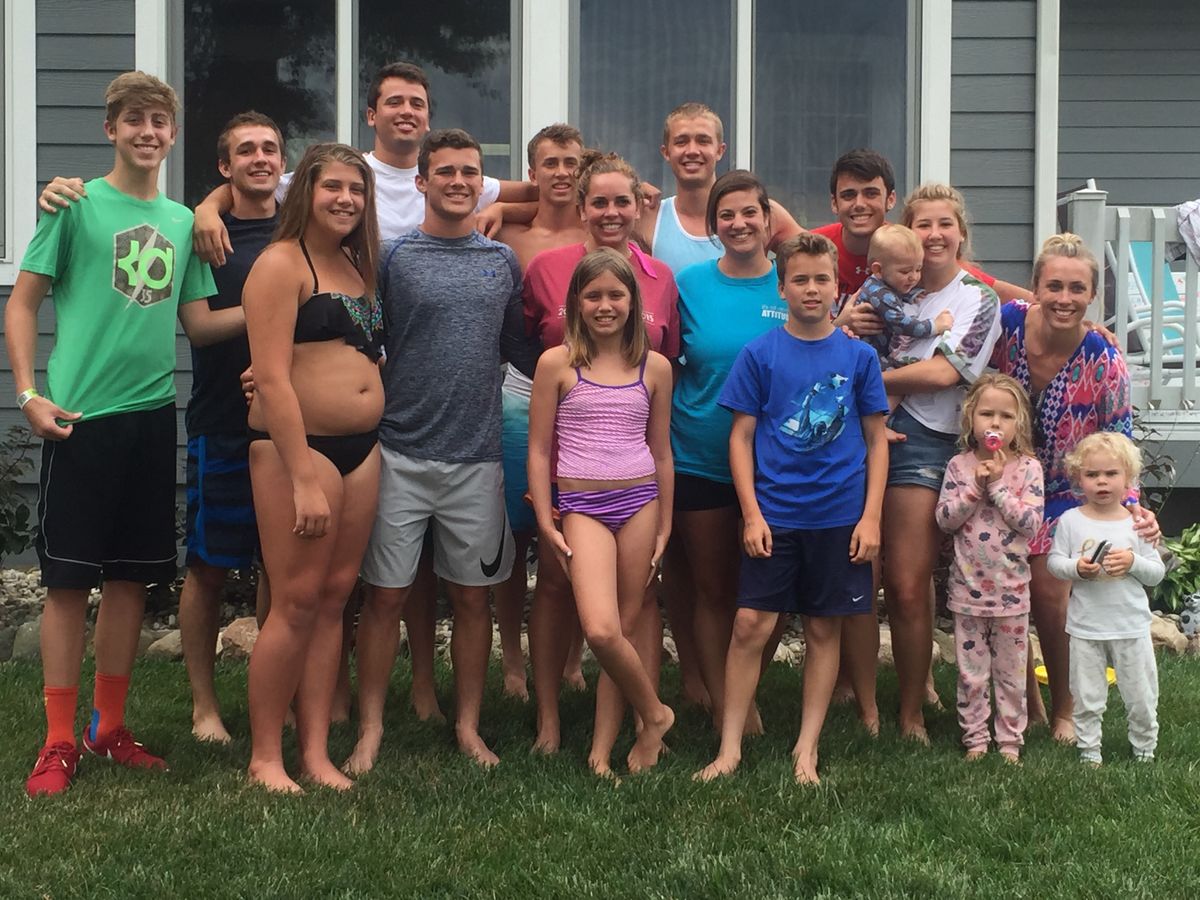 Being a girl from a big family means a lot of things. It means you've probably slept on a lot of floors and couches. You're probably loud and competitive. You look forward to weekends spent with your little brats (did I say brats? I meant cousins) and you're 100% okay with ditching a night out to play board games with your family. Even if you can't cook, you can still cook (it makes sense to us, I promise you) and even if you don't play a certain sport, you're still going to line up when teams get picked.

If one of these girls decides to love you, just know that it's a blessing and a curse- but mostly a blessing. For starters, she's going to drive you nuts. She's used to having a million people around who are doing a million different things. Grandma's in the kitchen cooking with mama, sister's outside with the little ones playing home run derby, dad's trying to round up people for a game, and the list goes on. So when it's just you and her, she'll probably get bored pretty easily. And if she's anything like me, she'll bother you until you entertain her.

She'll make decisions for you. And this one bothers a lot of people. But when you're from a big family, your natural instinct is to protect your loved ones before they even need it. That's usually because with so many people, you can actually see the ripple effect happen. You see how something so minor can impact so many people, and you'll do anything in your power to stop that. But this can be bothersome... obviously. Sometimes she won't even know she's doing it, and sometimes she will but she won't tell you. To a lot of people, it's controlling and a little paranoid. But she's just loving you the way she knows how.

She'll want to talk about literally everything. Big families are known for anything and everything being up for discussion. My family once had a day long discussion (more like argument, but whatever) about whether or not the man should pump the gas (he totally should, by the way). That means that she's going to start conversations out of left field and expect you to actually put effort into your answers. "How was your day" will turn into "what do you think it would be like to be 9 feet tall?" before you know it. And you can answer with "it'd be cool" but she'll chalk you up to being boring. A more acceptable answer would be one like "I mean, you would probably have knee and heart problems, and you would have to duck under doorways wherever you went, and your feet would hang off of the bed... so that would suck. Then again, you could reach literally any shelf. Wait, do you think you could reach the bottom one?"

She's goofy... and probably pretty weird. Personally, I think people bond with laughter. So when a family so large is so close, I like to think it's because they laugh so often. On top of that, if you're going to get any type of attention in a big family, you're gonna have to be weird and loud and goofy as hell. That's just the truth. So Lord only knows what she'll say or do next... and if you take her out in public, just... be careful.

She learned at a young age that the people you love are going to piss you off. They're going to annoy you and sometimes make you pull your hair out. They'll tell you no and won't explain why. They'll make you mad and sad and frustrated and confused, but at the end of the day, they make you. These are the people that shape who you are and who you'll always be, and the reason they irk you so much is because they're changing you. And even if it doesn't feel like it, it's for the better. So you best believe she'll do the same to you. She'll tell you no and not explain it. She'll nag you about getting your work done. She'll push whatever buttons she needs to in order to get you to your full potential.

She probably hates her cell phone. Every family gathering consists of games (and there are no cell phones ever allowed at the gaming table, duh) and usually, big families don't get to see everyone all the time. So those few days a year where everyone can finally be together, no one really wants to be touching their cell phones... not even the pre-teens. And the second they try to touch their cell phone, there will be at least 3 people waiting to scream "put that thing away! if you're bored, let's play a game!" And over time, it kind of just sinks in that we don't get nearly enough time with our loved ones and we don't need cell phones to take away any more of that time.

She'll be hesitant to bring you around her family. It isn't that she's nervous they won't like you, but moreso that they'll tear you apart in the "discussion". What's the "discussion"? I'm glad you asked. When you meet her family, they'll be nice and considerate. They'll ask you about your life, goals, and hobbies. And the second you leave, they'll all gather and pro/con you. Tough, I know. But they're trying to protect her, like they always are.

When I talk about protecting someone, I want to be really clear. I don't mean being possessive or controlling. I don't mean not allowing someone to do things they love or be with someone they love. Being protective means having your guard up for someone else and being ready to react in the best way possible to keep them safe and happy. This is engraved in every big family, and every girl from one. She'll usually let you go about and do whatever you want, but if she thinks someone or something could hurt you, you can bet she'll do everything in her power to prevent it.

She's over-sentimental and sappy, even if she doesn't show it all too often. She'll request pictures constantly and you'll catch her looking at them over and over again for years. And usually, it isn't about the moment itself. It has nothing to do with the event or the place. It's got everything to do with how she felt that day surrounded by those people. So let her. Take pictures obsessively so she doesn't always have to ask. And when she wants to send you a random 4 page text about how lucky she feels, let her.

She'll do the absolute most to support you. Big families are known for being extra. Signs at games, screaming louder than any other family at graduation, driving hours to be somewhere for you, you name it. I remember going to one of my cousin's basketball games this year and there were 13 of us there for him. And it wasn't a chore for any of us. Supporting you is going to be fun for her, so you can expect her to drive hours to watch your game or wake up early to see you get an award for some minor accomplishment.

One of the most important things about girls from big families is that they're loyal beyond measure and without restrictions. Loyalty is hard to come by these days and even when you do, it seems to be shaky. People are loyal until they think they can do better. The thing about coming from a big family is that you never think of people as "better" than one another. Everyone is just different. She would never think of one cousin as "better" than another solely because they're at different points in their lives. The same goes for the man she loves. She'll be more than understanding if you're a little behind your friends. She'll love you for you, and once she does, good luck getting rid of her. Her family has taught her that once you love someone, you just do.

You protect them, you wish the best for them, you care for them, you speak kindly of them, no matter what. Because love, whether it be romantic or familial, isn't about how you feel at that second. It doesn't matter if you're angry or sad or anything else, really. Love is a constant, believe it or not. And to base love off of something as ever-changing as moods is ridiculous. Love is caring for someone more than they care about themselves. Love is about caring for someone in ways they might not understand. It's going out of your way for them and never expecting a single thing in return. And with all of that, comes unwavering loyalty.

I'm sure girls from small families have some of these same qualities, but I can't speak for them. Because I come from a big, loud, obnoxious, irritating, beautiful, loving, goofy, tight-knit family. It's all I've ever known and I feel blessed for it. Life means a great deal more when you have the right people to share it with. I wouldn't trade it for the world, but that's just me.