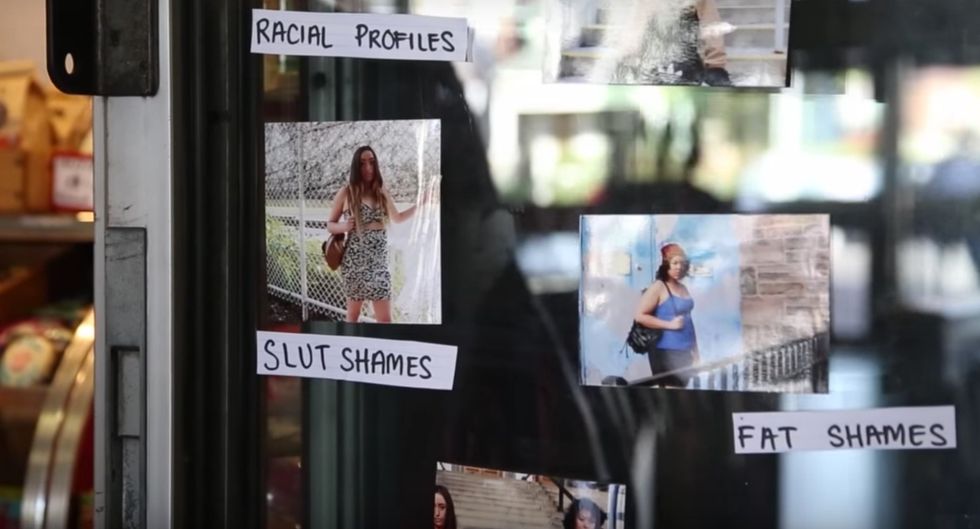 At my high school, the dress code was enforced sporadically. Some girls (and yes, typically just the girls) were called out far more often than others, and some were never disciplined at all. Some teachers enforced the dress code strictly, and some didn't seem to care.

But one thing I witnessed first hand at my school, and something that is being noticed and reported in many others is the fact that there are two types of girls more commonly reprimanded than others: plus size girls, and black girls.

Now, I'm not writing this article to convince you that every high school teacher is some sort of raging fatphobic racist, but there definitely is evidence of prejudice, whether it's purposeful bigotry or a subconscious microaggression. White girls at my high school receive far more leniency when it comes to dress code. From my personal experience, typically, white girls get nothing more than a glance or possibly a verbal warning, while black girls get referrals and suspensions.

Being a plus-size girl isn't exactly a cakewalk, either. When school dress codes use vague language such as "no clothing considered to be scandalous," "revealing," or "inappropriate," it's up to each faculty member to decide what each of those mean. I remember getting a comment from one of my teachers that my running shorts were too short, all while I looked around the classroom to see at least a handful of other girls, all thin, wearing EXACT same shorts as me. Some of these girls even rolled their shorts up to be shorter. another time, I was reprimanded for simply wearing a V-neck T-shirt that showed a bit of my cleavage, specifically when I leaned forward. The top was the same style I'd seen so many other girls wear. This wasn't a revealing shirt, like my teacher said. I'm just a D cup. I've got cleavage in pretty much every top I wear that doesn't come up to my neck, I wasn't trying to be provocative. I was just wearing the same kind of top I'd seen so many other girls wear.

For some reason, a plus-size girl and a thin girl wearing the same thing can clearly be perceived very differently. A plus-size girl can show the same amount of skin as a thin girl, but the plus-size girl's outfit will be viewed as more revealing or scandalous. It took me a really long time to wrap my head around this and figure out why this was the case. I realized that some of my features, perhaps my jiggly thighs, cellulite, or larger chest must've made my dress code infractions more noticeable than other, thinner girls who got away with wearing whatever they wanted. It made me feel like my body was being watched by faculty, like I was being inspected every time I passed a teacher in the hallway or entered a classroom.

Another culprit in this situation is something called "adultification." Black and plus-size girls are often assigned an adult-like sexuality by onlookers, typically before they even reach 18. The Annie E Casey Foundation-funded report "Girlhood Interrupted: The Erasure of Black Girls' Childhood" found that adults often view black girls as "less innocent" than white girls the same age. This leads to harsher treatment by school administration as well as the justice system.

A good friend of mine, Simone, experienced the adultification and mistreatment of black girls firsthand. In middle school, Simone and our friend, Elyssa, who is white, participated in "Twin Day" together. They both wore the exact same outfit, a black and white striped top with a black skirt. While walking side by side in the hallway, Simone was pulled aside by an administrator while Elyssa was allowed to continue on her way to class. Simone, who was wearing the exact same outfit as Elyssa, was told that her outfit was inappropriate and harshly reprimanded. She was told she should know better than to "dress like that." She was told that she needs to set a better example for her peers.

But why was Simone being treated as if she was purposely trying to be provocative?

Because of her race.

Why was it assumed that she “knew better" but the same wasn't assumed for Elyssa?

Because of her race.

Plus-size girls are also victims of adultification, typically because of physical assets. Towards the end of middle school, I remember that I appeared to develop breasts and hips far before my thinner classmates, and I was treated differently because of it. Once, when I had just turned 14, I was aggressively hit on by a much older man at a family friend's birthday party. I quickly told him my age. He tried to play it off like he couldn't tell how young I was.

"Really?" he said, scanning my body with his eyes as he spoke. "You look WAY older than that. I would've guessed you were 20!"

But he knew. There's no way he didn't. I still had braces, (with those obnoxious, neon-colored bands) I had just shown up alongside my mother, and I was standing by the "kids table" with all the other children and pre-teens who had been brought along by their parents. But because I had wider hips and larger breasts than the other girls my age, I stood out. He noticed me, and saw past the obvious indications of my age and perceived me as older because of my body.

This is the same way school administration singles out plus size girls. because their physical traits are literally just BIGGER than other girls, they're more likely to be called out for wearing "provocative" clothing, while another, thinner girl in the same outfit would fly under the radar.

While dress codes present a multitude of issues for all girls and are an outdated concept, there a definitely a few extra hardships they create for black and plus size girls. It's unfortunate and unfair that anyone should receive any sort of negative treatment based on the way they look, yet that's something we see far too often in this country, even in middle and high schools.