The Spider Gates, A Local Legend

The Spider Gates, A Local Legend

The spooky story behind this hometown horror. 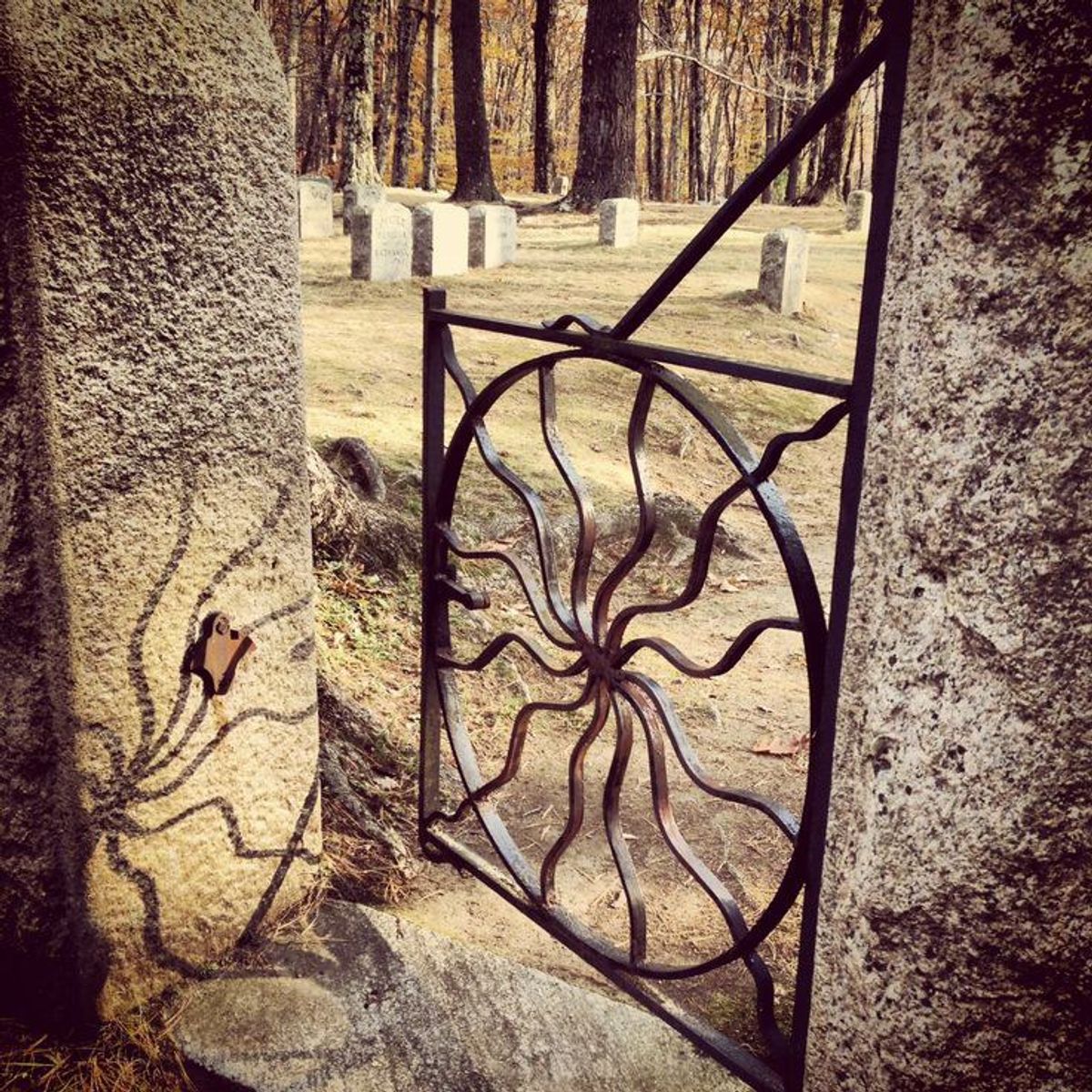 It seems every town has it's own collection of local myths and ghost stories passed down from generations. Whether it is a haunting, murder story or some type of freakish creature, no matter what town or city you go into you will always be able to find someone with a story. With Halloween quickly approaching, I've decided to share the most famous local legend of my city; a place where I have been and witnessed strange things that would leave the biggest of skeptics confused.

My hometown horror is a place that goes by the name of "Spider Gates," also referred to as the “Eighth Gate of Hell.” Spider Gates is a privately owned Quaker Cemetery on the boarders of Worcester and Leicester, Massachusetts. The actual name for the graveyard is “Friends Cemetery,” but the nickname “Spider Gates” was given by locals because of the spider web shaped design of the iron entrance gates. This gate has been known as the eighth gate to hell, but many locals have not gotten a clear answer why. There are two stories which have been told the most, but no one is positive where they started or what one is true.

Some say that besides the main entrance, Spider Gates has seven other secret entrances and once one passes through all seven, the eighth will lead them into hell. Others however, say that there are eight gates to hell in the country, and spider gates is considered the final gate. Regardless of what you believe, there are many sights inside the gate that will make you want to turn back and run to your car.

Take some time to close your eyes and imagine taking a trip to this haunted cemetery.

Late at night, you and your friends drive down the eerie dirt road named “Earle Street” after the locally famous Marmaduke Earle. Leading into spider gates, completely dark as the only lights in the area are the headlights from the car. Pull over to the side of the road and begin to get out of the car. Spider Gates is hidden in the woods which means you will need to leave your car and begin your journey into the woods on foot. Your first goal is to actually find the cemetery, hidden in the wooded area of Leicester. Once you find your way through the brush, you will notice a dirt path that leads you straight to the iron “spider” gates. Pay careful attention to the gates. It is rumored that there is an eight foot tall gate keeper that looks over the cemetery. If he believes you are there for a good purpose, the gates will be open. However, if he believes you are there to do harm to the graves, the gates will be shut and you will be forced to climb over the stone wall.

Once inside you will notice a large oak tree to the left of the gate. Some locals say they occasionally see a rope hanging from a branch of the tree, however, others say they have never seen a rope. Although there is no evidence of a hanging, one local recalls seeing a story in the paper written in the 70’s of one that had happened a little over a half mile from the cemetery.

Next to this tree, you see a raised section of the area, with no sign of grass growing known as the “altar." In this area there is a granite post in each corner, but there are no graves. This was formally the location of the old Quaker Meeting House. Now, it is rumored to be the location of many rituals performed by mediums, satanists and or even anyone who wants to get in contact with the spirits whose bodies are buried in the graveyard. Rumors of murders, rituals and hauntings all happen on this very ground in which you stand on.

You keep going, still not frightened off by the chilling sight of the “hanging tree” or the “altar.” However your journey has just begun. As you keep walking you noticed a grave with coins on it, and once again no grass growing around it. This is the sight of “Marmaduke Earle”. That name should sound familiar because he is the man the street you parked your car on is named after. Marmaduke is most famously known for talking from his grave. The coins are symbolically left there as his grave is known as the “payphone” of the cemetery. You begin to walk around his grave, say his name 10 times and press your head against his gravestone. Make sure you leave some change, and you will hear him talk to you from his grave. For your own sake he will whisper to you to leave, but you continue to ignore him, and walk further into the graveyard.

You begin to hear water flowing as you walk toward the back of the cemetery. You notice a small stream flowing on the other side of the stone wall. You go over and see nothing but the stream and more coins left over on other gravestones. This stream however, is not what it appears to be. Rumored to be the actual River Styx, this river could be one of the sights that takes you to hell. Studying Greek Mythology in high school, this would explain the extra coins leftover at the gravesite. As the mythology goes, you have to pay the ferryman once you enter the River Styx. You leave some coins on the gravestones, waiting for an encounter with the supernatural.

Maybe nothing happens. Maybe you are one of the lucky few that have visited all of the haunted points of Spider Gates without any backlash. However, most people are not as lucky as you. Reported hauntings, screams apparitions and orbs have highlighted the horror of Spider Gates. You walk back up the wooded area to your car, which remained parked on the dirt road. You put the keys in the ignition hoping it starts, as others have reported car batteries draining when parked on the side of the road. It starts up fine and you drive back into the main city of Worcester. You have escaped Spider Gates.

Be careful, because next time you might not be as lucky.