What Your Hogwarts House Says About You
Odyssey
CurrentlySwoonLifestyleHealth & WellnessStudent LifeContent InspirationEntertainmentPolitics and ActivismSportsAdulting
About usAdvertiseTermsPrivacyDMCAContact us
® 2023 ODYSSEY
Welcome back
Sign in to comment to your favorite stories, participate in your community and interact with your friends
or
LOG IN WITH FACEBOOK
No account? Create one
Start writing a post
Entertainment

Get yourself sorted and find out where you belong in the world of witchcraft and wizardry. 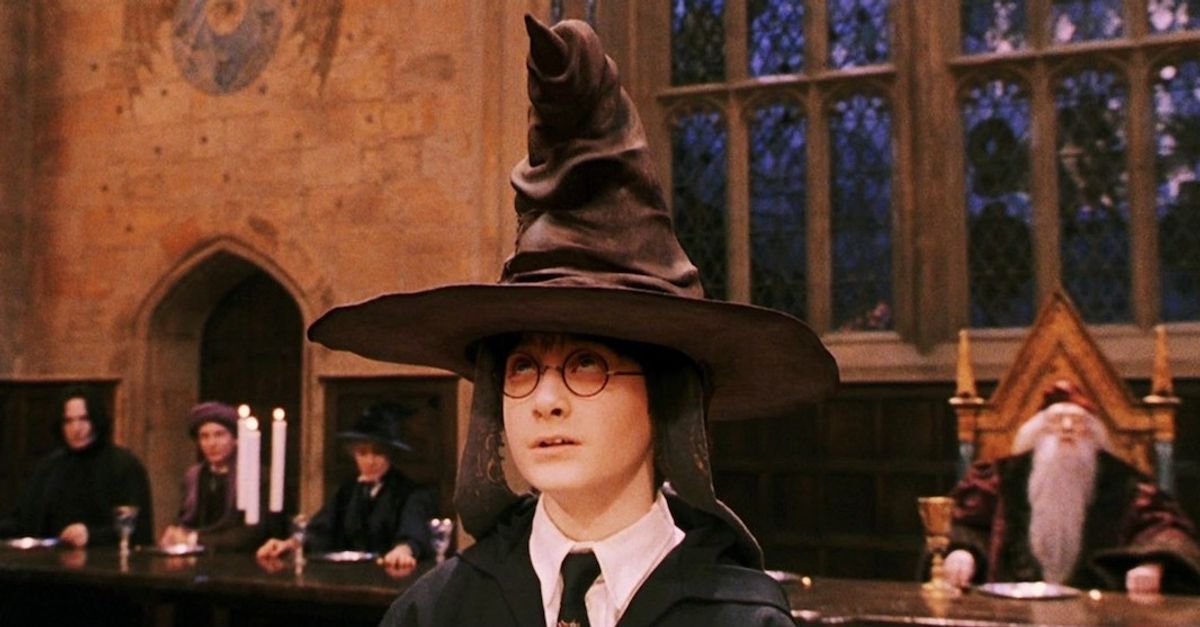 Sorting at Hogwarts is a big deal.

Being sorted into a house is essentially being placed into a family while you are away from home learning about witchcraft and wizardry. Your house is made up of the people you will live with, go to classes with, play Quidditch with, and everything in between. You basically spend 24/7 with them. Your Hogwarts house is your home away from home.

When you get sorted into a house, it is based on your personality traits. The people in your house are typically like-minded people who display the same characteristics as you.

When you're a first year at Hogwarts, the minute you set foot in the castle you are swept into the Great Hall to have the ancient Sorting Hat placed on your head. This Sorting Hat decides which “family" you'll be spending your seven years with.

For some, it is very obvious which house they will be in, due to certain personality traits they possess. For others, they may exemplify traits that fit a multitude of houses and are uncertain where they may end up.

To find out where you belong, you can take the official Harry Potter Sorting Hat quiz at Pottermore.com. For all you muggles out there, these are the characteristics that the houses possess and what your house says about you:

Gryffindor: The house of the brave, loyal, courageous, adventurous, daring, and chivalrous. Those who stand up for others are typically Gryffindors. Brave-hearted is the most well-known Gryffindor characteristic, and Gryffindors are also known for having a lot of nerve.

Gryffindors are people who hold a multitude of qualities alongside the ones listed, making them a very well-rounded house. People who are Gryffindors are often people who could fit nicely into another house but choose to tell the sorting hat they want Gryffindor (there's that bravery). "Do what is right" is the motto Gryffindors go by.

Being a Gryffindor means that you're probably an adventurous and courageous friend, and you are usually known for doing what is right.

Ravenclaw: The house is known for their wisdom, intelligence, creativity, cleverness, and knowledge. Those who value brains over brawn can be found here. Ravenclaws often tend to be quite quirky as well. "Do what is wise" is the motto they strive to follow.

Though Ravenclaws can be know-it-alls sometimes, they most likely do know what the wisest decision is.

If you are known for being the quirky friend, the smartest in the group or just great at making wise decisions, you're definitely a Ravenclaw.

Hufflepuff: This house values hard work, dedication, fair play, patience, and loyalty. Hufflepuff's are known for being just and true. "Do what is nice" is their motto.

Hufflepuff is known as the “nice house" and believes strongly in sparing people's feelings and being kind. This is not to say that Hufflepuffs aren't smart or courageous. Hufflepuffs just enjoy making others happy and tend to be more patient toward people.

If you ever find that you are too nice for your own good and cannot bear to hurt someone's feelings, congratulations, you are a Hufflepuff.

Slytherin: This is the house of the cunning, prideful, resourceful, ambitious, intelligent, and determined. Slytherin's love to be in charge and crave leadership. "Do what is necessary" is the motto of this house.

Slytherin is a fairly well-rounded house, similar to the other houses. They are loyal to those that are loyal to them just as Gryffindors are and are intelligent as Ravenclaws.

Slytherin house as a whole is not evil, despite how many dark wizards come out of this house. That is merely based on the choices of those wizards (so if your friend is a Slytherin, don't judge, it doesn't mean they are mean people). Slytherins do, however, have a tendency to be arrogant or prideful. This is most likely due to the fact that everyone in Slytherin is exceedingly proud to be there.

What Hogwarts house you're in says a lot about the person you are, the traits you possess and how you may act in some situations.

But in the end, your house is really just your home that is always there for you. Always.