Or: An overview of a game that is played with knives on your feet. 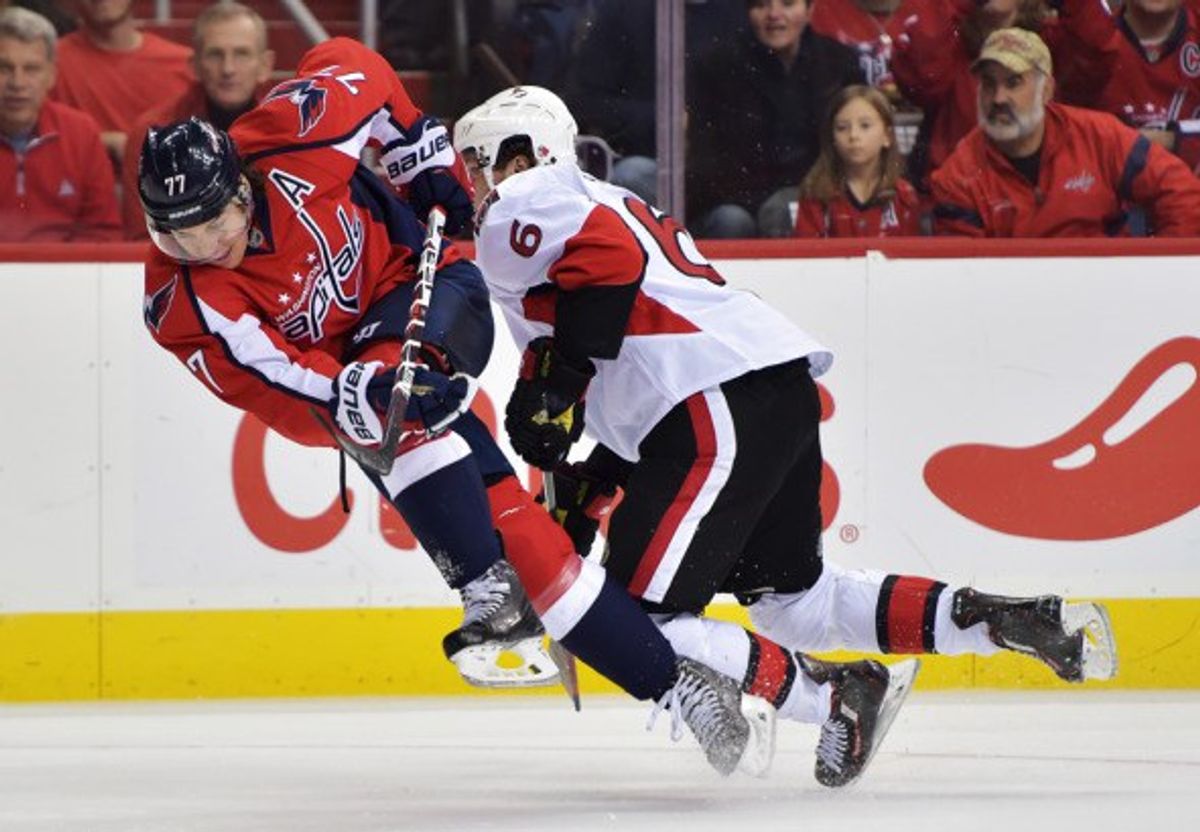 I really, really like hockey. Probably to an unhealthy degree, particularly when my team of choice, the Washington Capitals, are doing so well this season. Like, so, so well. I'm kind of freaking out about it. However, I wasn’t always this way, throwing around fancy terms like Corsi/Fenwick percentages, sitting atop a most definitely literal throne of skates and sticks. What is a Corsi/Fenwick percentage? Who knows. Doesn’t matter. If you want to learn a little bit about hockey, or at least sound like you know a little bit about hockey when everyone’s screaming at the tv, keep reading. You too, will learn to yell enthusiastically at a bunch of men running around with knives attached to your feet!

So there are a lot of different leagues in hockey, actually- but they don’t matter to most people so we’re going to ignore them. Sorry, AHL. The league we’re focused on which has games that are the easiest to see is the NHL (National Hockey League). Duh. NHL has 30 teams in four different divisions, which doesn't really affect you but it's interesting to know anyway.

How do you know which team to root for? Well, picking the team in your hometown or closest to your hometown is a generally accepted strategy. Don’t like the team that is nearest you (I’m looking at you, New York Rangers, no one likes you)? Find the team with an elite player who does cool stuff on ice- like Sidney Crosby, my son, who plays on the Pittsburgh Penguins, or Zdeno Chara, who plays for the Boston Bruins, has a cool name, and is also like 12 million feet tall, which is also pretty cool. If that doesn’t float your boat, just pick the player who you think is best-looking and root for them. I’m not gonna judge you. I have a Tom Wilson jersey. It’s fine. I'm not ashamed.

Okay, but how does it work?

Ice hockey–not to be confused with field hockey, which is played on fields–is played on ice in a rink. It's weird, but true. The only point of the game is to put the puck in the goal. That’s it. What makes it fun is everyone is running around with knives on their feet hitting each other and trash-talking the entire time. Like, all the time. It doesn’t stop. There’s five players on a team with a goalie, so that’s six players overall. That’s important, as sometimes near the end of games for whatever unholy reason they’ll pull the goalie, and put in six players on the ice, and you will hate it. It’s awful. You will probably cry, and hate it. So, five players and a goalie usually, so about ten guys skating around at any given moment, all trying to put a piece of rubber- sometimes called a biscuit, for whatever reason, but it’s funny- into the goal.

Okay, so what should I be yelling at the screen?

Good question! When your preferred team- whether home town, good looking, or otherwise- scores, cheering is generally a good idea. But you want to be more involved in that, right? Of course you do, you're very invested in this. I would recommend yelling at penalties. Some common penalties in ice hockey:

Boarding: Shoving a dude really, really, hard into the boards (the walls around the ice rink) for no good reason. However, don’t confuse this with checking, which is totally allowed and awesome. Checking is also pushing a dude into the boards, but it’s generally to try and get the puck or keep the dude in question from getting the puck.

Charging: Running at a dude to throw him into the boards. If you built up speed- i.e. more than three strides- to check a dude, it’s charging.

High Sticking: They brought the stick up really high and smacked somebody with it. Don’t do this. This is a good one to get angry about though, so if you see someone get smacked in the face with a stick, feel free to yell.

Spearing: Using your stick like a spear. Don’t jab people.

Slashing: Don’t use your stick like a sword, either. That’s dumb.

Tripping: Dude, don’t trip people. This is a great one to yell about, because it’s kind of hard to tell sometimes, or the ref will miss it, so depending on how blatant is one the levels of your anger/incredulity will vary.

Fighting: My personal favorite. If they take their gloves off, it’s fighting. If they keep their gloves on, it’s roughing. Either way, it’s fun to watch, especially when goalies fight. It’s like two T-rexes trying to punch either other. It’s great. Like gladiators for the modern man.

Anything else I should know?

When your team gets penalized, groan. When the other team gets penalized, it serves them damn right. Scoring is very exciting, and you have to protect the goalkeeper because they are precious and very good at their job. Teams will go up in arms and fight everyone for slights against the goalie. It’s a thing.

Pick a team, maybe a player or two to watch, and get ready: playoffs are coming up and it’s going to be a fun time for all of us! Remember, though there’s no crying in baseball, crying in hockey is accepted and expected. Have fun!