My high school led a walk out. Here's why that's important. 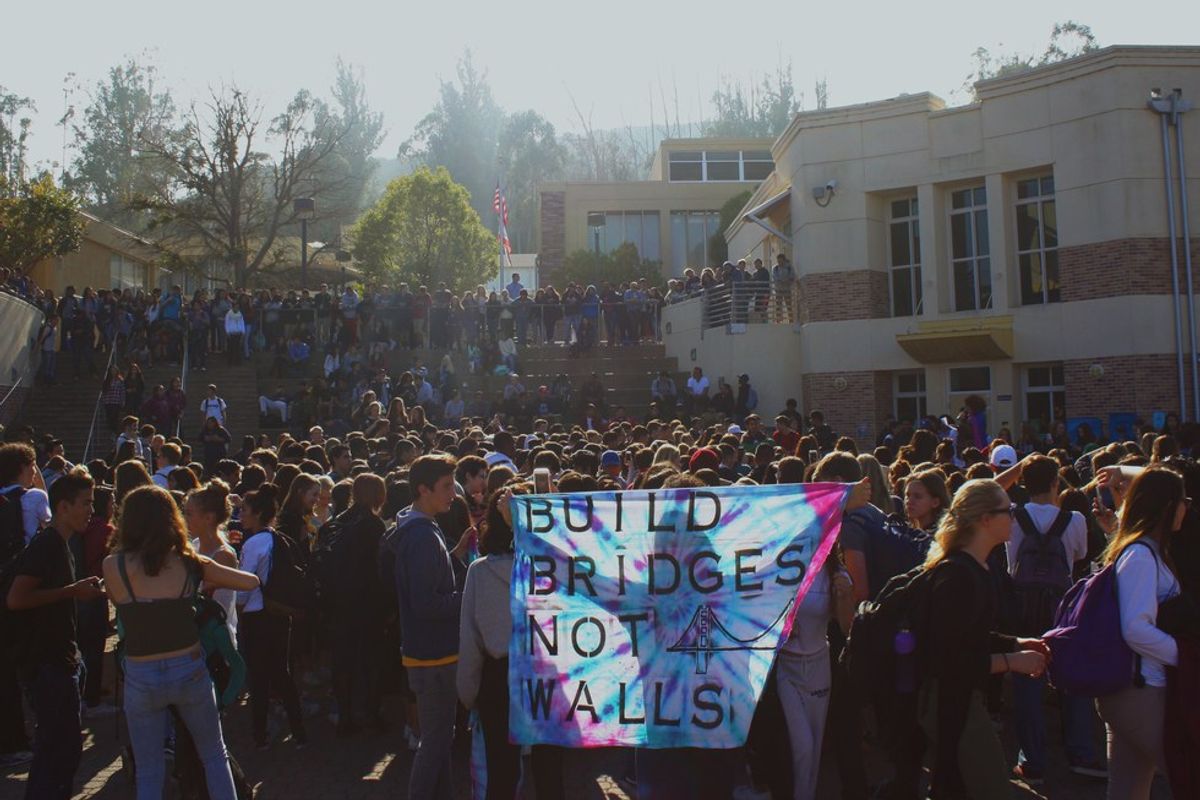 Earlier this week, my former high school held a walk-out. Students gathered in our main quad, participating in chants with the essential message of spreading love. Complete with posters and music, this event allowed people who have felt marginalized, endangered, or otherwise disheartened by this election to voice their opinions surrounded by crowds of cheering peers.

Criticisms of this event regard its convenience: It is convenient for a bubble of diverse Bay Area students to protest within themselves for causes for which they, for the most part, all feel strongly about. I completely agree with this argument; however I contend its relevance.

Walkouts as this one are not only in response to the election’s results, but the reason for the results. There is no doubt in my mind that third party candidates, low voter turnout, the clusterf*ck of an electoral college, amongst other factors affected the outcome of this election. However, these aforementioned issues didn’t just appear out of thin air; every candidate has dealt with them. The true core reason for the outcome of this election is our current prevailing culture in America: one of unacceptance and hatred.

I concede that by the popular vote, Hillary Clinton would have won. I counter this statement with the statistics of the popular vote: Hillary, with 47.9% of the votes, and the Donald, with 47.1%. That means that there are still some 60 million people, just in the voting body, that support Donald Trump. Furthermore, there are 60 million people in this election’s voting body that resonate with his ideals, or feel that while they are questionable, are trivial enough to ignore and still cast a vote his way. In a Thanksgiving dinner analogy, the former is analogous to drunk Grandpa Joe explaining why abortions should be illegal as he stuffs his face with mashed potatoes, and the latter is analogous to Aunt Jane keeping her mouth shut as she constantly repeats to herself, “I love him anyway.”

And frankly, the Aunt Jane’s of our world are just as dangerous as the Grandpa Joe’s. I understand the desire to keep relative peace, whether at the dinner table, or in the break room, or at the gas station. But perhaps it’s the college student in me, contentious and stubborn, that insists on living by the Desmond Tutu mantra: “To be silent is to choose the side of the oppressor.” By not saying anything, Aunt Jane provides to her relatives the silent consent to continue shitting on everything she stands for. Now, more than ever, we can’t let the small comments slide, because they contribute to the insidious culture that which weaves through the establishing fabric of the silent majority. Not all of us have the ability, nor the privilege, to be able to say “Grandpa Joe, actually...” But when we do, we better use it.

So I commend my former peers for gathering together, and for making each other feel unified in a place that should feel like home. It is not until they feel supported within their own communities that they can truly feel that they have the power to effect large-scale change. Yes, I agree that the walk-out was convenient. It would have been much more difficult, if even possible, for these students to carry out the same event in Alabama, or Texas, or Indiana. But the event should have been convenient. People should feel okay to express their anger at the happenings of this election, and translate it into a message that we need love more than ever. Creating safe spaces like the one my peers have made, a safety net of hundreds of students, is incredibly important.

Recognize the privilege we have of being able to make safe spaces, whether on social media, at school, in our homes... And fully internalize just how important that privilege is to you, as motivation to help build safe spaces for everyone. I fully understand that this language makes me sound like a granola-in-a-mason-jar, Tevas-and-mom-jeans hippy. But the message of sending love, especially in a time like this when there is a prevailing culture of hate, is absolutely necessary.