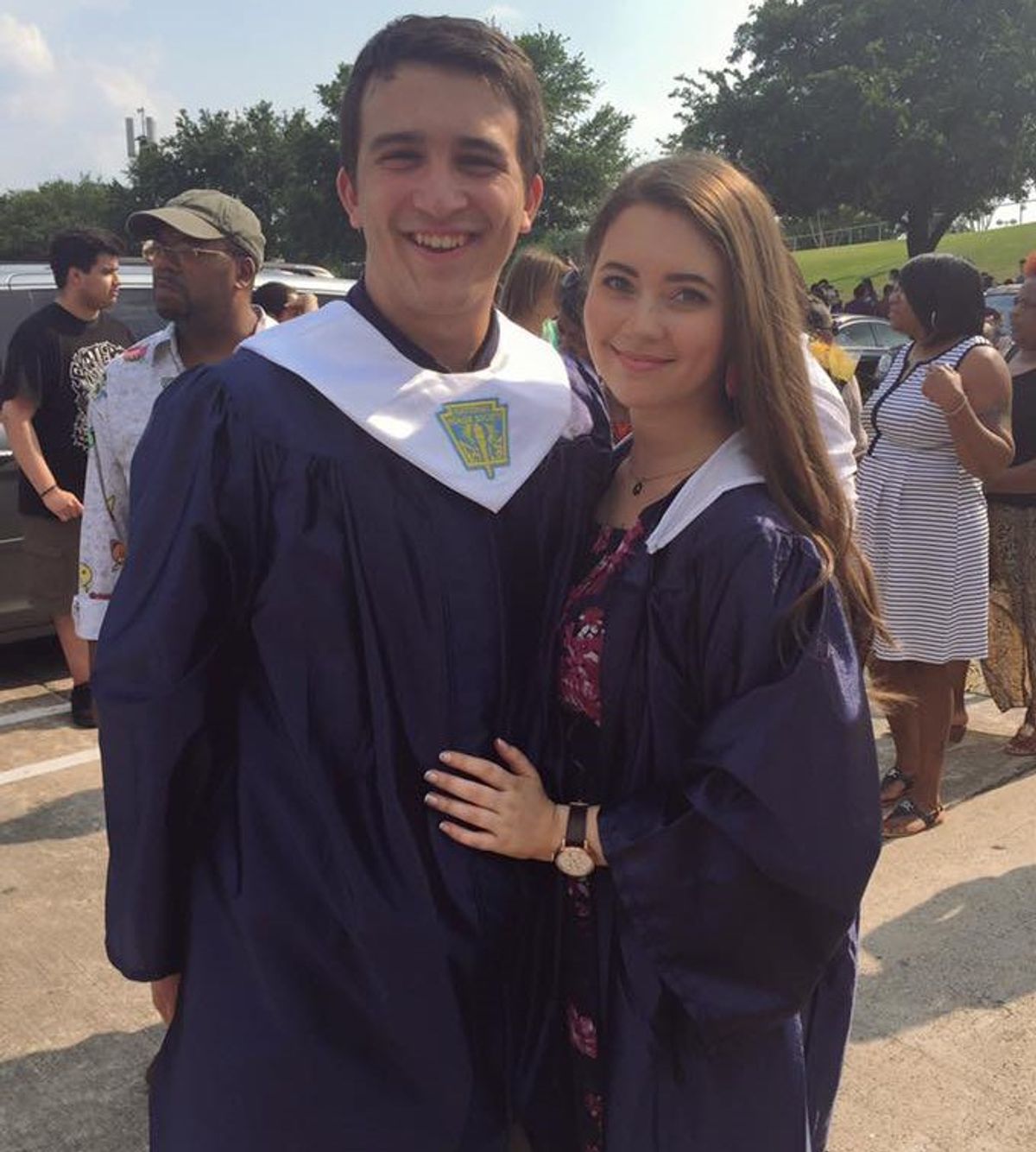 The night before my first college move-in day, I was anxious beyond belief. I had no idea if I would like my roommates, my unseen apartment or how I was going to handle being away from my best friends and family. But the one person I wasn't anxious about leaving behind was my boyfriend. Not because I had a lack of one, but because my high school boyfriend and I were attending the same college and I was beyond excited to experience my newfound freedom alongside my partner in crime. But college can really change a relationship.

Going into freshman year, I had all of these ideas of what my relationship was going to be like. I thought we would study together, visit our hometown together and be exponentially happy. Some experiences were just like I thought, and others weren't what I expected to happen, but have shaped our relationship into what it is today.

A couple studying together in a bedroom with a closed door? Bad idea. Now, I'm not talking about anything remotely intimate happening, I'm talking about being the two most distracting people when we're together. We go to a small school, so it wasn't too surprising that we'd both ended up in the same mass communications class without planning it, but we did plan to do papers and study together.

Well, we would start out really well, he'd sit on his bed and I'd sit at his desk, we'd crack our knuckles, break out our laptops and take turns flipping through our shared textbook. But 10 minutes into writing, I'd complain that I'm hungry and need food to continue working. So we'd put on our shoes, get in his car and return 20 minutes later with two burrito bowls from Chipotle (sometimes we'd even have chips and guac if we felt like splurging). OK, great, now I can focus.

After 30 minutes of silent chewing and typing, his roommates would start banging on his door, demanding that he see a video on YouTube about body builders. After 10 minutes of that, he'd come back to his room and find me laying on his bed watching "The Office" because I needed a break. Before you know it, we've watched two episodes, it's 1 a.m. and my roommate is calling me, wondering where I am. So my advice would be if you're going to do homework together, go to the library, so you're not distracted and not too comfortable.

Hometown visits were actually my favorite part about dating my high school boyfriend in college. He'd throw his soccer duffel bag in his car and drive to my apartment to help me bring down my suitcase and laundry basket. We'd go to the sketchiest and cheapest gas station right by our school, and make our way back to Houston. These three-and-a-half hour car rides were the best things about going home because my boyfriend drives a 2001 Mercedes e320, which has no CD player or aux cord. The radio and our cell service would cut out after going through the tiny city of Trinity, so we were forced to talk to each other. And usually, these talks would list the things we had to do while home.

There's a really good Chinese restaurant called Hong Kong, which is always the first thing on our agenda to do. And after that, I always insist on going to Pundt Park to get lost in the woods while my boyfriend tries to scare me into thinking there's something following us. And when you date a soccer player that was captain of a high school soccer team for two years, watching a high school game or two is also a necessity.

Now, here comes the not-so-expected part that college did to our relationship: ruined it. But only for a little bit. I was overwhelmed at the time, and had some not-so-good friends that tried their best to convince me to leave my boyfriend, and that I was too unhappy to be in the relationship anymore. And while it's true that I was unhappy, I don't think my misery was my own idea. It was a fight that had been blown out of proportion with too many audience members. Now I look back on it, the next couple months were mostly avoidable, but they did teach me a lot more than I'd thought I could gain from a breakup.

Although what happened between us was personal, and something I don't wish to delve into. I can say that I blame my expectations going into college and his careless attitude. In high school we were incredibly happy, and we were that couple that had been dating forever that everyone expected to stay together. I expected things to stay simple, without worrying about his life-altering injury that happened his first soccer college game. I thought I would be a priority in his life still, when I no longer was.

As the boy across the hall told me one October evening, "You deserve better." And I believed him. That was the final comment I'd wanted to hear about my failing relationship, so I left him, and the next month was absolute and total shit. We were careless and harsh. I avoided going to the class we had together for three weeks, and he did the same. We only spoke to argue, and I thought that was really the end of the relationship.

But when I went home for Thanksgiving, I realized these things that had bothered me so much for the past month were no longer bothering me. We started hanging out again, and I spent Thanksgiving dinner with his family. I realized we weren't the issue. Well, at least, not entirely. My initial reason for wanting to break up is still something I think about often, because he hurt me and I never really got over it. But the boy across the hall and the absolutely terrible friends never actually tried to help.

My advice to anyone continuing their high school relationship would be to figure out if this is what you want, but don't let other people make that decision for you. It sounds easy, but when you're hurt, you tend to look for the easiest solution, and when has that ever been the best solution? Go into college with an open mind and expect nothing! The best memories are often unplanned.

Emmaline B
The Narrative
21663
https://unsplash.com/photos/O0T1SIgHAfM