How her origins teach us a life lesson. 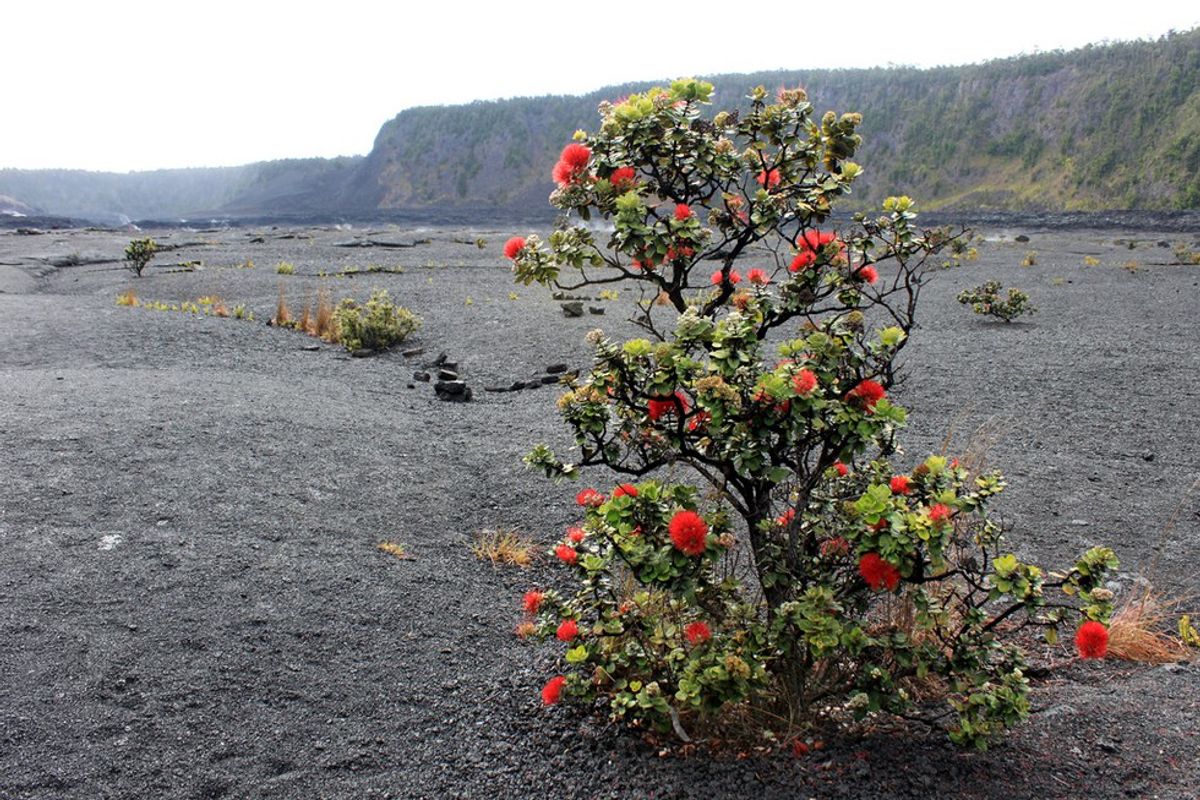 Legend says that long ago, the Hawaiian Fire Goddess, creator of islands, Pele, fell in love with a handsome warrior named Ohia. But when she asked him to marry her, he refused, for he was already in love with another: Lehua. In a fit of rage, Pele transformed Ohia into a twisted tree and left him there to rot. Lehua was devastated and begged the other gods to intervene. In the end, they transformed her into a beautiful red flower atop Ohia’s branches, so that they could be together for all eternity.

Of course, that’s just a fairy tale. Here is the (romanticized) scientific version:

Millions of years ago, thousands of seeds were carried across the Pacific Ocean and deposited on the chain of islands we now call Hawai’i. But they encountered a land not made of soil, but cooling lava. It was a desolate, barren land, where no form of life was able to thrive before. Its unique geography made it difficult for plants to take root. The Ohia Lehua was the first to figure out how to adapt and survive.

After their long journey across the ocean, seeds settled into the cracks within the lifeless volcanic rock. Although they found no soil, they were able to extend their roots deep into the heart of the islands. Each source produces masses of thin tentacles reaching deeper and deeper into the depths of their new home, searching blindly for a way to survive. At last, they succeeded. For deep under the surface of the islands were tunnels, created long ago by rushing rivers of hot lava, now cooled. And these tunnels were moist with water. The Ohia Lehua was able to drink in this water from the underground tunnels and survive, eventually evolving many different varieties.

I think we can all learn a little something from this special flowering plant. Clearly, she is a survivor. She found a way to thrive in the roughest, most inhospitable environment in the world. The Ohia Lehua was different. She played to her strengths. She went around the traditional laws of nature and her kind without breaking them. She wasn’t afraid to stray from the norm. And in doing so, she not only flourished her own self but helped give birth to an entire new world. For it is because of the Ohia Lehua that the Hawaiian Islands now teem with life. Before her, they were dead. No, not even dead, for you must know life to know death. They knew only darkness and fire. They knew only destruction and ruin. But then the Ohia Lehua breathed life into them, and together they built a new world. She was a different kind of fire. Her fire had spirit. And her spirit changed their world.

Nicole Marie Nigro
Individual Creator
9248
c1.staticflickr.com
Where to start...... Let me start with the cliche that life throws us curveballs and what we do with it is what counts.