The Happiest Season Might Be The Best New Christmas Movie

The Happiest Season Might Be The Best New Christmas Movie

The first Christmas film featuring a lesbian couple as protagonists is available on Hulu now. 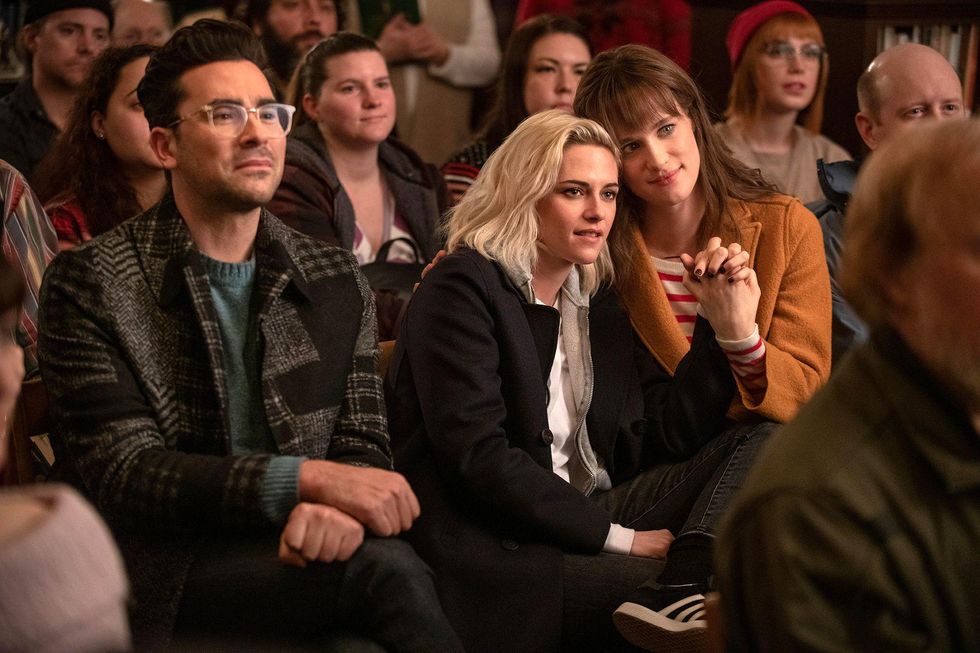 Kristen Stewart and Mackenzie Davis star in Hulu's new Christmas movie, "Happiest Season" as Abby and Harper. They are very clearly in love and ready to commit-- in the first couple scenes we see Abby purchasing an engagement ring for Harper. The plan at first is for Harper to go home for Christmas without Abby, but when she asks Abby to join her, her girlfriend excitedly agrees. But as the couple is on their way to Harper's parents, she reveals an interesting piece of information.

She hasn't come out to her family yet, and she told them that Abby is her straight, orphan friend.

Seeing as they're already on their way to the house, Abby can't exactly turn back now. After taking some time to process the information, she respects Harper's decision to keep her sexuality and their relationship a secret for now. The women find themselves in plenty of awkward, goofy situations while trying to hide their relationship. It's both hilarious and endearing to watch, but as the movie goes on there are more concerning obstacles that present themselves. One of them being Harper's hometown ex-boyfriend. Abby begins to feel more and more excluded from Harper and her family as the film progresses, but she finds solace in a new friend: Riley, who's family is close with Harper's and who happens to have been Harper's first girlfriend in High School. She reveals to Abby that In high school, they kept their relationship a secret just as Abby and Harper are doing now. When someone ultimately found proof of the relationship, Harper outed Riley and claimed that the relationship was one-sided.

While Harper can't be blamed for the person she was in High School, we see a similar pattern of behavior unfold between her and Abby. This time, however, Harper fixes things before Abby can get away. When her sister outs her to her entire family, she first panics and denies everything. After Abby, who was already fed up with the way she was being treated, hears this she runs off. Harper catches up just in time and vows that Abby is the only one she really cares about. The women make up, get engaged, and are accepted by Harper's family.

This movie is one of, if not the, first Christmas movie with an LGBTQ couple as the main characters. It's certainly the first one I've seen. With the starpower behind Kristen Stewart, Mackenzie Davis, and their co-stars Aubrey Plaza and Daniel Levy, this movie was set up for success. It's already been mostly embraced by the LGBTQ community. It's a heart-warming story and one that we can all relate to on some level. Of course, as with any movie, it isn't without criticism.

One of the main characters, Harper, has been accused of being toxic throughout the film. This has been an opinion shared by many, some even LGBTQ themselves. While I agree that Harper wasn't the perfect girlfriend for most of the movie, it's unfair to judge her for not wanting to come out to her family. Everyone has a different journey, and Harper ultimately being outed had to be traumatic. No one should be pressured to come out before they are ready. Criticizing Harper for her lack of consideration for Abby in spending all night with her boyfriend, pushing her aside, and making her feel excluded is valid. However, criticism involving her decision to come out or not come out seems counter productive to me.

Another major concern with the film, which I agree with, its whiteness. While queer representation is getting better, there isn't much diversity in terms of race and ethnicity. Both Harper and Abby are white, and so are most of their friends and family. Inclusivity in Hollywood isn't a new problem by any means. Movies featuring heterosexual couples are typically white as well. But just because a movie is queer doesn't mean that it doesn't need to also have representation for people of color. By excluding them from the narrative, we are only further dividing the community and limiting representation to the white people in the LGBTQ community--which isn't fair at all.

Despite it not being perfect, this movie was a great step in the right direction. I'd love to see more movies featuring two women in a relationship. These stories need to be told, and LGBTQ youth deserve these cheesy romantic movies that have exclusively told straight love stories for so long.

Happiest Season is a treasure in the year of 2020, and definitely made my season a little bit happier.