The Hippodrome Brings Tony-nominated "Hand To God" to Gainesville
Odyssey

The Hippodrome Brings Tony-nominated "Hand To God" to Gainesville

This Is Not Your Pastor's Puppet Show! 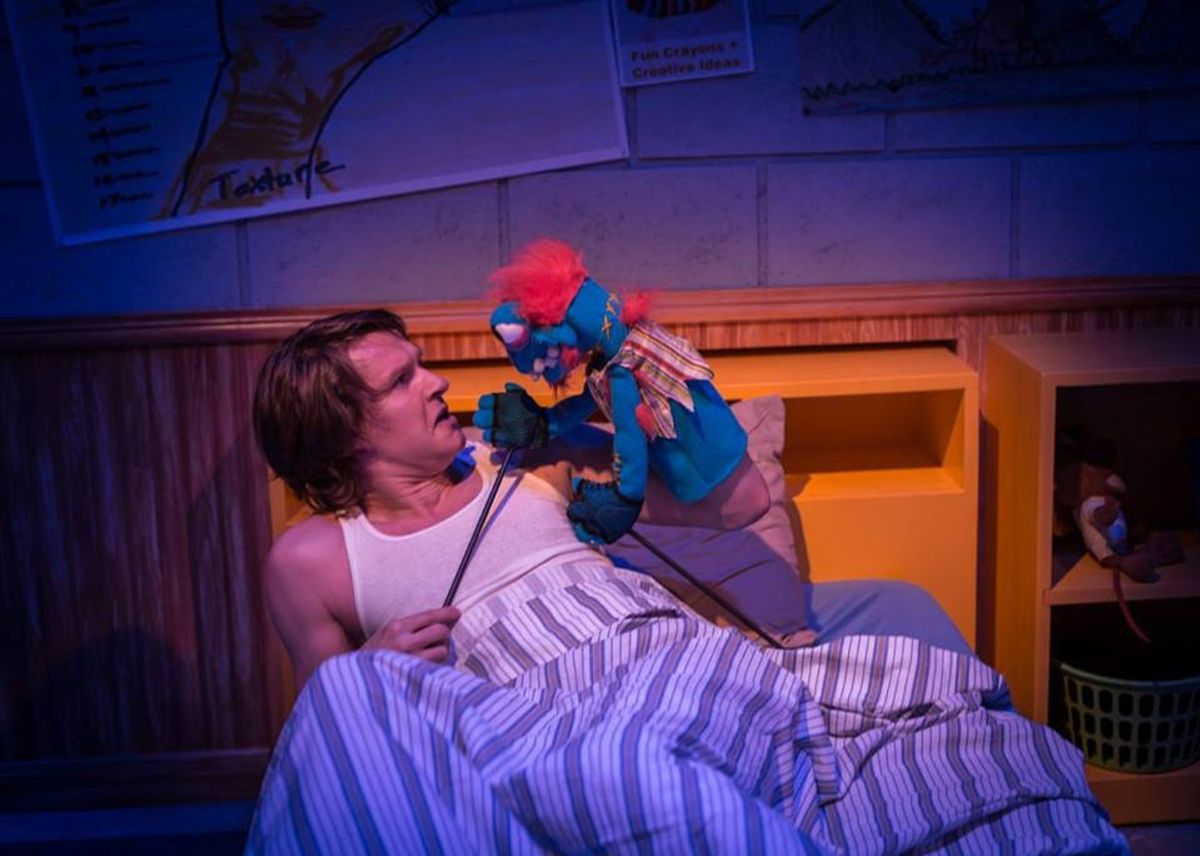 Courtesy of Michael Eaddy and the Hippodrome Theatre.

As college students, we face the challenge of coping with loss, baggage, and inferiority in unique ways. If one of those ways is embodying a demonically possessed hand puppet, then you may need therapy. The Hippodrome explores the importance of family, faith, and learning to let go in their production of Robert Askin's raunchy and almost sacrilegious dark comedy Hand To God.

Hand To God first premiered Off-Broadway at the Ensemble Studio Theatre in 2011 before transferring to the Lucille Lortel Theatre (also Off-Broadway) in 2014. The play would later make its Broadway debut in 2015 at the Booth Theatre, where it would receive six Tony Award nominations, including one for Best Play.

Hand To God concerns a mother, Margery Stephens (played by Kelly Atkins) coping with the sudden death of her husband. Pastor Greg (Charlie Mitchell), in hopes of winning her affection, tries to provide her support through his church by placing her in charge of a youth puppet ministry. Her son Jason (John Kovach), who is also mourning the loss of his father, joins this puppet club. In this group, he creates a puppet named Tyrone--who seems to have a mind of his own. Tyrone helps Jason win the heart of his crush Jessica (Ariel Reich) and defend himself from local bully Timothy (Ryan George). When Margery suddenly develops an inappropriate relationship with young Timothy out of sudden lust, we see a creepy Tyrone control Jason's every move, to the point where chaos ensues and all Hell breaks loose (no pun intended).

As Jason and Tyrone, Kovach faces the challenge of portraying two characters physically and vocally in one body. His Jason contains the right amount of meekness and shyness while still displaying a heart of gold, whereas his Tyrone is instinctively out of touch with Jason's mannerisms. Kovach uses his entire body and face to embody his hand puppet's every move. Vocally, Kovach uses a mousey Texas twang for Jason while immediately switching to a gravely standard American dialect for Tyrone, almost resembling a chainsmoker. The only criticism that I have for Kovach's performance is that I wish he would go further with his portrayal of Tyrone, something that would come with six more weeks of performances.

Atkins' performance of Margery was multi-layered and energetic. Having previously appeared in The Hipp's productions of The Toxic Avenger and The Great American Trailer Park Musical (among other credits), Atkins clearly knows how to carry a high energy show. The relationships she maintains with her fellow actors are clearly defined and dynamic in nature. We see Atkins brings a sense of aggression around George's Timothy, which creates a unique chemistry between the two actors during their BDSM-filled scenes. Similarly, Atkins, in her portrayal of Margery, creates a unique balance between unconditional love for her son and intense grief from her husband's recent demise.

Reich and George have a cute and almost childlike chemistry as Jessica and Timothy respectively. When you see the two onstage, you can almost picture a catfight about to occur. Similarly, Reich is able to add a sense of maturity and initiative when taking the reins of a chaotic moment--especially when Jason and Tyrone destroy the church basement during Act Two.

While George (who previously played the rambunctious Spike in the Hipp's production of Vanya and Sonia and Masha and Spike) is having a ball onstage as Timothy, I am confused by why he was cast in his particular role. George seems to appear older than 15 or 16, which seems confusing since Reich and Kovach seem to type well for their roles. Despite this, I enjoyed his virile demeanor, his playfully rebellious attitude around Margery, and his realistic portrayal of drunkenness onstage.

Mitchell, as Pastor Greg, attempts to balance the pious and well-intentioned with the hopelessly romantic. Playing a role recently portrayed by Bob Saget in the Broadway production, Mitchell is able to bring a sense of cheesiness to his character--from his hysterical delivery of various swear alternatives (i.e. "God bless America") to his unbridled willingness to be Margery's lover (even when using the same cliched tactics to achieve said objective). Mitchell still manages to give Pastor Greg the right amount of heart and pathos, especially when helping Jason cope with his mother's grief.

Scenic designer Michael Eaddy turns the Hippodrome's stage into a low-budget Sunday School basement, with school chairs complete with tennis ball noise reducers, posters of Jesus and child-drawn self portraits plastering the walls, and toys galore. Rather than create additional sets representing Jason's room, a playground, and Pastor Greg's office, Eaddy uses furniture props to indicate said locations. The two most recognizable scenic elements from his design include a bed pushing out from one of the bookshelves and a functioning swing set that is moved up-and-down automatically.

The sound design for this production, courtesy of Amanda Yanes, is rather simplistic in nature, with the sole effects in use being the same repetitive Sunday School music being sung by a children's chorus. Some annoyingly inspirational gems from this production's soundtrack include "He's Got The Whole World In His Hands," "Reap What You Sow," and "I Got The Joy, Joy, Joy, Joy Down In My Heart."

The puppets for this production, designed by Morgan Kelly and provided by Jacksonville's Players By The Sea, are crudely constructed to resemble puppets made by children. The most realistically designed puppet used in this production would be the normal-looking version of Tyrone, who appears in the beginning of Act One and during the final scene of Act Two. This puppet, with blue felt and red hair, almost reminds you of Walter from the 2011 Muppets movie, with wide eyes and an innocent face. However, in the majority of the play, you see a more evil-looking Tyrone, with large teeth, a ripped up shirt, and fingerless mesh gloves. This interpretation of Tyrone can be rather exaggerated, even when depicting the devil in hand-puppet form. Jessica's puppet, Jolene, can almost resemble Lucy the Slut from Avenue Q, with a face that resembles Jessica Rabbit, plump lips, and a large pair of felt breasts for good measure.

The Hippodrome has kicked off the spring of its 44th season with the right amount of laughs and pathos with their production of Hand To God. With a talented company and colorfully crazy puppets, this production will please adult audiences aplenty. UF and Santa Fe students should especially check out this production to take away its messages of faith, love, and the importance of family. This production may have puppets, "but it's definitely not for children," says the Hipp.

*Member of the Actors Equity Association, The Union of Professional Actors and Stage Managers in the United States.