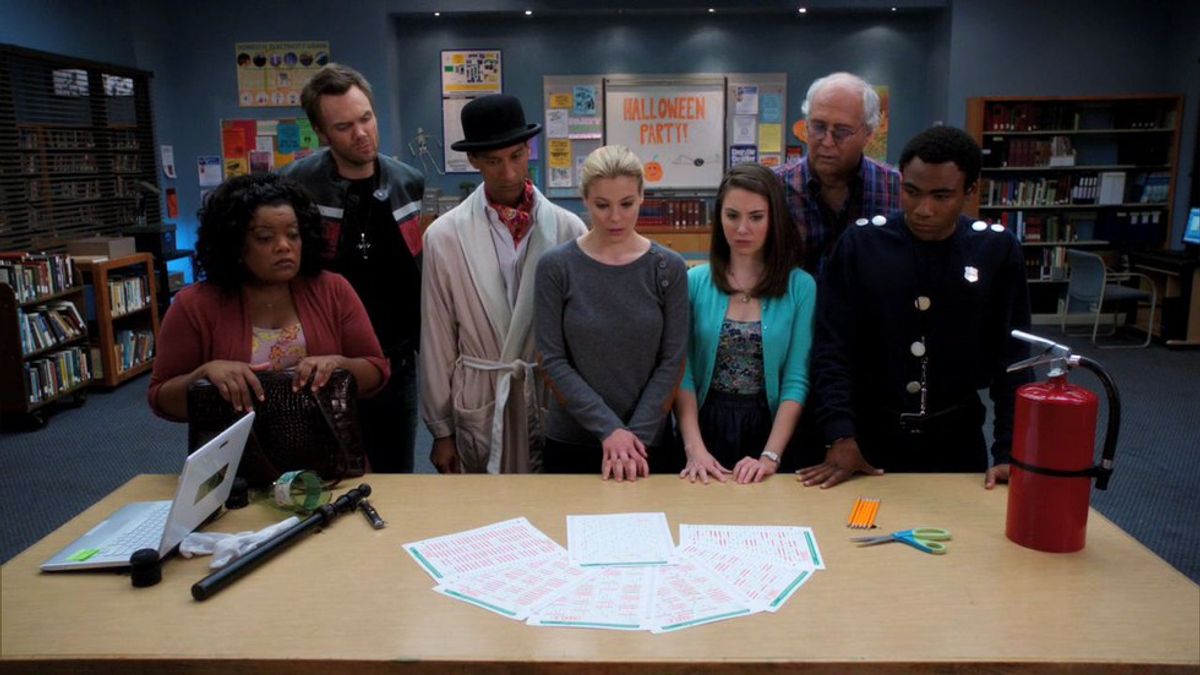 Halloween, which began as a religious holiday, has grown into a big celebration with a large following that allows themselves to let their freak flags fly for one night of the year. During the Halloween season, the television and film industry join in on the fun and produce horror movies or Halloween themed episodes.

“Community,” a comedy that ran on NBC for five seasons, was cancelled and then picked up for a final season on Yahoo! Screen was known for its elaborate and creative holiday episodes. On Halloween the show produced episodes that not only paid homage to classic horror films, it also was able to capture the spirit of Halloween in 22 minutes.

“Community” focuses on a study group at a community college and the adventures and hijinks that they get involved in. The first Halloween themed episode aired during the first season, but in the second season, the show took Halloween episodes to another level and this trend continued throughout the run of the series. This episode, titled “Epidemiology,” has the study group attending the school’s annual Halloween party. The school’s dean put the party together and bought the food at an army ration store. Little did the dean know, is that the food he bought was a part of some science experiment, and the harmless taco meat at the party gave the guests zombie-like symptoms, including the habit to bite and infect the other party goers.

The parts of the episode with the zombie party guests referenced famous zombie movies like “Night of the Living Dead” and “Dawn of the Dead.” In order to save the party guests from succumbing to dangerous high fevers from the mystery food, two of the study group members, Troy and Abed become the last uninfected guests that can make it to turn on the air conditioning. In order to turn on the air conditioning, the two friends have to walk through the group of infected people. The most powerful moment of the episode is when Abed sacrifices himself for Troy as he helps his friend reach the air conditioner.

Although the episode was extremely humorous and the pop culture references the show is known for were fun to point out, the theme of the episode circled around to having a good time with your friends, which is one of things that makes celebrating Halloween a lot more fun.

In the third season Halloween special, titled “Horror Fiction in Seven Spooky Steps,” the study group gathers for Halloween. Aspiring psychology major Britta gave the group psychopath tests, where it was revealed that one of the members is a psychopath. Britta tells them what she believes is a spooky story and tries to figure out which member of the group is a psychopath but observing their reactions to the story. Unfortunately for her, this plan does not work and the group ends up telling their own spooky stories.

Telling stories and legends has been a part of human history for centuries, including telling scary stories. Gathering with a group of people and exchanging spooky tales has been a long standing on Halloween, and “Community” put a nice twist on the tradition.

At the end of the episode, Britta finds out that she administered the answer sheets of the tests into the grading machine upside down. After sending them through the machine, it is revealed that everyone in the group except for one person is a psychopath.

In season four, “Community” when through a big behind the scenes transition after the firing of series creator Dan Harmon. Although viewers still felt that the show was missing something after Harmon’s exit, season four was still fairly enjoyable.

Season four’s Halloween episode “Paranormal Parentage,” had the study group go through a “Scooby Doo”-like chase in the mysterious mansion of the group’s senior member Pierce’s home. The episode was not as memorable as the previous Halloween specials, but it was a nice homage to newer horror films of the paranormal variety, like ”Paranormal Activity.”

For seasons five and six, Harmon was invited back after the show’s small but dedicated fan base petitioned and practically begged NBC to allow Harmon back. Season five premiered in January with an order of 13 episodes, and no Halloween episode was featured. This was also the last season of the show that was featured on NBC.

After season five, “Community” was cancelled, but in 2015 the show was picked up by Yahoo! Screen. This was another 13-episode season and the finale was written like a final goodbye to the series.

Halloween is often celebrated by the whole population, but it is also one of the main holidays where the people who are often seen as outsiders, or do not really fit in, have the chance to let loose and have fun. As a show that often appealed to this group of people, “Community” was able to produce Halloween episodes that captured the spirit of the holiday and the hearts of the audience.