Growing To Love My Non-Binary Identity

Yes, it's okay to be in between. 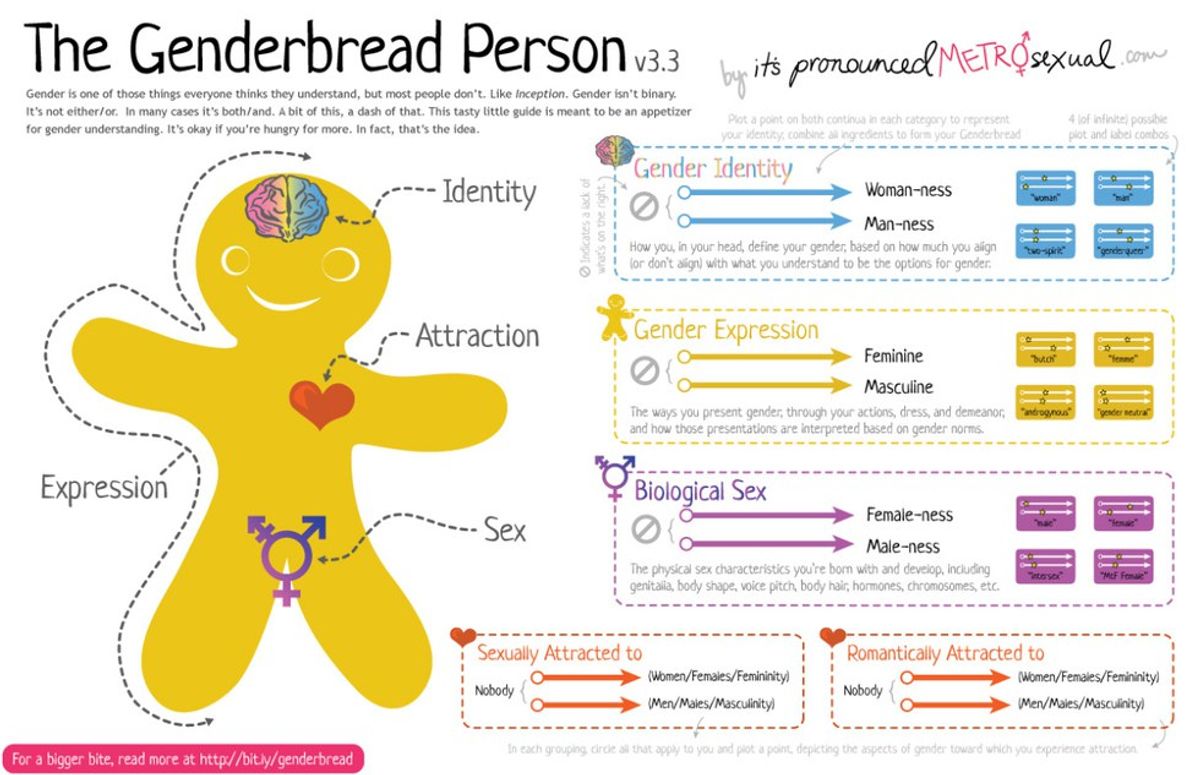 Disclaimer: the following opinions, while supplanted by common LGBT+ definitions, are purely my own, and are simply a reflection on my own experience, not necessarily that of other trans* individuals.

Are you a boy or a girl?

A simple enough question for most, yet one which has followed me around in either awkward, brazen, or simply confused voices for the last couple of years without any sign of resolve anytime soon. Usually, I let these graceless interactions simply pass me by, most strangers not being near worth the effort needed to explain the identity that I haven't yet been able to piece apart myself.

What defines our gender, and where does the relationship exist between how we're perceived and what goes on behind our eyes? As a camp counselor over the summer, I was interrogated daily on my gender status by the group of seven year old's I was looking after, always answering with a non-committal "Well, what do you think?". The following responses, like "I think you're a boy, because you wear your hat backwards", never ceased to both amuse me and get me thinking. My group of (sometimes brutally) honest campers saw both aspects of female and male identities within my daily appearance, mannerisms, and general expression. At the time, it felt like an illustration of how uncomfortably in between identities I was, stuck anxiously rubbing my neck and shaking my head, looking back and forth stuck between "boy" and "girl".

Despite the very real internal struggles and anxieti es that result from any sort of gender dysphoria, I believe the vast majority of discomfort I felt over these years has resulted from not being able to answer such a seemingly simple question, either for that stranger that stranger staring out of the corner of their eye at the grocery store, or myself. It's something that comes up more often than you think, especially as a young adult: everything from sports teams to college housing to job applications. To me, it always felt like the kind of question that should have a definitive answer, despite knowing how kaleidoscopically varied the gender spectrum is.

It's taken me what feels like far too long to grow to love my identity. For the past year, I attempted to move towards a "fully trans" identity, feeling as if I needed to close that gap of uncertainty and finally give a straightforward answer that didn't need long, drawn out explanations about gender theory. However, this ended up being incredibly difficult for me. There are many individuals who don't identify with the sex assigned to them at birth - I'm not one of them. For the longest time, I struggled with feeling like I needed to relinquish my claim to the female identity, that I couldn't be "not a girl" without turning my back on any association with being a woman. That wasn't something I wanted to do, and it's taken me what feels like forever to feel comfortable with the idea that I don't have to. Wearing boy clothes and cutting my hair short allows me to express the masculine aspects of my identity, but I don't feel the need to abandon my past or the aspects of femininity that I do identify with. For the first time, I've begun to accept both pieces of myself. And while there's still plenty of work to do, with interspersed bouts of anxiety and self-doubt, I hope to only grow to love my non-binary identity even more.