59 Cringeworthy Moments Of 'Glee' That'll Make You Question Your Nostalgia

"Glee" is everything "Riverdale" wants to be. 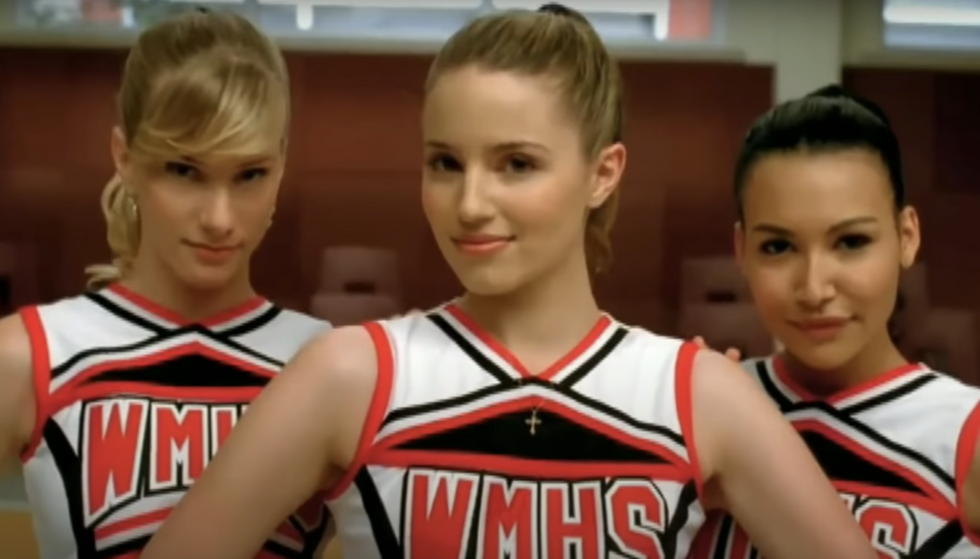 I don't know how, but I simultaneously believe that "Glee" should be dragged and awarded every Emmy.

If you're with me on this duality, please enjoy a compiled list of continuity errors and times Will Schuester should have been fired for the show we love to hate and hate to love.

1. When Will Schuester sang "Thong Song"

That said, in general, Mr. Schue rapping is a hate crime.

2. When New Directions stole from the deaf choir.

4. The glee club performed in wheelchairs, singing about rolling in 'Proud Mary' in solidarity for Artie.

5. How a riot started over tater tots.

10. After hearing Finn sing in the shower, Mr. Schuester blackmailed his student to join his organization by planting drugs.

glee: a summary mr schue: *puts on elaborate, full-scale performances at the end of every episode for literally no… https://t.co/gOYFggw2Yv
— ˗ˏˋ Isabel ˎˊ˗ (@˗ˏˋ Isabel ˎˊ˗)1523413332.0

15. When Mr. Schue tried to seduce Sue for personal gain and whispered, “You know what Wednesday is, right? …Hump day.”

19. Out of competitiveness, Rachel sent new student, Sunshine, to a crackhouse for glee auditions.

20. The undiscussed recasting of Rachel’s dad (to Jeff Goldblum).

22. Sam, A.K.A “White Chocolate”, stripped as a sophomore in high school.

23. Brittany continued to believe in Santa well into her teenage years.

24. Kitty sewed Marley's costumes to be smaller, so Marley developed an eating disorder.

28. When Rachel, Kurt, and Santana got robbed by a sexy Santa in their unrealistic New York apartment.

32. Brittany’s cat tried to join the KKKK (the Ku Klux Klan for Kats).

33. Artie went to college and got nearly every STI.

36. The puppet episode in season five.

37. Blaine’s cheating scandal that messed up his character arc.

38. When Sue made her students run on hot coals.

39. Blaine’s obsession with "cronuts" that caused him to gain the freshman 15.

42. The excessive number of times Becky refers to others as “b*tch."

43. When Becky wore a mistletoe hat and coerced people into kissing her.

47. How Quinn’s severe and debilitating leg paralysis after her car accident was healed in time for prom.

49. Subsequently to finding out her parentage, Brittany became a math genius who got early acceptance into MIT.

51. Sam’s frustration at Mercedes’s choice to wait for marriage.

52. Sue married and divorced herself.

53. High school teacher Mr. Schue asked his student to be his best man.

54. When Puck (played by Mark Salling, who was arrested and charged with possession of child pornography), said “I called dibs on all the chicks whose boobs aren’t done growing yet.”

55. When Sue, manifested through a Jigsaw puppet, trapped Blaine and Kurt in an elevator and forced them to get back together while she watched because she “shipped them.”

57. When Mr. Schue dressed like a bullfighter to perform a song in Spanish.

58. When Marley didn’t feel comfortable wearing a bikini top on stage and Mr. Schue suspended her for a week.

59. When Mr. Schue defended his students’ raunchy number by saying, “In 20 years, I guarantee that twerking will be a silly nostalgic dance. Do you want to be on the right side of musical history?”

what i respect about glee is they literally tackled every issue possible but not a single one of them was done well
— e (@e)1566103401.0