What Trump Has Done During His First Week In Office

What Trump Has Done During His First Week In Office

During his first week as president, Trump has signed 12 executive orders. 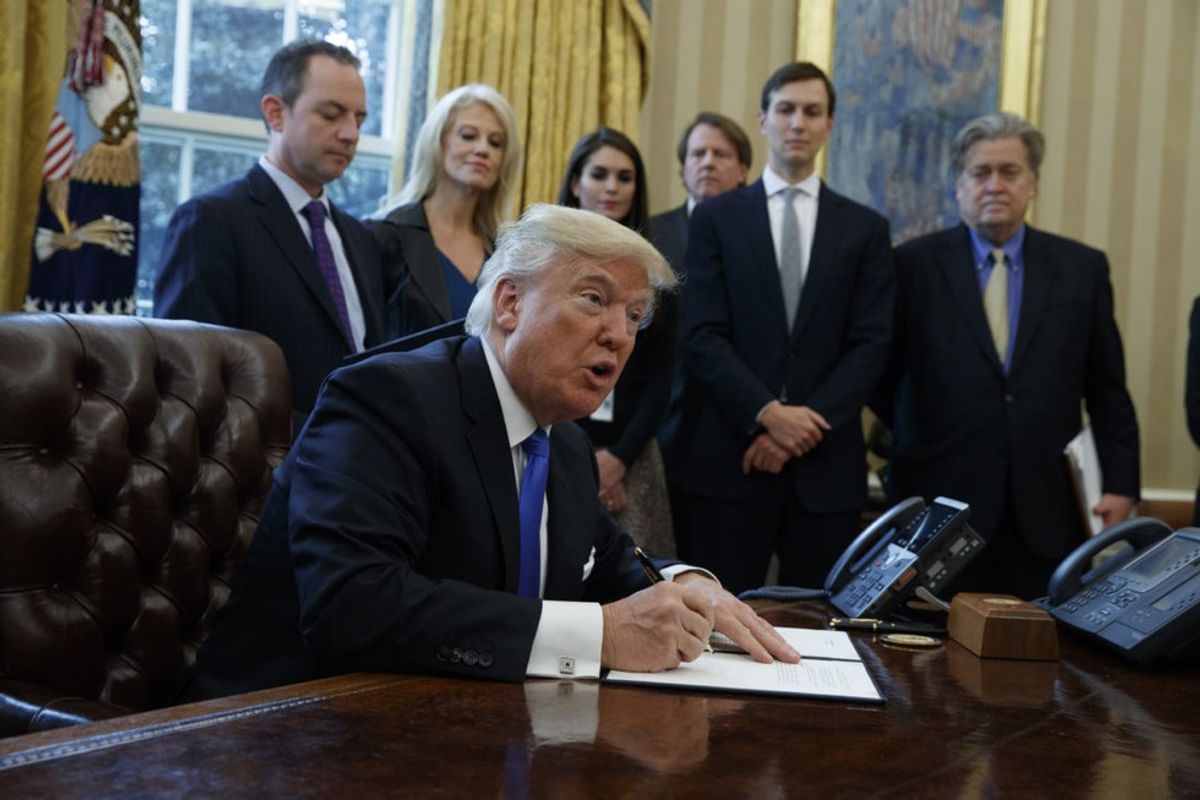 The days following Inauguration day, President Trump got straight to work. During his first week as president, Trump has signed 12 executive orders. Here are what those executive orders entail:

Trump has issued this executive order that tells companies to relinquish or permit exemptions from the fees and regulations of Obamacare, "to the maximum permitted by law." Yet, it is unclear how this will be construed by the agencies. Also the future of health policy is also uncertain

The Trump Administration also called for the cancellation of advertisements that urged people to sign up for Obamacare.

The President reinstated a policy, known as the "global gag rule", from prior Republican administrations. This policy blocks the federal funding from international family planning organizations, which either, provide abortions or discuss abortion services with patients. This not only applies to just family planning organizations, but to all health organizations around the globe that receive U.S. funding. This concludes that, if organizations are unable to give women in developing countries information about safe abortion options, it will lead them to use unsafe alternatives.

An existing policy allowed unauthorized immigrants who were caught crossing the border to be apprehended, then released into the U.S. for a scheduled asylum interview or a court date. However, Trump changed this policy, so now unauthorized immigrants who are caught crossing the border will also be apprehended, but they will now have to be detained or deported immediately.

Trump also expanded a policy of the Obama administration, of prioritizing the deportation of immigrants convicted of serious crimes. Now the prioritization is stretched to not only include the deportation of convicted immigrants, but also: those who were merely charged with crimes, or those the government concludes have committed "acts that constitute a chargeable criminal offense." The meaning of "crime" could be anywhere between driving without a license and murder.

Additionally, Trump figured in more agents to Immigration and Customs Enforcement's and Removal Operations Office and reinstating the Secure Communities Program. More over, he instituted the beginning of the construction of the wall along the U.S.-Mexican border he promised through the Department of Homeland Security. This will be paid with existing funds, but additional funds will be needed, and that still needs to be approved by Congress

Trump declared for a hiring freeze throughout federal government, under the exception of the military and national security/public safety positions. He also announced a regulatory freeze, which is only temporary. This means that agencies will not push new regulations until appointees or staffers from new administration approves them.

This new administration also froze public communications, such as social media posts and news releases, and accord spending at several agencies, which includes the Environmental Protection Agency.

Although the Dakota Access Pipeline has been a major controversy, Trump showed his support of it. Trump has also encouraged TransCanada to resubmit the application for the construction of the Keystone XL Pipeline and guaranteed quick action on future applications.