The fight against bigotry and Islamophobia continues. 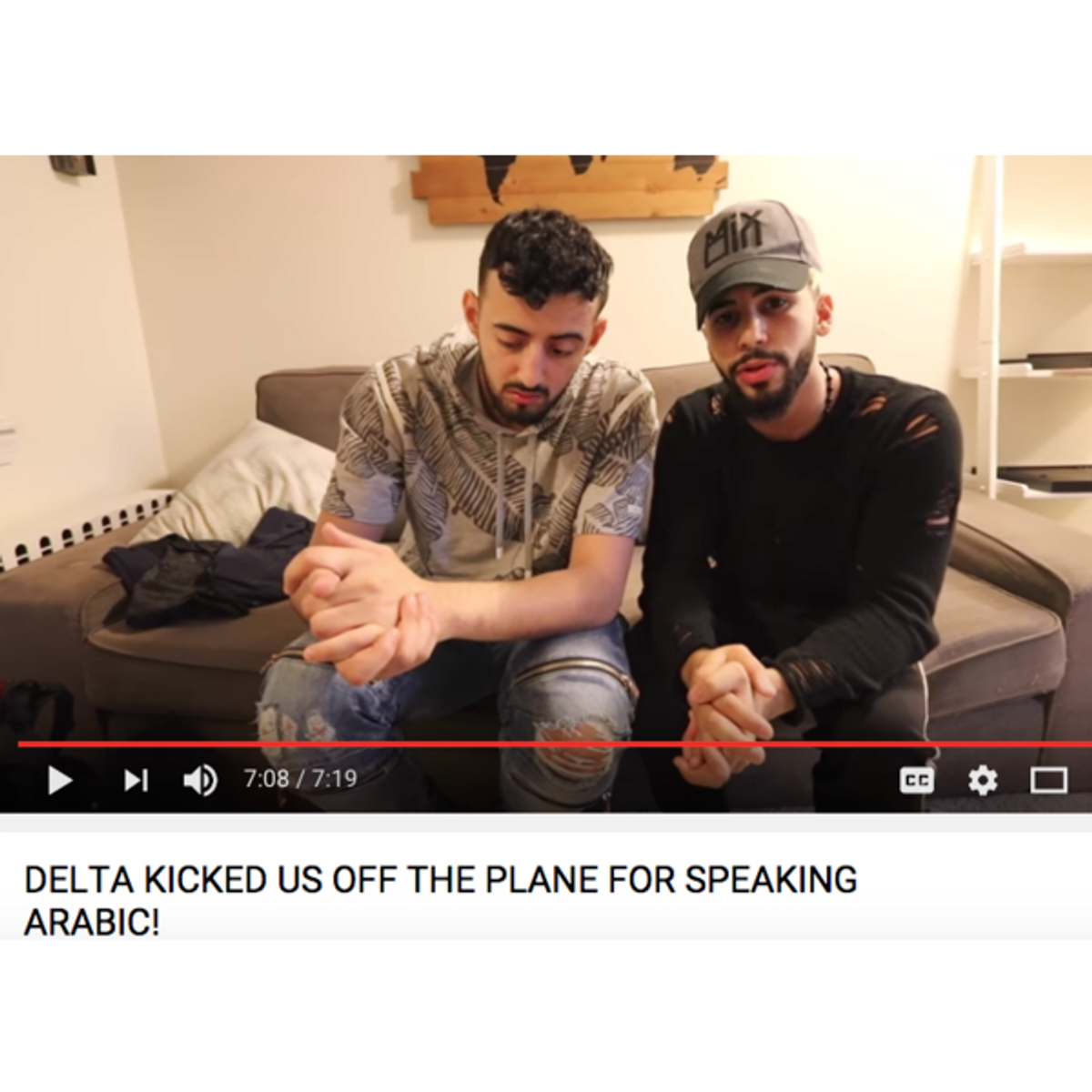 On December 21st, YouTube Star Adam Saleh posted a video to Facebook, showing that he was being thrown off a Delta Airlines flight for speaking Arabic. His video of him and his friend being escorted off a plane has been viewed over 36 million times. What that shows is truly heartbreaking.

Adam is straight up telling the camera that he is being kicked off because he spoke a different language on the plane and because of that the other passengers on the flight felt uncomfortable. In the video’s description, he said that he was speaking to Arabic his mother.

What is heartbreaking is that only one other person of color is bothered by this departure and no one disagreed with his statement, including Delta employees, or is seen standing up for him. Instead, you can see people cheerfully waving and saying “bye” to Adam and his friend.

“I’m about to cry right now seriously,” Adam says. “Because we spoke a word of a different language and it’s six white people against us bearded men.”

This isn’t the first time that Delta has allegedly kicked Muslims off their flights. On July 26, it was reported that couple Nazia and Faisal Ali boarded a Delta flight on their way home to Ohio after a trip to London and Paris, where they had celebrated their 10th wedding anniversary.

A Delta flight crew member had informed the pilot that a Muslim couple on the flight had left her feeling uncomfortable because Nazia was using her phone, wearing a headscarf, and because her husband was sweating. She also claimed that she heard the married couple use the word “Allah.”

In 2014 it was again reported that Delta kicked off an Imam Muhammad Abbace Ayleya because “his use of the airplane bathroom was doubtful.” Muhammed is Lynwood, NJ based, and fly’s often, even holding a Delta Platinum Elite member card and is approved by the U.S. Customs and Border Protection's Global Entry program, which expedites his security.

Delta is using reasoning that is directly implying they feel unsafe because of religious garb or behavior.

The reasoning they gave for kicking of Saleh was because he “sought to disrupt the cabin with provocative behavior, including shouting.”

Critics are quick to say that Adam Saleh probably deserved to be kicked off because he is known YouTube prankster who plays pranks using Islam and Islamophobia as his topic of interest. Skepticism over this is fair. I understand why people don’t trust the situation because of his video and history.

I checked out some of the plane related involved pranks he did and I saw three videos of interest—“Counting Down in Arabic”, “Never Wear This on a Plane,” and “I Smuggled Myself On A Plane to Another City and IT WORKED!!! (IN A SUITCASE).”

Adam recorded himself on a plane counting down in Arabic as an experiment and tested the reactions of passengers. He didn’t shout and no one even seemed to hear him. He even got a white passenger behind him to repeat after him in a casual and friendly manner. He did point the camera on one woman who just looked confused.

The second was a few seconds of him just wearing religious garb on a plane. The title was misleading. He didn’t even show reactions of other passengers.

The last one I watched I highly doubt was real. There’s no way a person can fly in a suitcase to Australia after going through security. Having studied video editing, I can tell you that that video looked extremely edited, and in my opinion, it was simply just a dumb prank to gain viewers.

Adam got kicked off because people knew he was a prankster and they were scared because they knew he was a Muslim prankster. Those three videos in question actually do not prove Islamophobia is real, but the one of him getting kicked off the Delta airlines flight does.

I can justify Delta’s actions if he was causing physical disruption on the flight that would’ve been harmful to other passengers and scary, and If he was being loud and extreme.

We don’t see what happened before Adam’s video. But it’ll pain me to know if he was, in fact, kicked off just because he was speaking to his mother in Arabic—or doing it as a social experiment; because if he was, it proves Islamophobia is real.

In a follow-up video, he explains that there was a lady behind him that asked him to speak in English because she felt really uncomfortable. And then a man sitting next to her got up and yelled "chuck them off the 'effing' plane," and that prompted other passengers to yell at Adam and say "get up!".

Adam then said that when the passengers confronted Delta crew, the crew members originally said that if they felt uncomfortable with them speaking in Arabic, the complaining passengers should leave the plane.

Chaos then ensued and the captain came out. Adam shares that since the captain saw everyone in a panic, he asked him and his friend to de-board the plane.

What makes me believe he is telling the truth is that one person who stands up for Adam on the plane asking Delta “why are you doing this.” He seemed hurt by the situation, too, and he makes it known to Delta staff that Adam’s departure for the reason being that he spoke Arabic bothers him.

All the other passengers simply waving bye ruthlessly proves they wanted Adam gone. If the whole situation in its entirety turns out to be another orchestrated prank by Adam, he must be held accountable. The situation shows that Islamophobia is on the rise because of the many people on the airplane not coming to Adams' defense, the many trying to kick him off the plane because of it, Delta’s reasoning that they believe he was going to play to prank, without him showing physical proof in which case they should be held accountable, and the thousands of people justifying Delta’s actions by kicking him off the plane because he was a known Muslim prankster. The fight against Islamophobia continues.