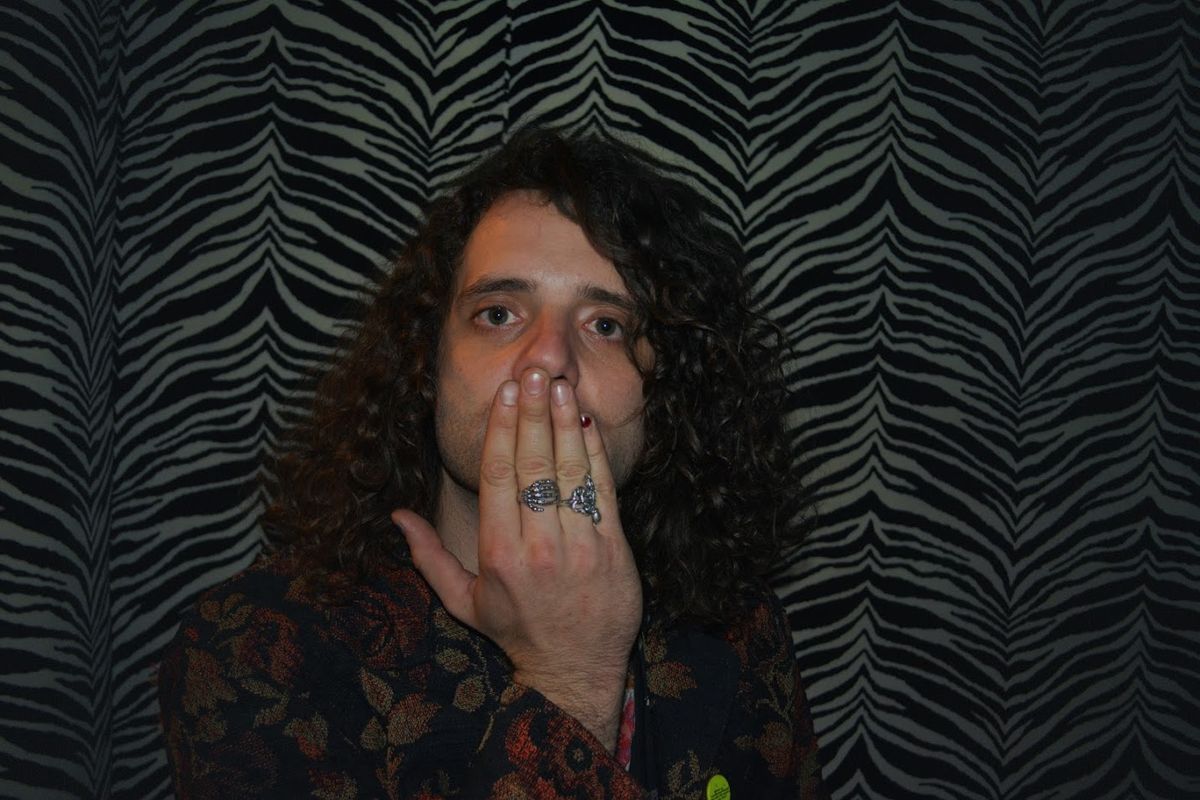 Imagine an electric wonderland of music and art where cowboys and aliens not only coexist but—dance, on gritty desert sand, surrounded on all ends by wistful mountain ridges. What if I told you this utopia for music lovers far from civilization yet in the heart of the desert is a reality? What if I told you it’s all happening in a few months? Well, this wonderland will have you in daze.

With exciting additions Iggy Pop, Cigarettes After Sex, and Sleep being the final touches to already killer lineup it’s no wonder Desert Daze is expected to bring thousands out to Joshua Tree’s Institute of Mentalphysics in October. Moon Block, the organization behind this marvelous madness, has also included in this year’s festival lineup Eagles of Death Metal, King Gizzard & The Lizard Wizard, Twin Peaks, Unknown Mortal Orchestra, Allah-Las, La Femme, and Ariel Pink amongst many more.

With the recent release of this full lineup, now is as good as anytime as ever to share my accidental interview with Mason Rothschild, guitarist of the band JJUUJJUU and art director of this whole euphoric shebang.

From talk of a magical music festival, to 90's Nickelodeon, to reptilian humanoids and the Illuminati my time with him was anything but ordinary.

It was 11:30 pm on a weekday in March when I found myself sitting beside Rothschild of the universe in a black-lit zebra striped room. To my left was Claire Hawley, the photographer half of our Claire Squared journalistic duo. She was capturing the moment as I conversed and commemorated my first official interview. Thank heavens Mason had a lot to say.

He was traveling with the Desert Daze Caravan tour, where he along with other featured artists from the past lineup ended up in our very own Downtown Las Vegas for Neon Reverb festival.

The conversation began with a personal explanation of how I was an aspiring journalist to which I was cut off with Mason’s reassurance, “Well no, you’re just a journalist. I feel like if you’re writing for a blog then you just are, you know?” “The first time I played a show, I’m a musician. The first time I was an art director—I was an art director.” he laughed and shrugged. With his words of wisdom, my mini notebook, color-changing pen, and my homemade badge I felt legit enough to continue with the confidence of the badass I could pretend to be.

I learned quickly Mason was a really cool guy to talk to and soon enough the basics were answered and conversation elevated. He shared his vision as art director “I wanted a story to tie all the installation, all the sculptural artists together so it wasn’t like Burning Man, a shipwreck here and a computer lab there.” With 125 people in his art department there was plenty of room for error and nervousness but Rothschild assured, “I luckily hired all these people that are such wonderful, talented individuals…” he was able to achieve sharing the wonder and amazement Disneyland brings little kids, with adults. “I wanted there to be more of a show than just a band on a stage.” He, and everyone involved in the making of Desert Daze ultimately aim to create an experience, “With our lineup and all our artists combined, we’ve just got the magic.”

“[When I think of music] I want to go to place with likeminded individuals…When you bring likeminded bands and all this very curated content you bring in a curated crowd. So the people that come in are all there for a singular purpose—to listen to music and experience art; not to show off fashion and hangout, that’s bullshit. That’s why we’re the anti-festival, Desert Daze is for a smaller audience…bringing the scene together.” He hopes Desert Daze can be a model for new festivals in other genres; more events that tailor to smaller crowds attending specifically to take in the environment created.

The commercialism of major leagues in the LA festival scene, like Coachella and Burning Man, was brought up. Mason affirms Desert Daze is simply not like that, “The commodification is just a byproduct. We want to do the coolest fucking thing for our community, but we also need to pay everybody.” Desert Daze is a rarity, genuinely by musicians and artists for musicians and artists, “we had to learn all this shit because none of us are from the festival world… we’re just trying to have a party, dude.”

We gabbed on a bit more about logistics and technicalities behind the creation of this experience before somehow ending up discussing Saturday morning cartoons. “I love cartoons,” after serious contemplation Mason declared his favorite had to be The Ren & Stimpy Show; a unique Nicktoons choice but a great one and no surprise at that. Talk led to internet streaming, the FBI, smart TVs, and finally conspiracies. Mason laughed, “Those fucking smart TVs they’re spying on your fucking house. Reptilian shape shifting aliens all the way at the top of the government—everyone’s fucked!” He denied being labeled a conspiracy theorist but did mention his name, “…the [Free] Masons and the Rothschilds are both kind of funny.” He did reveal one of his favorite books which he recommends to anyone, Cosmic Trigger I: The Final Secret of the Illuminati by Robert Anton Wilson; it’s the first in a series of autobiographical exploration pieces into the works of various conspiracies, religions, and perceptions; once again, an interesting choice to which I would expect nothing less.

An enormous thank you is due to Mason for not only taking the time to exchange words and share Desert Daze, but for bearing with me on the achievement of this milestone in my journalistic career and being undeniably interesting the whole way through. This will forever be one of my favorites in my reserve of stories to tell.

Mason’s and his partners’ with Desert Daze intention is to “create an experience that relates more to the senses than just a one dimensional band.” They create a temporary psychedelic sanctuary for lovers, funsters, and even punks to gather, revel, wallow, and enjoy. It’s a weekend of energetic multidimensional entity with a remarkable team coordinating and even greater attendees. So what are you waiting for? Get your tickets to #DesertDaze2017 now!

http://www.ticketfly.com/org/6675#streetteam
Report this Content
This article has not been reviewed by Odyssey HQ and solely reflects the ideas and opinions of the creator.