How The Discrimination Against Short Men Is Perpetuated By Women
Odyssey

How The Discrimination Against Short Men Is Perpetuated By Women 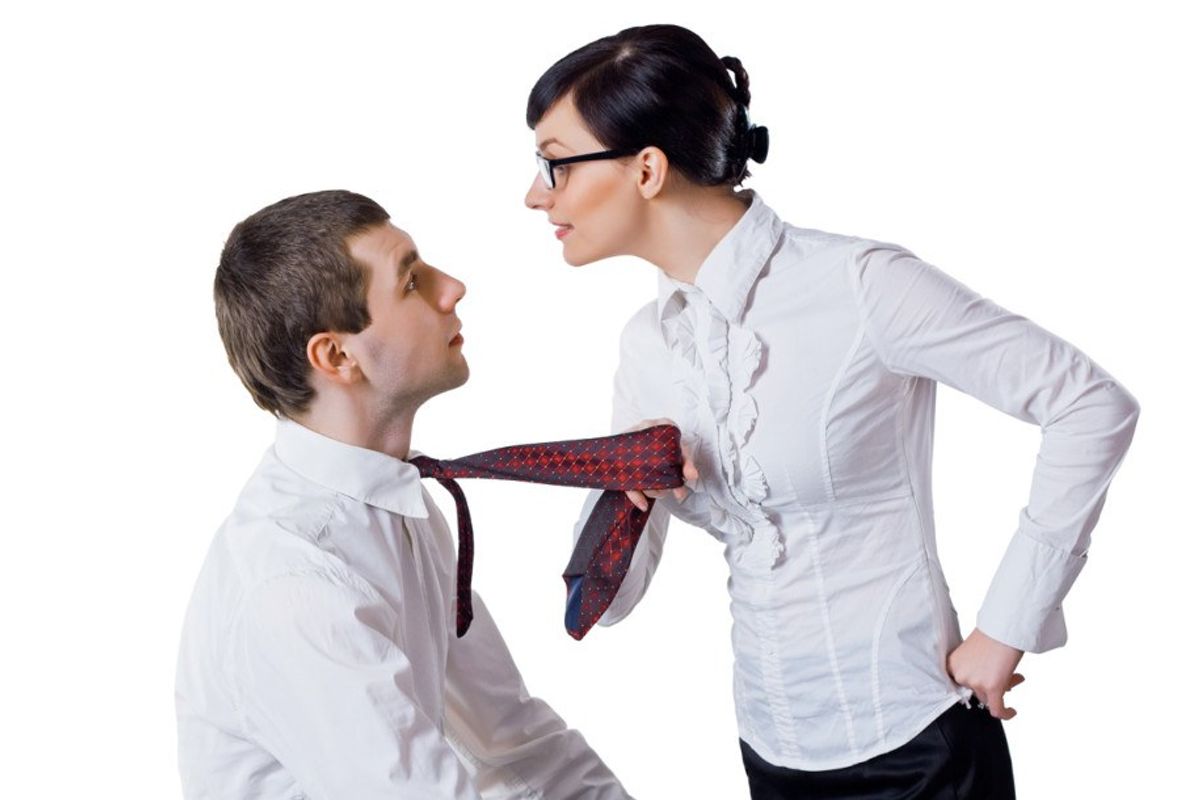 I’ve had so many conversations with girls that go something like this:

“Get real! Guys have it SO-O-O easy. They don’t have to spend two hours in front of the mirror putting on make up, just to be considered sexually attractive. Why do you have to judge us based on the way a girl looks? Why do you want us only for SEX? I’m more than just my body!”

So it would seem that women once again find a new way to set themselves as the victim class, thus earn the precious pity that purchases for them their power. Feminism seeks to absolve women of the act of sexual objectification and retain women as the pure, righteous judges of a man’s character rather than base animal lust. It is the popular notion that, while a man will fall for the woman with the best body, women will fall for the man who treats them the best -- a nice guy, her best friend, someone who drapes his coat over every puddle so she can walk without getting her feet wet.

Women are just as capable -- perhaps even more so -- of objectifying men.

It is true that women of girth are hampered from romantic pursuits. However, there are fat-fetishes and a fat-acceptance movement that is building up steam, and these are reversing that trend. There are even online communities such as Fantasy Feeder, where people get their sexual kicks out of either gorging someone else or being fattened up themselves. It's a sight you cannot unsee.

But there is a pervasive form of discrimination faced predominantly by men. It is called heightism -- the hatred of short men.

In fact, there is a Twitter account exclusively devoted to exposing the scathing, homicidal contempt women hold against short men:

Notice how many of these hateful posts are made ... by women?

An obese woman can (often) work off her weight while a misfigured woman can pepper some makeup on her face. But a man has no ability to change his height. And, so far as I have researched, there is no fetish for short men to save them. Meanwhile, women are able to find themselves sexually attractive no matter their height -- there a men who love petite women, and men who love long-legged, statuesque Russian wonders. But a short man -- unless he has compensated for his lack of height by obtaining a great job, a lot of money, an expensive car, a charismatic personality, or simply greater musculature -- has virtually no hope of finding a lover.

Clocking in at 5' 10'', I think barely escape the "short man" threshold, though I still face much more lonely existence than my 6-foot tall brothers, whose lives are saturated and enriched by plenty of sexual encounters.

But then there's my friend -- he's 5'7'’ and 22 years old. For the sake of his future public image, he will remain the Anonymous Short Man.

The Anonymous Short Man has never had a girlfriend, only ever kissed his mother, and he's had more than his fair share of debilitating rejection than I. He is entreated with the same old, trite advice from women: "Be her friend!" or "Just wait and the right one will find you! Trust and believe!"

People ask this Anonymous Short Man if he is old enough to smoke. People talk down to him, condescend him at job interviews. Twelve-year-olds flirt with him, while the gazes of older women just pass over him. Literally.

Short men are obviously discriminated. Contrary to what every Feminist will claim -- that a system of "hegemonic masculinity" means men are the causes of their own problems -- it is women, not other men, who are setting upon us the height standard.

Women wish to be dwarfed. It hearkens back to our biological ancestry. Women want to be protected by men. They might view a small man -- not a tall man -- as a threat to their femininity, since his subordinate status competes like a quasi-femininity. This peer-reviewed study from the UK among 12,000 couples reveals that, for 92.5 percent of couples, the man was 5.6 inches taller than the woman. One might question this, since men are after all typically taller than women, and perhaps women are pressured by a patriarchal culture to select taller men. But a joint study out of Rice University and the University of Texas concluded that, of all the relevant factors, 49 percent of women only wanted to date men taller than themselves, whereas only 13.5 percent of men only wanted to date women shorter than they were. Women have much stronger height preferences than men.

Despite Feminists claiming that women want to be equal with their partners, these studies prove consistently that women don't really want equality -- they want to be paired with their betters, including according to height, even if that looks very similar to a patriarchy.

In evolutionary terms, of course it makes sense that females prefer tall men. Height indicates strength, authority, and virility more often than not. Tallness means the male has more access to limited resources. This means that, when the biological cards of the mating game are dealt, the Anonymous Short Man is getting the short end of the stick.

It's not that women are unreasonable or even cruel for preferring taller men. We are all entitled to our choices, no matter how shallow or stupid our criteria may seem. We deserve to hold standards -- but, likewise, we will also be held to others' standards. It's when young men are kept in the dark, perhaps even deceived about a woman's standards, that his lot in life can be declared one of cultural oppression.

Why do (many) women lie about, or lack the ability to express, their preferences? Perhaps they are trying to preserve the image of virtue society sets upon women -- an image that is ironically more chauvinistic than Feminist. Like men, who are shamed by women and the media as predators for expressing sexual interest, women are "slut-shamed" by other women for taking advantage of their sexual powers too often. Dealing with the pressure that women set upon each other, women will naturally tell men "slanted" advice in order to save face on their reputation.

This hidden double standard women hold against men is a legitimate problem for society. The issue goes beyond height. The media, academia, and popular culture tells one message to young men, that they will be loved by women if they follow one set of criteria -- if they are nice, if they become a woman's friend, if they just "wait for the right one," and if they persistently defend the rights of women by becoming a white-knight Feminist. Tactics that never work, of course.

Young men then apply these tactics in their real life relationships with women, but they still remain single -- they are relegated to the Friend Zone, ignored, or even mocked by the very women they love. It is men of height, facial hair, and the "bad boy" personality that are winning women away. They are tired of seeing the very men that Feminism decries as "toxically masculine," are the only ones who are permitted to have sex.

Now we are seeing a rising generation of angry short men who are devolving into true, outspoken misogynists. But Feminism is not solving this problem. Feminism creates it.

The suffering and loneliness many millions of short beta males is either ignored, or worse, mocked and degraded as a lowling form of misogyny by the very people -- Feminists -- who claim to stand for their sexual rights and equality. It proves that they do not actually care about the issues of men, they do not care about equality, only the appearance of equality.

Challenging this problem doesn't require a glorious revolution. Women, and the Feminists who supposedly speak on their behalf, simply need to take a deeper look at themselves. Do not spread one message out to men in the light, and leave them to find the truth in the darkness.

Superficial qualities such as height aren't everything for men -- but it means much more to women and society than they ever dare admit.

5 Reasons Why I Will Take An Unpaid Internship