The feelings and opinions I have post election night. 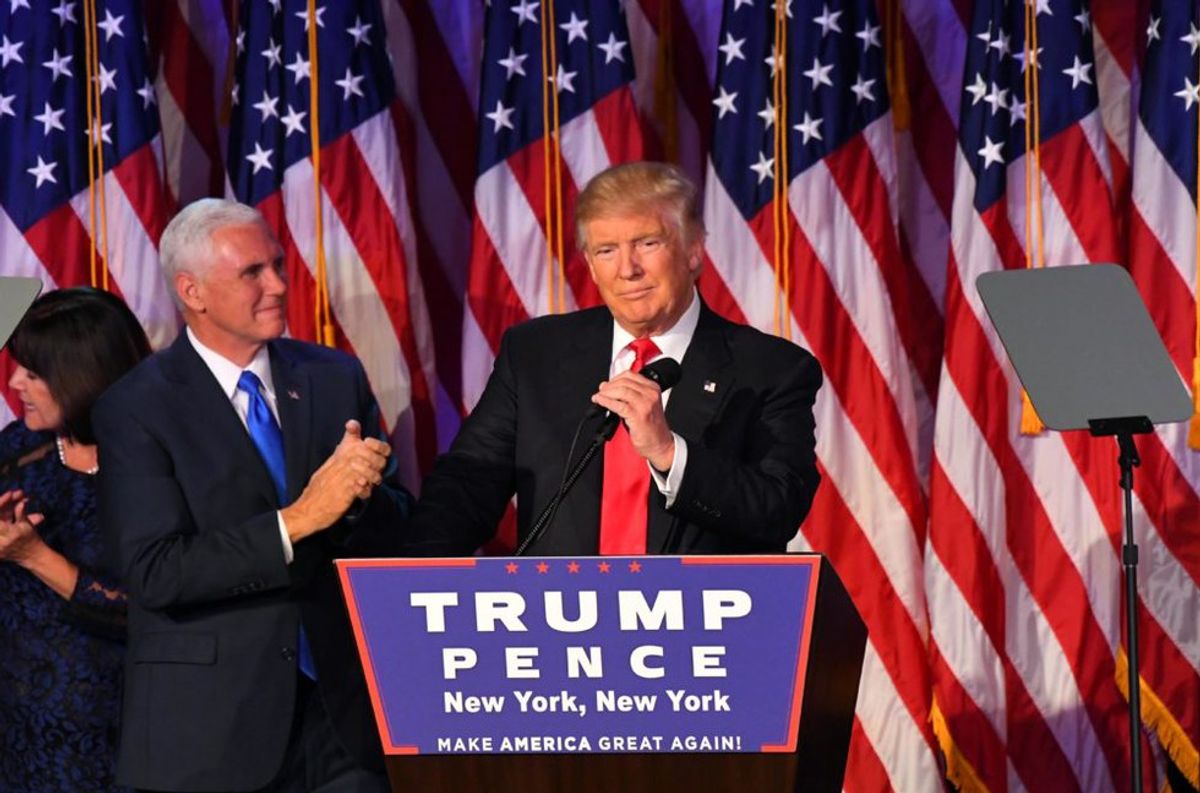 Well, more like this morning after 2 a.m. America made the final decision for our elected President of the United States.

Donald Trump is officially next in line to take over after President Barack Obama. And those are words I never actually expected to voice.

Last night was a rollercoaster of emotion for many people as they watched the numbers go up and down for each candidate, until eventually...the numbers kept going up for Trump and slowed tremendously for Hillary Clinton.

From the beginning of this campaign, I really was unsure of where to lean. In my eyes, none of the candidates perfectly fit the bill. But in reality, none of them were going to. No president has fulfilled all of the promises they've given, and no candidate was going to appease every part of the public.

The unfortunate thing about this election was that this country was pretty much split right down the middle. And for over a year, all that we have heard day in and day out are debates and confrontations. Bad news on the television about riots and shootings. Tears have been shed far too much the past few months.

And today, after an incredibly long day and night, half of the country has shed many more tears. And I realize that I was in no way emotionally prepared for this.

As a 20-year-old, this is my first presidential election I was able to take part in. I informed myself when I could, I watched the debates, I read the news. I knew from research that this election was going to be a tough one.

But I did not actually expect this outcome. Not necessarily Trump winning, because I knew there would be a chance of that. But due to so many millennials getting involved this election, I truly thought that would have been a tipping point for Clinton. And alas, it wasn't.

I am in no way saying that Clinton would have been the better option. This article is not to create more debate on who would have been better because there is no point anymore. The decision has been made.

However, it is meant to make a point about the aftermath this decision is leaving on multiple demographics.

I personally know multiple People of Color (PoC) who are now upset and terrified of where this new presidency will go and I can't blame them. I have heard from people about young family members coming up to their elders crying because they're afraid the ones they love are going to get deported. It does not matter where you lean on immigration, because at the end of the day, no child should be shedding tears over something like that. I am not saying that immigrants from other countries shouldn't do their part in this country because it is only fair. However, I know of many families that have fought to be here and become citizens and have created wonderful homes here. And now they're shedding tears.

People in the LGBTQ+ community are scared and afraid, myself included. This new presidency means having no idea what will happen in the community, especially with a vice president who advocates for things such as conversion therapy. Now I am unsure where my future lies, especially when it comes to the legalities of my relationship on a federal level. Or what this means for other people in the community.

Effects of this election also hit people who have been sexually assaulted. For months the world has listened to the words Trump has said concerning women and sexual assault. Regardless of whether or not you believe the things he has been accused of are true or not, having conversations like this is demeaning and degrading towards those who have been abused or assaulted.

This election caused me to wake up with a heavy heart, and I truly did not expect it. But I want to make a point that this country has been split for months, and that hasn't changed. No matter where you land on this decision for POTUS, remember to keep a strong outlook, a kind heart and a thoughtful mind when it comes to talking to other people. You do not know how people are feeling.

I do not know how this will pan out, and I absolutely hope and pray for the best. And I planned on doing that no matter who was elected.

The most we can all do is congratulate Trump on his election, because no matter how you feel about him, he did win the presidency. The people that are hurt and scared right now have varying reasons, as do the people who wanted Trump to win.

As a country, we will be fine. Let us show by example and be faith-filled, strong, and unite with our friends and neighbors and show others how America should be.