Eating Alone: The Most Irrational Fear

Why we shouldn't be afraid to eat alone in public. 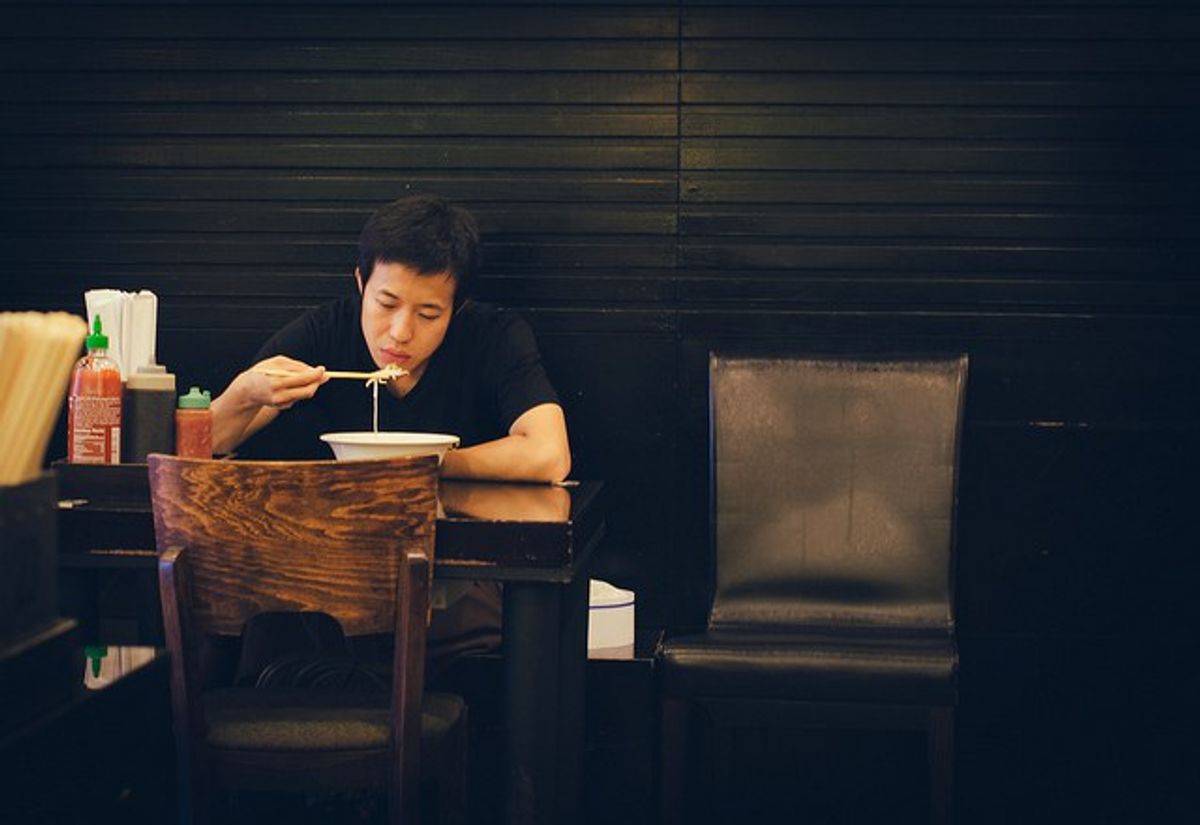 Remember the middle school days? The awkward clothing choices, the girls growing taller than the boys, the first traces of makeup on the faces of gossiping girls and—do I dare say it? The lunchroom.

I don’t know about you, but I still remember the feeling of anxiety that spread through me as I walked into the cafeteria, especially on the first day of classes. And I still remember what went through my head: Who am I going to sit with? Where is so-and-so? What if they’re absent? People are going to think I’m a friendless loser if I sit by myself.

The sad thing is, a lot of these thoughts still go through our heads as adults. I watch it happen every day. Around dinnertime at my college, you can always find a decent number of people lingering outside of Dining Services, waiting for a friend. Because, God forbid, you can’t enter without a companion. I have been one of those people before, but at a certain point, I realized how stupid it is. I mean, are we really so self-absorbed to think that everyone is actually staring at us when we’re trying to find a seat? And do people really think we’re friendless losers if we sit alone? No. Honestly, I doubt most people even notice. The only time anyone might actually notice or care is if you’re giving off a vibe that screams: I have no confidence!

As I was sitting at Starbucks, writing this article, the man at the table across from me was sitting by himself. He kept looking out the window and checking his phone. I could literally feel the anxiety radiating off of him. And what do you know? About 15 minutes later, his friend showed up. This man’s face immediately relaxed, and relief replaced his anxiety. I think I need to reiterate that this was at a coffee shop—one of the only places where it’s considered “socially acceptable” to sit alone. But even then, the people sitting alone tend to appear preoccupied with computers or notebooks.

You know where you can’t usually pull out your notebooks and pretend to be preoccupied? Nice restaurants. Sometimes I’m in the mood for a decent meal, and sometimes I just want to be alone. But I’m telling you right now, if you go to a restaurant and sit at a regular table by yourself (not the bar), people will look at you. Not to mention, you’ll probably feel slightly judged when the host asks how many will be dining and you say, “one.” I wish this weren’t the case, but it is! Even if the host isn’t judging you, you’ll likely read it that way. The key is to not care what other people are thinking, which is certainly easier said than done.

The only reason you’re even thinking about it is probably because the same ideas have run through your own head at some point about someone else. Don’t pretend you haven’t gone to Perkins, noticed an elderly person sitting alone and immediately felt sorry for them since clearly their spouse died. But you don’t know if that person was ever even married! Or maybe their spouse is alive and well, but he or she didn’t feel like going to Perkins that day. Whatever the case may be, it doesn’t really matter, and we should stop assuming people are sad to be sitting alone.

So go eat a meal by yourself in a public setting sometime. Go to a restaurant and proudly declare a party of one. I dare you. Not only will you get one step closer to not caring about what people think, but I’m also willing to bet that some part of you might actually enjoy it.