Eagles Get Close, But Can't Finish Off The Comeback In 27-22 Loss To The Redskins.

Eagles Get Close, But Can't Finish Off The Comeback In 27-22 Loss To The Redskins. 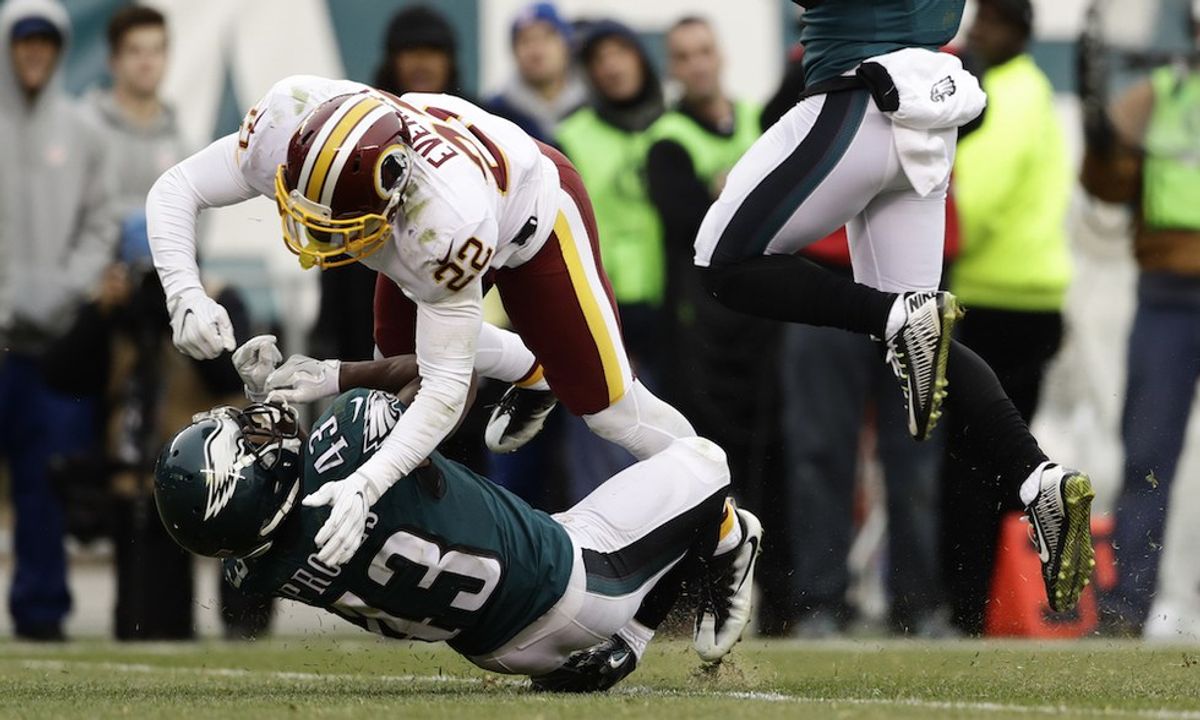 Well, at least they tried hard.

That seems to be the general consensus surrounding the Philadelphia Eagles after they lost 27-22 to the Washington Redskins at home, falling to 5-8 and 0-4 in the NFC East. With all chances of making the postseason going out the window after their fourth straight loss, here are some thoughts from the Birds' latest defeat:

DeSean does it again

Man, is it going to be nice when DeSean Jackson is back in green next year catching bombs from Carson Wentz, just like the 80-yard touchdown he burned the Eagles for on Sunday. On Washington's second possession of the third quarter, quarterback Kirk Cousins launched one down the field to Jackson, who burned cornerback Leodis McKelvin (surprise, surprise) for the TD to make it 14-13 Washington. Jackson finished with just three receptions, but all it took was one to make a game-changing play. That's the type of player Wentz could use at his disposal in the future, Mr. Roseman.

The Eagles rank third in the NFL in penalties, and once again committed one that cost them points. It seemed like a dream start to the second half for Doug Pederson and Co. after forcing a three-and-out on the Redskins' first possession of the second half that was followed by a 72-yard punt return TD from Darren Sproles. But in typical Eagles fashion, the play was negated by an illegal block penalty called on Zach Ertz. Instead of pushing the score to 20-7, Philly punted, which was followed up by the Washington TD to give them the lead. If there's one thing Pederson must work on this offseason, it's discipline (and a few other things).

File that subhead under the category of "Things I never thought I'd type." In the second half of the game, Jon Dorenbos left the game with a wrist injury, and was relieved by Brent Celek, who a couple drives later sustained an injury as well. Before he left the game, though, Celek was called in to take Dorenbos' place and it didn't go well. Late in the third quarter, the field goal unit was sent out for a 50-yard attempt, but Caleb Sturgis was never able to get it off following a low snap from Celek that could not be handled by Donnie Jones. After Celek's injury left Mychal Kendricks and Trey Burton practicing snaps on the sideline, it was Burton who came in and did the job, connecting on a snap that led to a 41-yard field goal from Sturgis. With both Dorenbos and Celek out, it will be interesting to see who is handling the long snapping moving forward.

Cousins may have thrown for two TD's on the day, but the Redskins also found the end zone twice courtesy of the run game. A 6-0 Eagles lead quickly evaporated after running back Robert Kelley scampered into the end zone for a 22-yard score with under five minutes to go in the first half. Joining the party two quarters later was Chris Thompson, whose 25-yard rushing TD turned out to be the game winner with 1:53 left in the game. Heading into the last three games of the season, one of which is against Ezekiel Elliott, the Eagles' rush defense will have to be on top of their game to give the team any chance of pulling out a victory.

Deshazor Everett: Expect a call from the NFL

By now, probably every NFL fan has seen Everett's vicious hit on Darren Sproles in the fourth quarter of Sunday's game. With Sproles back to return a punt, Everett absolutely demolished him before he could even catch the ball, drawing a 15-yard penalty. And that's it. While there are some rumblings that Sproles was asking for it by not calling for the fair catch, there is absolutely no way to back up Everett's hit. He should be staring at his phone right now waiting for that message saying he's been fined by the league and if he doesn't get it, there's a problem. Hey Roger, do the right thing. If Eagles fans know anything about Sproles, it's that he is one of the toughest players on the team and will be itching to get back on the field.

- Carson Wentz once against eclipsed 300 passing yards, throwing for 314 yards and one touchdown, as well as an interception.

- Zach Ertz was the leading receiver for the second week in a row, recording a team-high 112 yards on 10 catches. Jordan Matthews was second with 8-79, while Burton managed seven catches for 65 yards.

- Fletcher Cox recorded his first sack since week four against the Detroit Lions, finishing with four tackles and 1.5 sacks. Seeing him perform was nice, but he can't go through stretches like that, especially after the contract he received.

- Leodis McKelvin did have a bright moment, returning an interception for a touchdown early in the fourth quarter to make it 21-19 Washington.