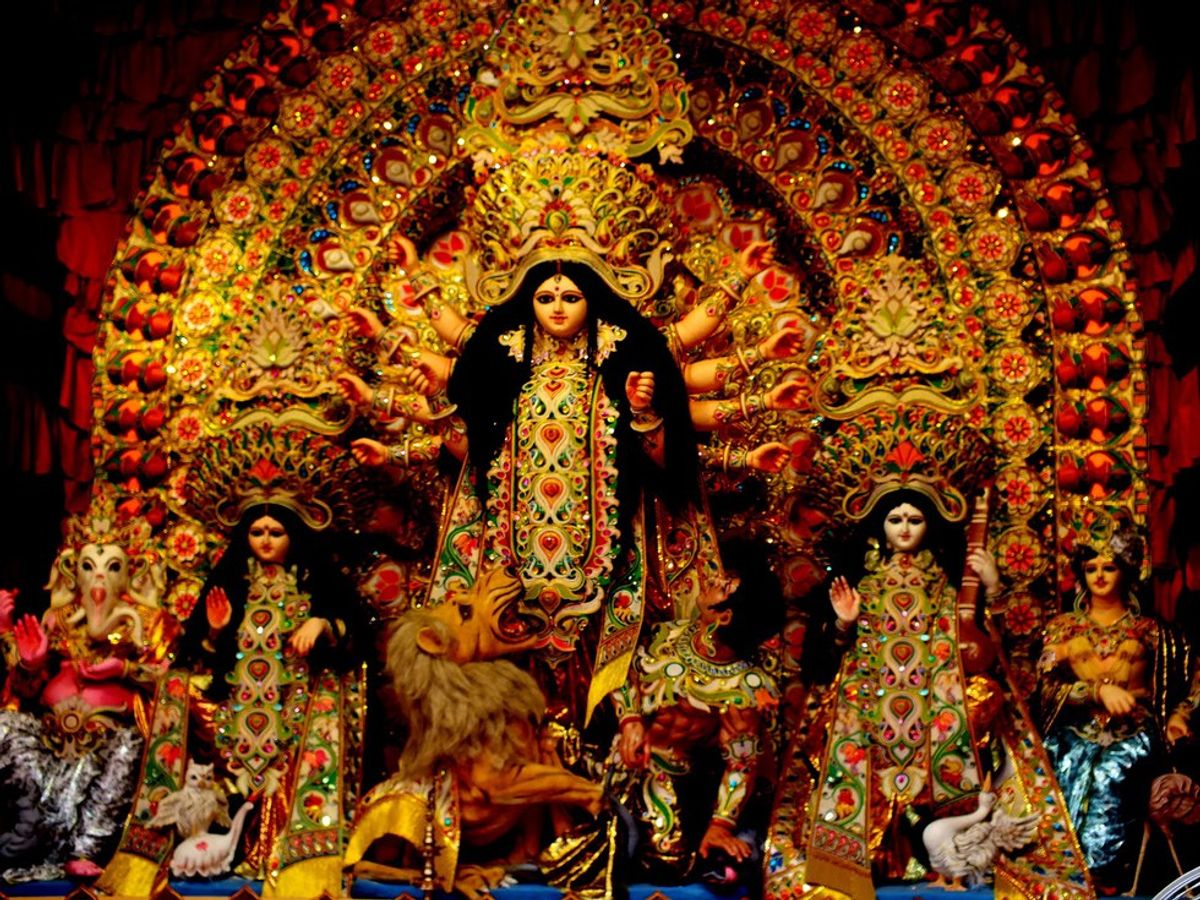 Who is Durga? What is Durga Puja? How and why is Durga Puja celebrated differently in Atlanta and Calcutta? The topic that I have chosen for my final project is a Hindu festival celebrated worldwide called Durga Puja. The festival celebrates life, culture, traditions and customs, commemorated by worshipping the Goddess Durga. Goddess Durga symbolizes the divine forces (positive energy) known as divine shakti (feminine energy/power) that is used against the negative forces of evil and wickedness. She protects her devotees from evil powers and safeguards them. She is known as having both creative and destructive powers. She is worshipped for killing Mahishasur, a powerful demon who was also known as the Buffalo Demon. The festival marks her return every year in the Bengali month of Aswin, mid-September to mid-October, and it also commemorates Lord Ram, known as Lord of Self-Control or Lord of Virtue, as he summoned Goddess Durga for her blessings in order to save Sita, his wife, from the clutches of Ravana, a demon. For the uninitiated, Durga Puja, meaning worship, or Pujo as we Bengalis pronounce it, is the Bengali-Hindu equivalent of Christmas. According to lore, the Goddess Durga spends the whole year caring for her husband, Lord Shiva, in the Himalayas. But for four golden days in autumn, she returns to her parents’ house, accompanied by her children, an occasion that mortals celebrate with pomp and pageantry. The essence of the festivities thus lies in coming home and being with all those whom one loves. Durga Puja is one of the biggest festivals in Bengal and it is the most important socio-cultural event in the Bengali society. The reason I chose this topic is because the festival is celebrated in Calcutta very differently than in Atlanta. In Calcutta the festival brings Bengalis together, celebrates their independence, and is a more joyous celebration than how it is celebrated in Atlanta. It seems like in Atlanta it is not being celebrated the way it should be. The festival here has been reduced to a competition to see which group gets the biggest audience and who has the most engaging decoration and performers.

My research will focus on understanding why one big puja broke into several others and to get a better understanding of how it is differently being celebrated here than in India and Bangladesh. I know some people will say that even in Calcutta and other places in the world Durga Puja is also characterized by competition and rivalry. Some will note that there is a competition about who has the most beautiful pandal (an pandal is a fabricated structure, either temporary or permanent, in a religious ceremony). In Hinduism, it is a temporary structure set up to venerate the goddess Durga during Durga Puja, known as puja pandal. I plan on interviewing a couple of leaders from various Durga Puja organizations in Atlanta, children and young adults since they will be the leaders in the future. I also plan on interviewing a few people who just recently came from Bangladesh and India and have them tell the difference between how it is celebrated there and here.

The sources I have found so far are two articles and a book. The first article that I chose is “Spaces of Recognition: Puja and Power in Contemporary Calcutta” by Anjan Ghosh. Ghosh analyzes the development of a Bengali festival in India. She does so by summarizing the region’s transformation from a rural to an urban world over the last 200 years, and by informing about how Durga Puja started and why it is celebrated every year in the Hindu month of Ashwin (September-October). She talks about both the colonial times and how the festival is celebrated. Another article, "Goddess Durga: The Female Form as the Supreme Being,” by Dollhouse talks about the significance of Durga and her relationship to other Hindu gods and goddesses. Durga, through all her forms, encompasses the essence of salvation and sacrifice. She is the mother of bounty and wealth, as also of beauty and knowledge, for her daughters are Lakshmi and Saraswati (Hindu goddesses of wealth and knowledge, respectively). Her children are connected and related to several other gods and goddesses in which her role plays as a mother, mother in law, a leader to offer blessings before war starts, etc. Finally, the book I chose is “Indian Society and the Making of the British Empire” by C. A. Bayly. Bayly talks about colonialism, but he goes more into depth about the period of India's transition to colonialism. Durga Puja has fairly modern beginnings and gained mass popularity among the Hindus in their effort to counter a cultural invasion by the Muslims and to subvert the British administrations in 17th and 18th centuries. After decades of repression under Muslim rulers, whose power was subdued under the British administration, the Hindu upper class of the eastern state of Bengal, took the opportunity to “carve itself a special space in the British administrative apparatus” while Durga Puja became “the site of this construction of the Hindu Bengali public sphere promoting its identity as the ultimate comprador class of British imperialism in India.” The difference between how Durga Puja is celebrated in Calcutta and Atlanta, is that Calcutta represents an affirmation of cultural and national independence and identity in a postcolonial world, whereas in Atlanta it is more of a social event, lacking this important political dimension.