Drexel University's Delta Phi Epsilon Raises More Than $65k For Cystic Fibrosis
Odyssey
CurrentlySwoonLifestyleHealth & WellnessStudent LifeContent InspirationEntertainmentPolitics and ActivismSportsAdulting
About usAdvertiseTermsPrivacyDMCAContact us
® 2023 ODYSSEY
Welcome back
Sign in to comment to your favorite stories, participate in your community and interact with your friends
or
LOG IN WITH FACEBOOK
No account? Create one
Start writing a post
Health and Wellness

DPhiE's 'Deepher Dude' male pageant is their biggest fundraiser of the year. 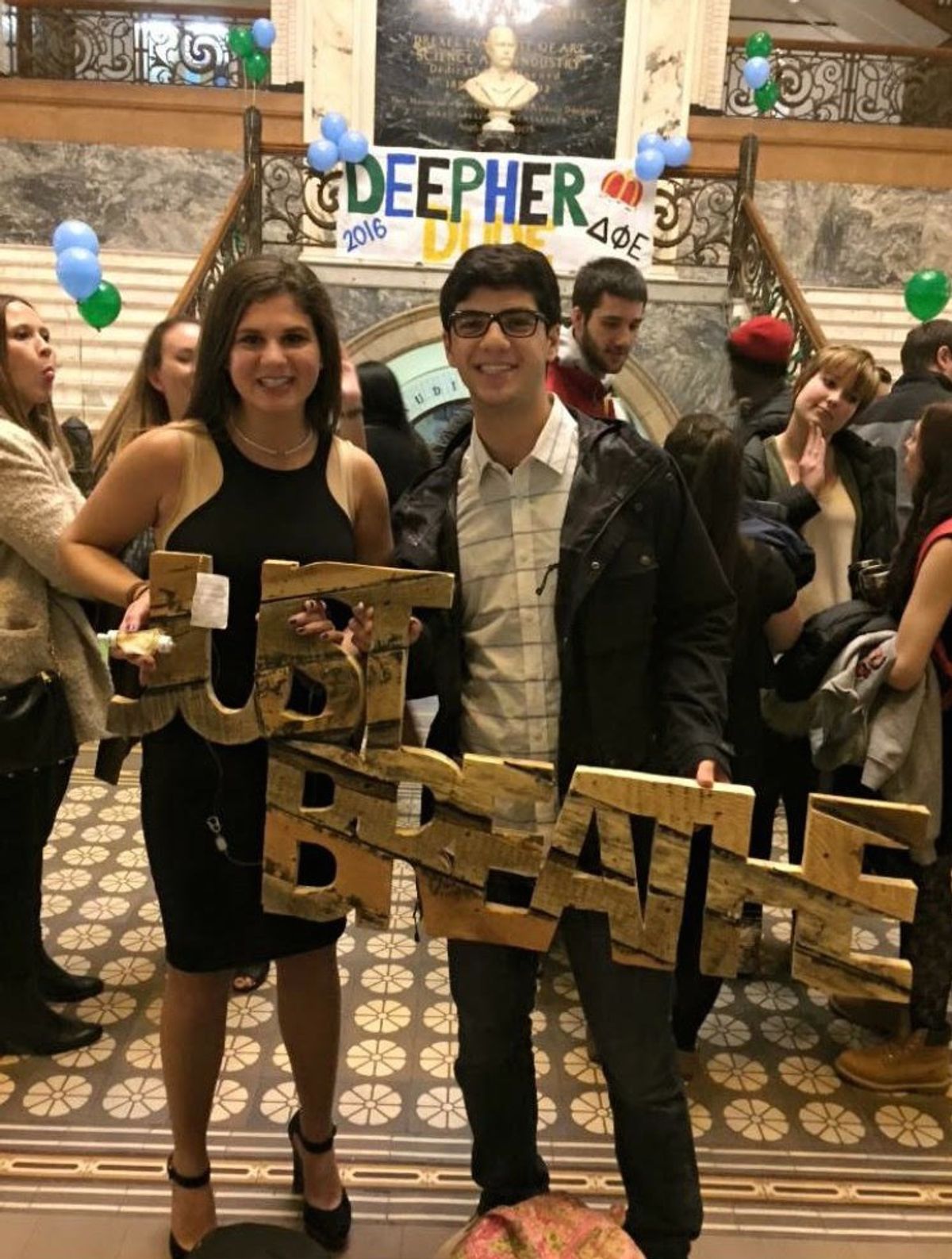 This particular sorority is notorious for exceeding fundraising expectations and has previously raised the most money for CF out of any other sorority or frat across the U.S. and Canada.

The Deepher Dude event draws male participants from the university who sing, dance, dress up and present their talents to the audience and a set of judges. The event closes with the crowning of a winner.

All male participants are required to raise $500 in advance and hold two fundraisers to support the cause.

The participants raised $30,000 even before the night of the event.

DPhiE paid for the pageant entirely through sorority dues and charged $5 for entry, with 100% of the funds raised going directly to the Cystic Fibrosis Foundation.

Kimmy Frank, a DPhiE sister and sibling to a CF patient, gave a speech at the event.

The pageant was planned since April 2016 and was coordinated by DPhiE sisters who designed and sold t-shirts, marketed the event via social media, and hosted a silent auction.

Members of the sorority also had help from their coworkers, friends, and family. Many corporate sponsors contributed funding and donated to the silent auction, including 6abcnews, JP Morgan, and Vera Wang.

I was particularly excited to feature this sorority, because had it not been for DPhiE my freshman year of college, I may not have wound up becoming the CF advocate I am today.

In 2013, I attended the Deepher Dude male pageant at LIU Post. It was there that I realized how important it is to fundraise and spread awareness for CF. Prior to that event, it had been years since I participated in a fundraiser for cystic fibrosis. In fact, I wasn’t very vocal about my illness at that time, either.

That year, I reached out to the Cystic Fibrosis Foundation and was given the opportunity to speak at the Nassau County Great Strides Walk. From then on, I remained active in the CF community and still strive today to raise awareness and spread hope to CFers and their families.

Jessica Franklin, a DPhiE sister at Drexel University, is a member of the Cystic Fibrosis Facebook group and posted about the event, which is how I learned about Drexel’s successful Deepher Dude pageant. Jessica, too, has CF.

Jessica was a member of participant Kevin Groome’s team, who is also a student at Drexel. Their team raised approximately $11,000.

Jessica says she joined DPhiE because of her admiration for the way in which her sisters push each other to be better. She was particularly excited about this year’s Deepher Dude because not only is she graduating in five weeks, but she also completed a CF-related diabetes clinical trial just in time to donate 100 percent of the trial’s compensation to the pageant.

There are so many ways for people with cystic fibrosis to get active and make a difference in the CF community. Jessica Franklin, her sisters at DPhiE and all of the pageant participants and supporters are just one small -- though very powerful -- piece of the puzzle. In one night, they managed to raise more than $65,000 of potentially life-changing funding.

Remember: Cystic Fibrosis receives zero government funding, so it is through events like Deepher Dude and the efforts of ordinary people that we see developments like Kalydeco and Orkambi.

Jessica, thank you for taking the time to chat with me and credit all of your sisters for their hard work to make Deepher Dude successful. I admire your enthusiasm and the home that you've found in your sorority. I am so grateful for everything you've done as an advocate for CF, and I wish you all the best in your future endeavors!

On behalf of the CF community, I'd also like to thank...

The sisters of DPhiE: I can't begin to explain how much your fundraising means to the community.

The Deepher Dudes, who hosted hot dog stands and other wild late-night fundraisers.

All of the participants, attendees, sponsors who contributed.