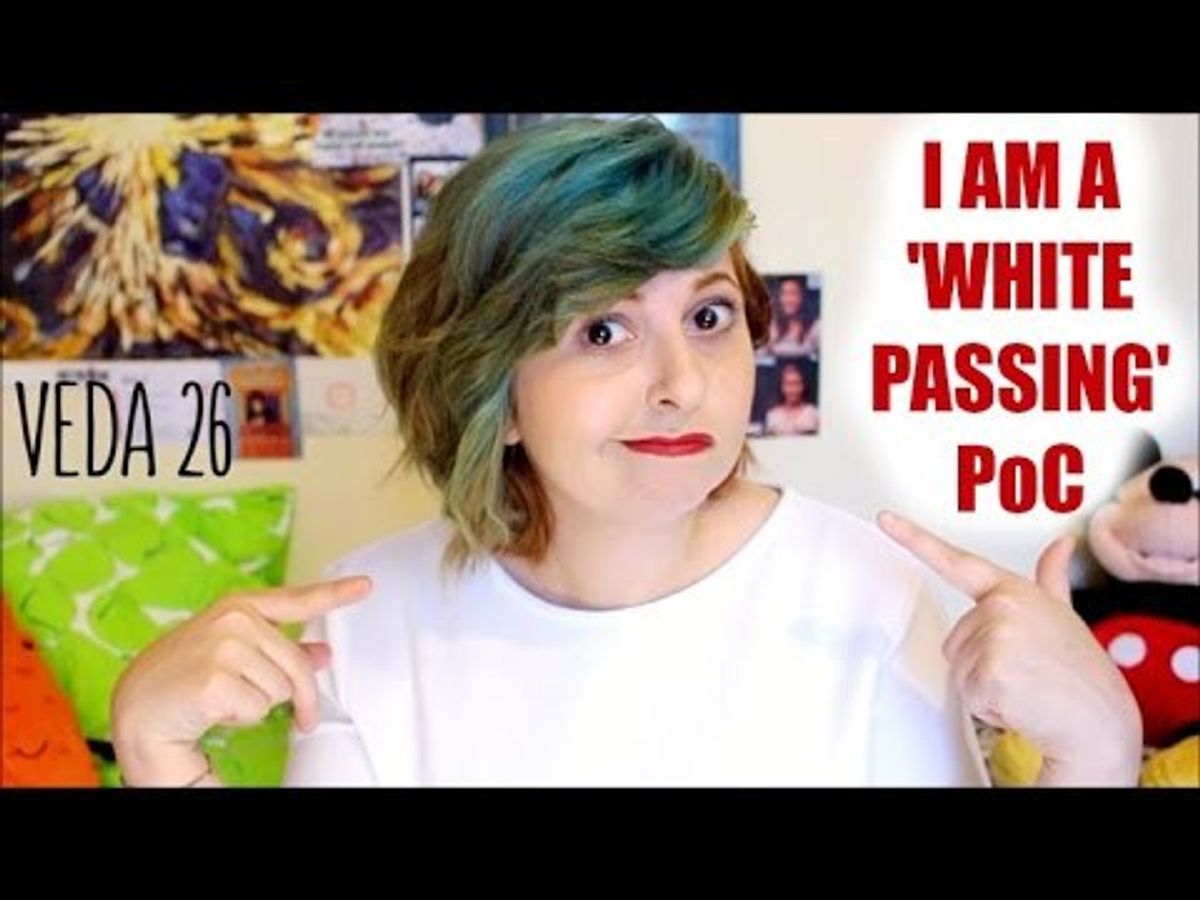 Racial passing is when a person of one racial group is also accepted as a member of a different racial group.

Many people of color occasionally "pass" as White, but does this give them the same privilege as those who identify as White?

There is a difference between "White Passing" privilege and "White Privilege." People who are "White Passing" do not always pass for White and also face their own kind of discrimination, identity issues, and alienation.

As a half-Asian and half-White woman of color, I have often been mistaken for White.

One of my high school friends was shocked when she found out I was half-Asian.

“You’re not Asian," she told me, "If you were Asian your eyes would look like this.” She used her fingers to make her eyes into tiny slits, laughing. I didn't know what to say.

My racial identity has been questioned or denied by those around me because my outward appearance does not match the cookie-cutter "Asian" appearance. I have brown hair and I am almost a foot taller than most of my Asian relatives, including my mom and my brother.

My mom is half Japanese and half Filipino. My brother looks much more Asian than me, specifically Japanese. He was asked if he needed a translator for his driving exam even though he spoke English to the test administrator. I don't usually have to handle this type of discrimination.

People have told me that my brother looks more Asian than me, as if I decided to look more White than him or as if I should laugh at my non-Asianness. I just nod, touching my lighter brown hair, not knowing how to respond.

Throughout my life, I have been much closer to the Asian side of my extended family than the White side. I can say with confidence that I feel more Asian than White.

What is it like to feel Asian you may ask? It is having millions of cousins who aren’t really related to you (and millions that are). It is huge weddings and eating lechon, bibingka, homemade egg rolls, leche flan, sushi, and siapao.

It is the smell of fried pork dipped in vinegar or warm fried bananas coated in crunchy sugar. It is saying “Oy!” after making a mistake, or stubbing your toe.

At first glance, people don’t see my experience of "Asianness." I've been mistaken for Latina, White, or Native American.

In some circumstances, I may have "White Passing Privilege," since I do not automatically face the stereotypes of a minority race. However, to fully benefit from White privilege, you must agree with the assumption people make that you are White.

Since I do not feel 100% White, I would say that I do not benefit from White privilege.

Just because I sometimes "pass" as White does not mean that I didn't hear the ever-popular "Asians are good at math" or "Asians are bad drivers" stereotypes. It doesn't mean that I've never been called exotic or asked if I am Chinese.

I still grew up in a world where the stars on TV or the Disney princesses did not resemble me or my family. I saw Mulan and thought I wasn't Asian enough to be as beautiful as her.

Marina Watanabe, a half-White, half-Asian blogger for Everyday Feminism, does a great job of addressing the issue of "White Passing Privilege" in one of her videos:

It was really confusing because I never knew what category people were putting me in or if they were perceiving me or treating me differently. It was frustrating because I was simultaneously made to feel that I was not white but then too white to be able to talk about it.

When I would talk about racism, I definitely had white friends tell me, 'But you’re like, basically white, Marina. You’re just like essentially a white person,' and then the next day, it would be like, “Oh, that guy is into you because you’re Asian and he likes Asian girls.” Like pick one or the other? You can’t have it both ways, but I would be white when it was convenient to them and Asian when it wasn’t."

Marina shows one of the main issues with assuming that people who are "White passing" have the same kind of privilege as White people: others try to define us, to fit us into a category.

In an i-D magazine article, "Uncovering the 'Privilege' of Being a White Passing Person of Colour," Niloufar Haidari, a white-passing British-Iranian woman, writes:

"Being a person of colour with white-passing privilege means that my experiences of discrimination will never be akin to those with darker skin, to those whose otherness is painted clearly across their face and not only evident when you are at a close enough range to recognise racialized features. However to have my identity reduced to white by well-meaning white friends and strangers on the internet is a silencing of my lived experiences...I appreciate the privilege my pale skin affords me, but allowing white people to decide the boundaries of what constitutes non-white is inherently dangerous, particularly as the borders of whiteness are policed often in self-interest rather than out of genuine attempts at inclusivity."

It is important not to silence the lived experiences of others, even if their racial appearance might suggest otherwise. Let others identify themselves and be understanding of the multitude of different human experiences.

To learn more about the experiences of mixed race people, or the issue of White passing privilege, visit:

A blog dedicated to the experiences of mixed race people: http://weareallmixedup.tumblr.com/

Everyday Feminism: On Being Non-White, But Passing Terribly Well