Why We Need Better Disability Representation On TV
Odyssey

Why We Need Better Disability Representation On TV

We've come a long way, but there's still more to do 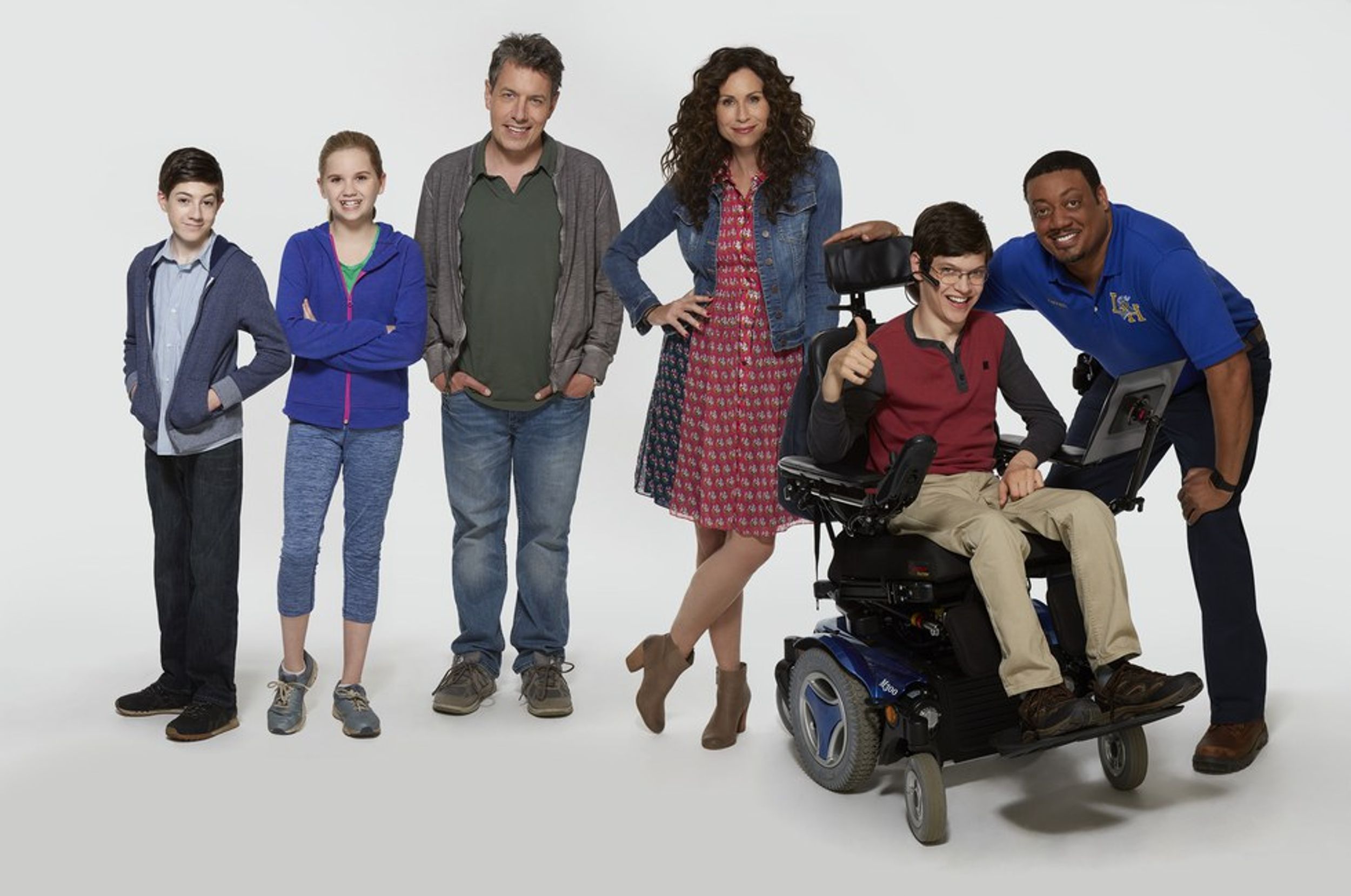 The popular and more recent show Glee received a great deal of criticism from the disabled community regarding the disabled character, Artie, portrayed by non-disabled actor Kevin McHale. In one particular episode, Dream On, Artie dreams of being a dancer and enters a dream sequence in which he dances to the Safety Dance, sans-wheelchair. It was as if the writers were unaware that people in wheelchairs can and do dance. There are competitions worldwide. By ignoring this fact entirely, Glee failed to represent disabled people as functioning human beings who can do anything they want.

Diff'rent Strokes is a sitcom that ran from 1978 to 1986. The show was already ahead of its time, as it dealt with themes such as race, gender roles, poverty, drugs, sex crimes, and even eating disorders. Melanie Watson, who was born in 1968 with osteogenesis imperfecta, a disease in which a person's bones fracture easily and occasionally causes smaller stature. When she was thirteen, she made her debut on the show in an episode called Count Your Blessings as Kathy. In this episode, the main character Arnold finds out that he will never grow taller than five feet. To make him feel better, Mr. Drummond invites his friend's daughter, Kathy. Kathy is small in stature and uses a wheelchair, but has a sunny disposition despite her day-to-day challenges. She wants to be an architect, and all of her designs include accessibility. She and Arnold become fast friends, and Kathy makes appearances in three more episodes after that. Diff'rent Strokes succeeded in casting a disabled actress to play a disabled character and to include her in more than one episode, but her purpose is to inspire Arnold and to remind him that his life isn't so bad. This trope is extremely harmful to the disabled community. In reality, disabled people are just normal people with jobs, families, likes and dislikes, and are living life the same as able-bodied people.

The 2016 Brazillian Netflix Original 3% featured a paraplegic character, Fernando, portrayed by Michel Gomes. 3% is a dystopian series about a world divided between the Inland and the Offshore. The Inland is a land of poverty and overpopulation. The Offshore is a sort of utopia that is never seen in the show, but described as the best place in the world that hardly anyone is good enough for. Every 20-year-old in the Inland has an opportunity to participate in the grueling "Process." Only 3% of candidates will pass on to the Offshore. 3% goes above and beyond most TV shows in the dystopian genre by addressing disability. Fernando's father conditioned him throughout his life to take his chance in the Process, and made him feel like he couldn't return home to him if he failed the Process. A doctor confirms that Offshore medicine can cure his paraplegia, if he passes. He doesn't want to accept the treatment, however. He says to his love interest, Michele:

It took me years to accept that I would never walk again. But I did it. I've spent my entire life in this wheelchair. This is who I am. And now they tell me that everything can change? That I don't have to be myself? That all the effort I've put in up to now was for nothing? F*ck walking, Michele. That's not why I came to the Process. I came here because I can pass. End of story.

Fernando resists being seen as pitiful or as an inspiration by the other candidates, despite having to play the "my life is miserable and this is my only chance" card at one point to pass one of the tests. He makes it into the 3%, proving that he is capable as he is. He also debunks the stereotype that paraplegics can't be intimate. His relationship with Michele is an essential part of the plot. The only problem is that he is portrayed in cripface. The actor that portrays him is able-bodied. Otherwise, he is an exceptional character and should be noted every time progress in disability representation is discussed.

Breakin Bad featured a disabled character in all 62 episodes: Walter White Junior, or Flynn, portrayed by RJ Mitte. Mitte was born with cerebral palsy. He said in an interview about his condition and getting the part:


I have a very low case of cerebral palsy. With CP, the responses to the brain are a little bit slower because at birth, the brain is damaged due to a lack of oxygen. Every type of brain damage is different. Mine affects my motor skills and the controlling of my muscles. Like, my arm jumps. While we were looking for the perfect part where I could use my disability to enlighten others, we were also looking for a good job. And when Breaking Bad came up, when I read the script, which was so well-written, I immediately thought, “I have to go for this.”

Walter Jr.'s purpose in the show is not to inspire the other characters, or to portray disabled people as pitiful burdens. He is a normal teenager who occasionally resents and rebels against his parents. Putting aside the fact that his father cooks meth, he is among the most normal teenagers on television.

Since Breaking Bad, there has been a shortage of disabled characters on TV. But in the fall of 2016, ABC delivered with a show called Speechless. The show is a sitcom that follows the DiMeo family. The parents, Maya (Minnie Driver) and Jimmy (John Ross Bowie) are severely disorganized and lead their three children in wacky misadventures. Their oldest son, JJ, has cerebral palsy. He uses a wheelchair and communicates with a board of words and letters that he can point to with a laser pointer attached to his glasses. JJ is portrayed by 18-year-old Micah Fowler, who also has cerebral palsy.

Speechless accurately portrays teenagers with disabilities as just teenagers with the same problems as everyone else. JJ's aide Kenneth (Cedric Yarborough) helps him navigate girls, popularity, and growing up. Like any older brother, JJ teases his younger siblings, Dylan and Ray, and also supports them in their own endeavors. JJ is a character with his own opinions, ideas, and quite a wit. He is not there for the able-bodied characters and viewers to be inspired by or to pity. He's just a regular kid who uses a wheelchair, and we need more people like him on TV.

My brother isn't a hero. I know him better than anyone. And I can tell you, in all honesty, he can be a real jerk. He teases me and tortures me, runs me over with his wheelchair. He told me I was adopted and my real mom was Nancy Grace! He isn't brave, either. He's just living his life. And there's nothing brave about that.


This is the kind of representation that we need. Ray says it well. Disabled people are just people who can be funny, mean, smart, brave and cowardly. Only mobility equipment sets them apart, but the people who are making that a significant factor are able-bodied people who don't know any better. This is why there needs to be more representation of disabled people like this in more shows and movies. It's the best way to reach all people and to normalize disability. Shows like 3% and Breaking Bad are definitely exceptional and on the right track, but Speechless never fails. It proves that disability representation is growing and can and will continue to thrive. In our lifetime, we might just reach more acceptance than ever before. Let's keep at this.

Caitlyn Morral
St Bonaventure University
3264
Wordpress
Odyssey recognizes that mental well-being is a huge component of physical wellness. Our mission this month is to bring about awareness & normality to conversations around mental health from our community. Let's recognize the common symptoms and encourage the help needed without judgement or prejudice. Life's a tough journey, we are here for you and want to hear from you.