"We have dance, music, a great group of people and I mean there's a pole." 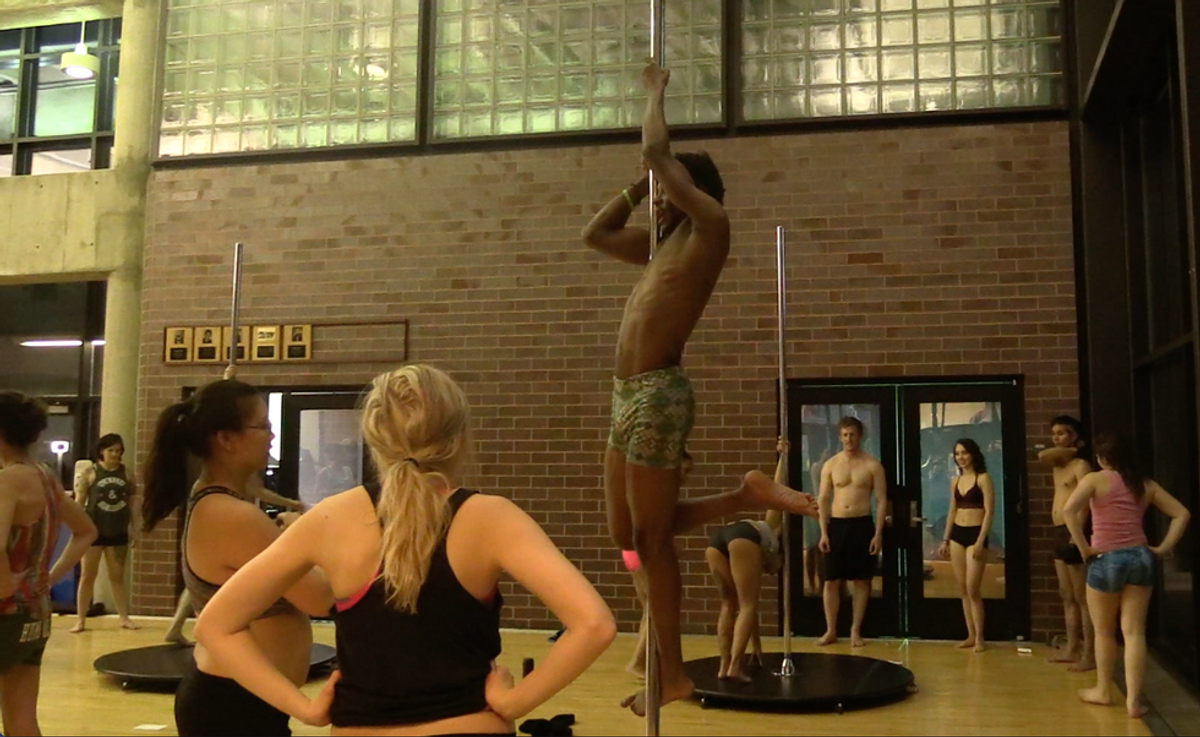 It’s Wednesday night and D’kilwayte Johnson is at the Auraria Campus Recreation Center for his workout. First, he starts with a warm-up, next he stretches, and then he hits the poles. He grabs on to the pole and swings around it, extending his legs up into the air like he’s doing a handstand. Every muscle in his body is working hard to hold him up. Johnson is a part of MSU Denver’s Vertical Fitness Club, where he does acrobatics and dance moves on a pole.

“Pole fitness is one of the most all intensive full body workouts you can ever do. It incorporates upper body, lower body, cardio, core, flexibility, and calisthenics,” said Johnson.

Johnson had first learned about the club two years ago after seeing a flier posted on the Auraria Campus, which said, “Have you ever wanted to learn how to pole dance?”

“I thought, ‘ha that’s going to be a big joke. Let me try it out.’ I went into a class and it blew my mind and I got really passionate about it.”

"It’s crazy how you never know where your passion’s going to arise,” Johnson said.

Like many people, Johnson had started out with hesitation, believing some of the stigmas associated with pole dancing, such as it being a very sexual type of dance.

“It’s college so people have this boxed idea about what’s allowed, but we show them the strength and fitness benefits of pole fitness,” Johnson said.

Now, Johnson is very experienced as he’s been pole dancing for two years and is the vice president of the club. He also helps teach the advance classes.

“My favorite part honestly, as an officer, is watching people get over the fears, excuses, or limitation they put on themselves that they thought they couldn’t do. When they make that move that they said they could never do, it empowers me,” Johnson said.

One of the hardest parts for Johnson when it comes to teaching vertical fitness is keeping people positive and motivated.

“I try to keep people on the goal, which is improving yourself and making sure you’re a better person and better all around.”

Johnson has some advice for anyone who is hesitant to try out vertical fitness.

“Everyone who’s nervous about it should come in and see the environment, see the community that we provide and that alone will keep you here. We care about you and we believe in encouragement,” Johnson said.

“Pole fitness is amazing. It’s not just a dance, not just fitness, not just an art, it’s sort of like a lifestyle.”