Did We Miss The Johnson?

Did We Miss The Johnson? 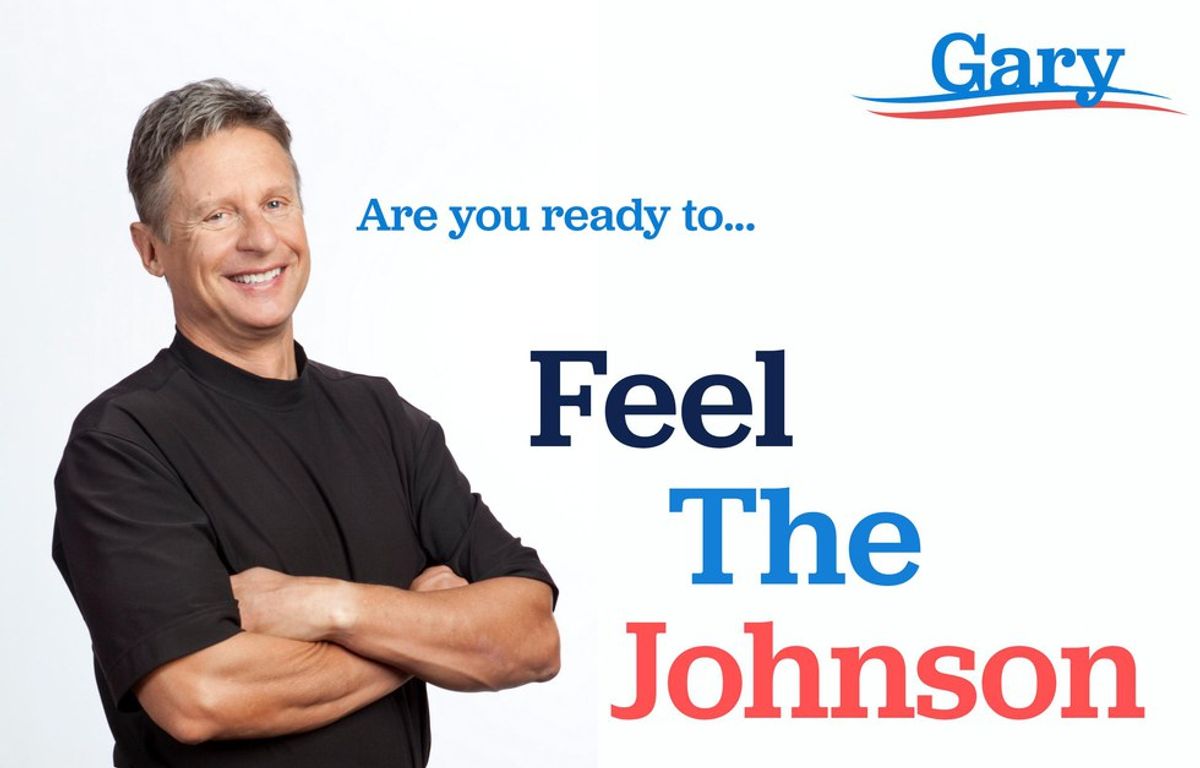 I’m wading in the political bullshit arena, folks. It is time to learn more about another choice. How many of you knew there was another candidate that can be voted for in this ugly presidential election? Anyone?

See, most people do not know there is another candidate that is more likely to do a better job of running the country than Trump or Clinton.

We have Trump, who wants to build a wall to keep people out of America the way Germany did.

Then there is Clinton, who as we all know, cannot tell a lie (cough cough).

Both of these candidates seem like poor choices, but what are we to do? Well, for starters, we could look more closely at other candidates. We don’t have to have a Democrat or Republican as a president. Abraham Lincoln was neither, and he was a great president and man. We will continue to get the same if we vote for more of the same. Who is Gary Johnson and what does he think about such issues as gun control, the IRS, and immigration?

Well, to be perfectly honest, I did not know anything about Gary Johnson until I decided to write this article. I hated the fact that no one was talking about him. It is obvious that Trump and Clinton do not want him joining in on the presidential debates because of all the actual sense he makes.

Gary Johnson, former governor of New Mexico for two terms, is our third party Libertarian presidential candidate. His views are completely different than those of Trump or Killary...I mean Hillary. With 12 percent at the polls, he only needs 3 percent more to join in on the televised debates. With all the sense he makes on many of his views, I can see why Trump and Clinton are trying to keep him off of televised debates. Well, let’s look at some of the issues Johnson covers in his platform.

While some of the key issues Johnson addresses might lean on the more controversial side, he seems to understand what the people need. From no taxes from corporations like Monsanto and Exxon-Mobile to gun control, he lays his viewpoints down. Johnson wants to abolish the IRS, do away with income tax returns so families can keep 100 percent of their checks, and pass a flat tax rate of 23 percent across the board. This would hit the middle and lower classes the hardest, but the “Fair Tax” would protect them from what is termed the “Consumption” tax.

Unfortunately, for most of the working class, this means a fight for wages because he does not support a federal minimum wage. This means that workers would have to accept lower wages to find work. This would not help to pull the poverty-stricken out of their hole, but it would motivate them to work harder and save money.

Johnson has no problem tackling the important issues, such as immigration. He doesn’t want to build a wall like Trump. He wants to make it easier for people to immigrate to America. He believes all a person is required to have or go through is a social security card and a background check so that they can be made to pay taxes. I think this is a shaky ground to take on this issue only because not all people intending harm have a criminal record. Also, not all immigrants have documentation to produce. If immigrants are fleeing their county from oppression, they more than likely do not have documents. Most leave with very few possessions. Considering America was founded on immigrants, I do not see this as an issue as long as they pay taxes.

As for gun control, I just love Johnson’s stance. There should be no restrictions. Restrictions have never stopped criminals from obtaining guns. I mean, has no one ever heard of the potato gun? Hello. Guns can be made. A law isn’t going to stop the illegal sale of firearms. Criminals, if serious, will always find a way to get what they want. This ties into his stance on prisons. He believes prisons should be private profit-making institutions. That the government should not regulate policies on how a prison is ran. I see an issue with this. Who would look out for the rights of inmates? On the other hand, if the inmates had followed the laws of the land, then they wouldn’t be in prison.

One issue I do not agree with is the abolishment of the Department of Education and doing away government medical care. It would all be abolished. People have a right to healthcare and education. Though the DOE is not doing their job on educational issues, such as Common Core learning, it is important to realize that our nation’s youth would suffer from this loss. As for healthcare, the young and old would suffer. Sometimes, the elderly only have Medicaid to rely on to help them. If it is privatized, how would they afford doctor’s visits let alone expensive medications that pharmaceutical companies continually take advantage of? See my point? Johnson’s views are definitely controversial, but make sense. Johnson is trying to save money, not waste it. He just needs to prioritize his issues and re-evaluate his stance on others.

Trump and Clinton would have you all believe there are no other choices, but there are. Johnson, though controversial, is at least another choice for the people. He may go about doing things differently, but maybe that is what America needs. If what has been tried before has failed, it is time to try something or someone else. Trump the thug, Hillary the liar, or Johnson the controversial?

At least know ALL the candidates before wasting your vote, because that one vote matters in a country constantly at war with itself. Sometimes, it might mean actually doing a little research. It isn’t always the devil you know