U.S Foreign Affairs: The Number of Wars the U.S is Currently Waging
Odyssey

U.S Foreign Affairs: The Number of Wars the U.S is Currently Waging

The seven one sided wars the U.S is currently waging, and other inconsistencies 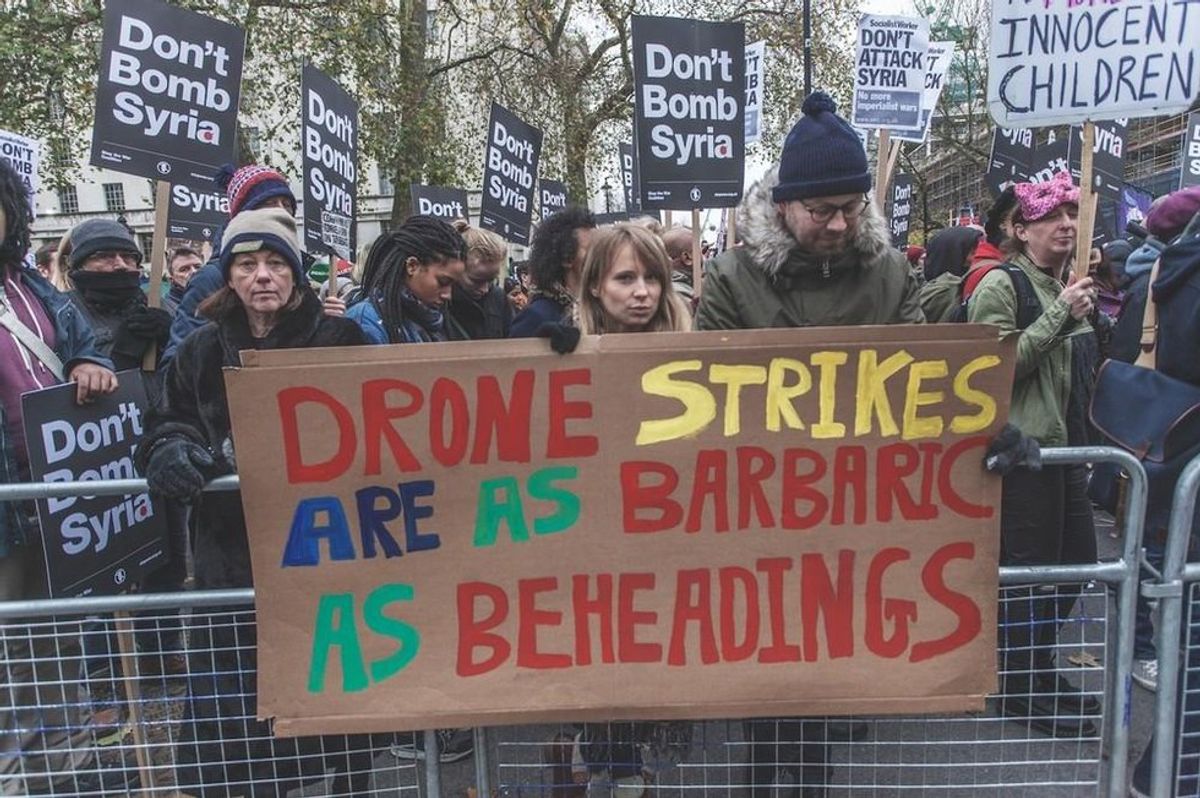 There are many who aren't aware of the status of the United State's foreign politics. Saying that American politics are flawed is an understatement, especially when considering the new President elect, who won the election by alienating all those who have suffered institutionalized discrimination and reinforced white supremacy. But I'm sure you as a reader, are sick and tired of reading about the same flawed domestic policies in your country. Instead, here's a glimpse at American foreign policy; the United States is currently waging war against seven, yes you read right, SEVEN countries.

Before we get to the seven countries that the United States is bombing, it's worth mentioning that ISIS, the Islamist terrorist group, is to Islam what the KKK or Westboro is to Christianity. Also, 95% of ISIS victims are in fact Muslim.

ISIS is understandably a major concern around the world. They're a threat to people's lives, democracy and freedoms. Not Islam. There are other terrorists groups that exist in the world such as the Taliban, ALQaeda, and Al Shabab to name a few. The United States took to addressing these terrorists by dropping bombs on the countries they allegedly inhabit, all the while disregarding the homes and lives of the people residing in the following countries.

The United States has been bombing Iraq for on and off for about 25 years. The reason varies from year to year, but ultimately the war started because of an arms conflict where the United states and the United Kingdom believed that Iraq allegedly had weapons of mass destruction. Yes, ladies and gentlemen, the war was started on a hunch and assumptions rather than fact.The Bush administration believed that Sadam and his government posed a threat to the United States because he maybe had WMD. After over half a million Iraqi lives were lost, in 2011 the United States troops left Iraq, only to come back in 2014 because of the threat of insurgency. Now, they're still bombing it because the United States has gathered intelligence that proves that Isis is located in Iraq.

The United States is waging a very complicated war again Syria, since there are at least four coalitions fighting each other. The four coalitions are the Supreme Military Council of the Free Syrian Army, The Islamic Front, The Syrian Islamic Liberation Front and Independent groups such as ISIS. Because there are so many groups and factions fighting each other, there is often confusion on who's on whose side. The United States goal is to knock our ISIS and Bachar Al Assad. So, while the United States is bombing Syria and most recently the last children's hospital in Alleppo, Syria is being ravaged by it's civil war. It has now become an immense humanitarian disaster as half of teh country's 22 million people have either been killed or displaced. On that note, there has been a little less than half a million confirmed deaths in Syria.

The United States invaded Afghanistan in 2001 in response to the tragic 9/11 attacks. They have been fighting them for fifteen years, making this war the longest war in American history. They targeted the terrorist groups the Taliban and AlQaeda, both splinter groups of the Mujaheddin. The interesting factoid here is that Al Qaeda and its former leader Osama Bin-Laden had ties to the CIA and the American government during the Soviet War in Afghanistan. The CIA allegedly armed and trained the mujaheddin to fight and win against the Soviet Union during the cold war. The Taliban was formed by the Pakistani Intellegence Agency (ISI), but was allegedly funded by the United States. The United States was believed to have provided $3 billion to build this Islamic group by providing them with ammunition during the Cold war. After the Soviet war ended, the United States lost track of the ammunition they provided the Taliban, and thus was taken aback when millions worth in weapons that they had provided were allegedly being used against them. In 2004, they started bombing the northern border of Pakistan along the Afghan border because it was believed that Taliban and Al Qaeda troops hide out there.

The United States war on Yemen is incredibly complex. The U.S is conducting drone strikes to target Al Qaeda camps but is also currently supporting Saudi Arabia's massive attack on the Houthis, a group of Yemeni rebels. Yemen is currently a monstrous humanitarian disaster as " 80% of the Yemeni population is in desperate need for humanitarian aid to meet even it's most basic needs." There is even evidence that Saudi Arabians, who are backed by the U.S, are deliberately targeting civilians. The UN confirms about 10,000 civilian deaths in the Yemen since the drone strikes started in 2015, killing almost 13 civilians a day. According to the Guardian, more than one third of all Saudi led air raids on Yemen have hit civilian sites such as school building, hospital markets, mosques and economic infrastructure.

According to the Associated Press, the aftermath of the strike turned the funeral location into a lake of blood and strewn unidentifiable body parts.

Libya is also dealing with political unrest, which first started at the hands of Muamar Gaddafi but now is because of civil insurgence and U.S bombing. In 2011, the United States bombed Libya to in order to get rid of Gaddafi. The consequence of his assassination was that the country descended into chaos and ISIS attempted to establish a stronghold over the Libyan government. The Americans also continued to bomb Libya because they didn't necessarily like the person they replaced Gaddafi with.

In March of 2016, an American drone strike killed 150 people in Somalia allegedly targeting the terrorist group Al Shabbab. The Obama Administration put out a statement that claimed that everyone of these 150 people was part of Al Shabbab. No one but the American government has independently confirmed that particular statement. The only information we have of the 150 deaths were from the government that killed them.

The question remains; who does the United States consider as an enemy combatant on the global War on Terror. According to the New York Times, the administration considers all military age males in a strike zone combatants... unless there is explicit intelligence posthumously proving them innocent. This is very convenient as it is scary to realize that any one male over the age of 18 standing near a location the U.S has decided to bomb because of suspicious terrorist activity is automatically an enemy of the U.S. What happened to innocent until proven guilty? Financially, since the beginning of the war on terror in 2001, the United States has spent around $4 trillion and about 1.3 million Americans have died in combat zones all around the world. To this day, there have been 4 million and it is even speculated that that number is nearer to 5 million deaths in the Middle East, a byproduct of the War on Terror.

ZERO of these one sided wars have been approved by Congress, and is thus more evidence of the rift in America's system of checks and balances.

Confused? Here's a simple breakdown of what's going on in the United States' foreign affairs. Educate yourself.