Devonta Freeman Does Not Have A Tevin Coleman Problem

Devonta Freeman Does Not Have A Tevin Coleman Problem

I got my Alabama coaches mixed up. My apologies. Steve Sarkisian is the new Atlanta Falcons OC, not Nick Saban. 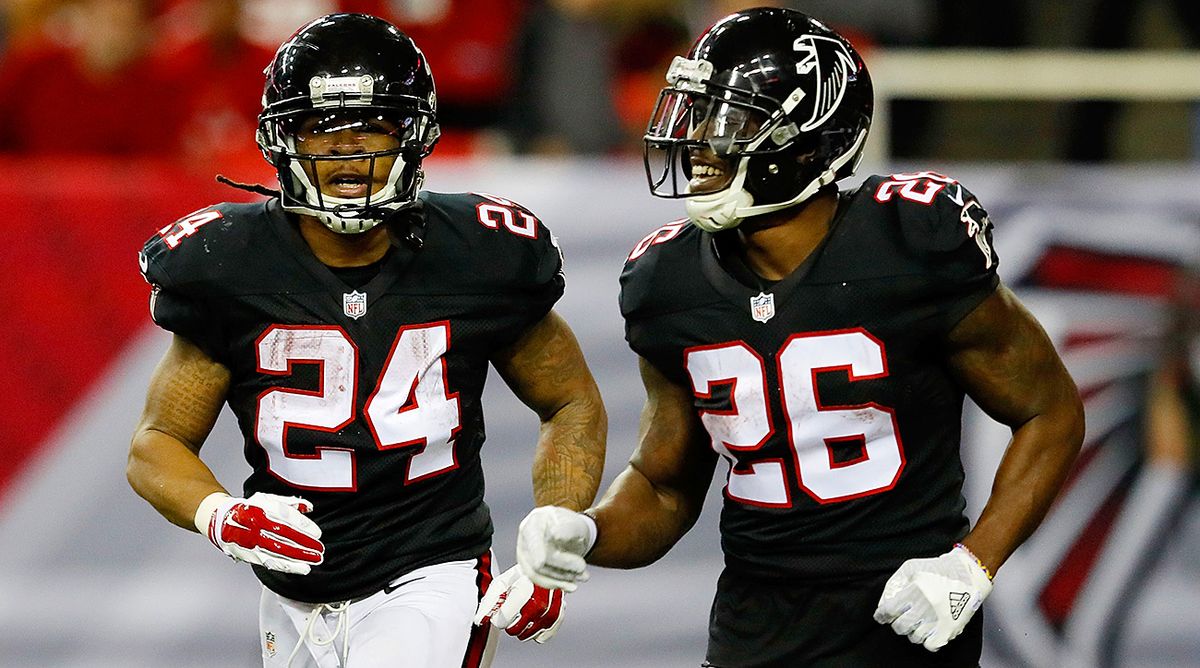 In 2016, the Atlanta Falcons seemed to have found their number one running back riding off of Devonta Freeman's hot end to the 2015 season and he finished the 2016 season 9th overall in rushing yards. However, the skeptics are running wild as they do in June and July believing that Devonta Freeman may have a problem named Tevin Coleman, the very man that was his backup/complimentary running back in Kyle Shanahan's offense.

Could Nick Saban's offense be run differently and favor Tevin Coleman's playing style over Devonta Freeman? Could Devonta Freeman fall back and Tevin Coleman be given a chance to step up? Perhaps both scenarios and others are possible. However, there is very little doubt that Devonta Freeman is not the starting running back for the Atlanta Falcons in 2017.

Watch Devonta Freeman run. Are you afraid yet? Watch some more. The way Devonta Freeman runs is unlike any other running back in the NFL. There's Leveon Bell who can sit back and wait for a hole to open up for 3 seconds. He's patient and that's his style. Devonta Freeman's style of running is the exact opposite. He will run you over and explode through the hole and if you're there when he is, you should be afraid. I've always described it as "aggressive." He runs like he's angry at something and that's a great quality in an NFL running back. His cuts are clean and crisp and his vision is on point.

However, Freeman doesn't have the size you'd expect for a back that runs the way he does. He's 5'9" and 209 lbs and that corresponds to most of the all-time leading rushers in the NFL who stand just under 6 feet and weigh in at the low-200s. This isn't to say that Devonta Freeman will join those players but he fits the measurements of players like Barry Sanders and Walter Payton who are known for their power running style, much like he is.

Tevin Coleman is a different type of running back. He isn't as aggressive when he runs. He makes his running style off of cuts and jukes. He's elusive and he has a knack for making defenders miss. He's fairly quick and he sees the field well. Coleman was used as a great pass catcher in Kyle Shanahan's offense and he occasionally filled in for Freeman every few drives. However, as common as running back committees are in the NFL, I don't see a situation, besides an inury to Freeman where Tevin Coleman's role is increased in Nick Saban's offense. That's not to say it's decreased but I don't see it increasing.

Freeman's cuts and more clean and crisp. Freeman is a better player in pass protection than Coleman. Freeman's is the better overall back, and Coleman, while a good running back, will not surpass Freeman as the starter in the Falcons offense in 2017. Except for one small caveat: Does Tevin Coleman fit his coaching style more?

Nick Saban has never been an offensive coordinator in the NFL, but he coached the Miami Dolphins in 2005-2006. The Dolphins running back during this time was Ronnie Brown while Ricky Williams was suspended for a whole season. Ronnie Brown is a pure power back. So, is this to mean that Nick Saban prefers power backs? Not necessarily.

Saban's running backs at Alabama since 2011 that made it to the NFL are Mark Ingram, Trent Richardson, Eddie Lacy, T.J. Yeldon, Kenyan Drake, and Derrick Henry. Three of those six backs are (or were) power backs. That's a pattern. Nick Saban has a history of coaching power backs, whether it be at Alabama or in his short tenure in the NFL.

Devonta Freeman even fits the offense Nick Saban is used to running, which means that it's even harder to believe that Tevin Coleman starts in Atlanta this coming season.