Dear Democrats, Get Some Morals On #MeToo Or Shut Up

It's your fault survivors have another hurdle to jump over to get justice. 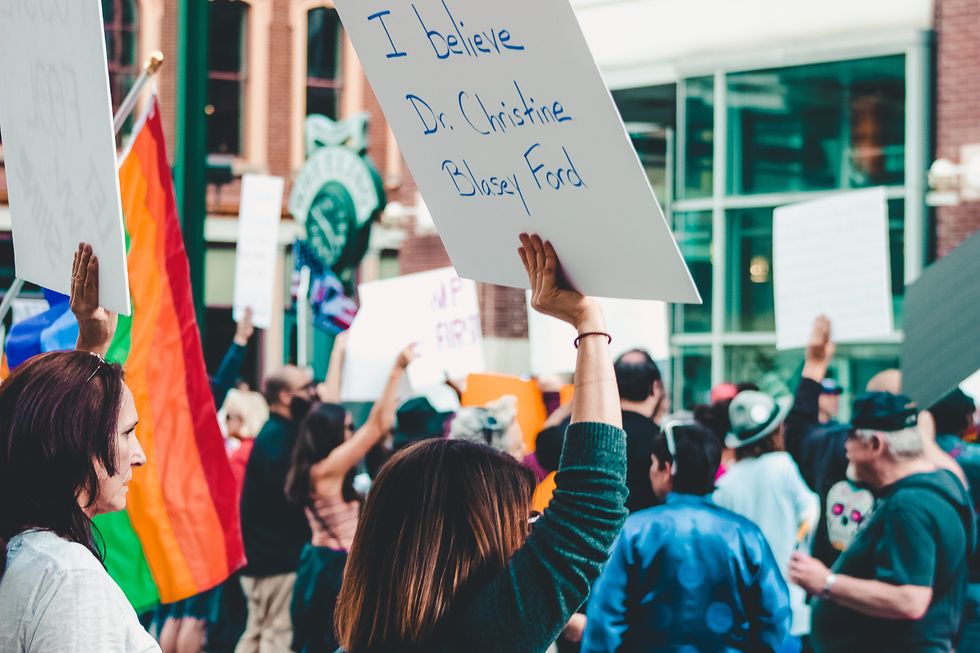 In America, we believe that all are innocent until proven guilty. So why did the Democratic party use a woman to try and derail a man's job interview?

What should have happened is an FBI investigation first, then let Dr. Ford come forward. However, instead of using common sense the Democrats used a woman in order to push their agenda, then they will leave her behind to deal with the aftermath.

We could also travel back in time and talk about the Duke lacrosse case. People were so eager to shame these boys for being white, thinking they are "privileged" and stating they have a "star status" on campus as evidence of guilt. When in actuality, there was no forensic proof of a sexual assault taking place at all.

Democrats have done nothing but sit on their hands and use sexual assault as an attention-getting, emotional, heart-wrenching, tool to gain votes. During the State of the Union, Democrats wore all black in support of the #MeToo movement, #TimesUp movement, and to protest against Trump and his "anti-women" conservative agenda. The hypocrisy in it all is that they are the people who could actually write legislation or get funding for programs in schools. They have the power, money, and sway to do something. Yet they sat on their hands and pouted.

In order to legitimize survivors' stories, we can't use them for your political warfare We are survivors, and we deserve to be treated as such.

What people will never understand is how much it changes your life.

Being sexually assaulted is the most dehumanizing, objectifying, and horrifying experience any person could go through. It changes how you view sexual relationships. It makes you never want to see any type of male doctor, or even be alone with a guy you don't know.

Yes, men and women can both be sexually assaulted, therefore it is not just a women's issue. No, it's not always some violent, random act of violence. Sometimes it might be someone you considered a friend, it could be a stranger or a significant other. Then there are the few of us who have been sexually assaulted multiple times by different people.

It can happen in an alleyway like in "Law and Order: SVU," or it can happen to you at a house party in your best friend's bed.

It's being told that survivors should speak up, and we should believe them, but being told that you deserved it because you are a republican makes us feel that our story isn't valid. So you stay silent in hopes to just keep your friends until you are having to hop off a back patio and jump a fence in stilettos and skinny jeans to get away from your attacker. Why? Because your "friends" decided you weren't worth protecting. Why doesn't anyone see me as who I am? See the value in me. Will everyone see me as damaged goods?

It's being made to feel like you are so worthless, that you get angry. You know you don't deserve to be treated like a disposable object. Then that anger turns into a hunger for justice, wanting to fight back against the intimidation. The drive to do whatever you can to share your story, no matter what those closest to you say or think. God knows what happened.

It's standing up for yourself, knowing your worth, and having to be fearless while facing the person who degraded you to your most vulnerable level.

"What were you wearing?"

"I don't know what you want me to do he's my friend and you're my friend."

"I mean I don't think anyone would care or support bringing an education program here."

"It makes me uncomfortable."

Uncomfortable is when your abuser and rapist's mother eggs you to "forgive and forget" what her son did to you. It's really uncomfortable when you have to sprint away from someone twice your size who is trying to grab you by the neck. Then living every day knowing these men will never face a single consequence for what they did to you, you lost your friends, and when your home you look over your shoulder everywhere you go.

But I'll be sure to remember your minor inconvenience, bad poll numbers, identity politics, and the fact you had to hear a real story, not a press-perfect one.

survivors
Report this Content
This article has not been reviewed by Odyssey HQ and solely reflects the ideas and opinions of the creator.

What It Means To Be An American